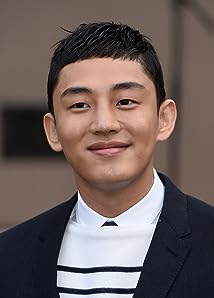 Yoo Ah-In is a South Korean actor and creative director. He has built a unique filmography that distinguishes him from other actors of the same age, playing a series of impressive characters in films and TV series. Not only is he known as an icon of youth in Korea, but also he has made remarkable achievements in numerous industry awards. Yoo is representing his generation by focusing on the growth of the characters he portrays, which is leading him to gain applause from the public.Yoo was born Uhm Hong-Shik on October 6, 1986, in Daegu, Korea, as the youngest of three children. In the first year of high school majoring in arts, he was discovered by a casting agent in front of the school and came up to Seoul by himself to attend auditions. In 2003, Yoo made his debut in a TV commercial for noodles. He then started to appear in teen-series Banolim (2003) and garnered a huge popularity from teenagers.After that, however, he halted his activities for one year to think about his identity and the path of acting without being influenced by popularity. Returning with independent film Uriege Naeireun Eopda (2006) and family-comedy Jochi Anihan-ga (2007), he attracted a lot of attention of critics and viewers as a promising newcomer. Also, he had played various roles across films and TV series, such as a lonely assassin in Choi Kang Chil Woo (2008), a patisserie aspirant and former boxer in Seoyang-goldong-yanggwajajeom Aentikeu (2008), a young assistant at the architectural office in Gyeolhon Motaneun Namja (2009), and a pizza delivery man in Haneulgwa bada (2009).In 2010, Yoo rose to prominence when he starred in Sungkyunkwan Scandal (2010), creating a syndrome called 'Geol-oh Love Sickness', which earned him praise as a unique actor in his generation. He was then cast in the coming-of-age film Wan-deuk-i (2011), met with critical and commercial success. This was followed by the first nomination for Best Actor in his career. Since then, he had gone on to star in a wide spectrum of works, including Paesyeon-wang (2012), Jang Ok-jung, Sarang-e Salda (2013), Kang-cheol-i (2013) and Uahan Geojinmal (2014).In 2014, Yoo played a genius pianist who falls in love in melodrama Milhwe (2014), where he actually played the piano. His performance was much appreciated by musical performers, critics and audiences. The next year, he achieved considerable critical and public acclaim for his brilliant portrayals of both the villain in big-hit action film Beterang (2015) and a tragic prince in historical film Sado (2015). This also led to gaining wider recognition as an established actor when he acted the protagonist in 50 episodes of Yungnyong-i Nareusya (2015) for six months. During this period, as he gained a huge popularity and received various accolades, the media called this phenomenon 'Ah-in Era'. Especially, he won the Best Actor award in the Blue Dragon Film Awards, which means that he is the first actor to win in this category under 30 in fifteen years.Later, he took a shot to romantic comedy in the ensemble film Joahaejwo (2016). The following year, he starred in fantasy TV series Sikago Tajagi (2017), where he played the double roles of a 2017 renowned writer and a leader of a resistance group in mid-1930s. Yoo will also feature in Lee Chang-Dong's film Beoning (2018), scheduled for release in 2018.Yoo is the one of the few actors who courageously expresses his own opinions about political and social issues in the Korean entertainment industry. This allows him to acquire an unconventional image of an artist who is questioning the world and the youth who is constantly seeking answers. He is also interested in the welfare of children and adolescents, such as writing a public letter to encourage participation in donation or creating a fund named after him as well as holding the charitable campaigns through his art studio. He has written poems personally and contributed articles to magazines. In addition, he is known as a fashionista and has caused a great sensation with the design of combination of Korean and English.In particular, he is a creative director of an art group and open gallery called Studio Concrete. Yoo is trying to capture the spirit of the times, displaying various exhibits and improving access to the arts for the public. - IMDb Mini Biography By: anonymous

Amazon Video has the most number of Yoo Ah-in’s flixes, followed by Rakuten Viki compared to other streaming platforms. See the full graph below.

On average the IMDB score of the movies that Yoo Ah-in has worked on is 7.0.

A love story of a young poor student pianist fell in love with his piano teacher, who was married to another man. Despite disapproval from the society and the "moral standard," their pure love for each other only grew stronger. Could she give up her status that she had long fought for? Could their love win over the adulterate world around them?

In the Joseon era, Kim Yoon-hee masquerades as a boy to earn a living as a book transcriber. Her family's dire circumstances and the encouragement of a noble's son finally drive her to attend Sungkyukwan University, forbidden for females.

Jong-su bumps into a girl who used to live in the same neighborhood, who asks him to look after her cat while she's on a trip to Africa. When back, she introduces Ben, a mysterious guy she met there, who confesses his secret hobby.

Han Yeo-reum and Nam Ha-jin are committed to each other. Before Ha-jin can propose, Yeo-reum's ex, Kang Tae-ha, reappears in her life. Yeo-reum and Tae-ha begin to work together and realize that they might want to rediscover old love.

Set in 18th century Korea, long-ruling King Yeongjo's struggle with his son, Sado, sees the king take extreme measures in order to deal with his heir.

A honest cop seeks justice for a common man against all odds. A rich boy seeks revenge on the cop.

Jin-hyeok opens a cake shop in an old antique shop, hiring Seun-woo, Korea's best pastry chef, who fell in love with him in high school. Also there, are Soo-young, crushing on Seun-woo, ex-boxer Gi-beom, and Seun-woo's French ex-boyfriend.