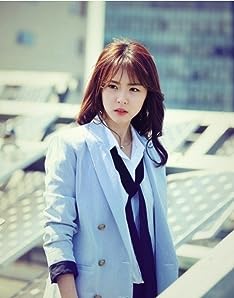 Lee Yeon-hee is a South Korean actress. She is also a singer and model. Lee Yeon-hee was born on 9th January, 1988 in the Haenam County, South Korea. She spent almost all her childhood in Bundang, Seongnam, Gyeonggi Do, South Korea. She took intense lessons in singing, acting and modeling when she was young and had entered into a contract with SM Entertainment. Lee studied at the Bun Dang High School, after which she went on to receive an acting degree from the Chung Ang University. Lee signed her first contract at the age of 13 in the summer of 2001 with SM Entertainment. SM Entertainment signed her as she won the Best Feature Award in the SM Entertainment Best Youth Contest. She won the award after singing to Dana, The Grace's 'Until The End Of The World'. She had also acted in a monologue and had performed freestyle modeling poses. As soon as she entered into the contract with SM Entertainment, she began training hard and soon started appearing in music videos. She debuted through 'Alone' by Moon Hee Joon in 2001. In the same year, she appeared in videos like 'Our Story' and 'Thanks God' by Moon Hee Joon, Oh Sang Eun and Kangta. Until 2004, she kept appearing in music videos. Some of them were 'Condition of My Heart' by Fly To The Sky, 'Hero' by Shinhwa, 'Memories', 'Pine Tree' and 'Propose' by Kangta, and in videos like 'My Little Princess' and 'The Way You Are' by TVXQ. In 2004, she made her television debut by playing young Jung Hwa in the television drama series Emperor of the Sea (2004). She kept doing minor roles in TV Series like Gajokggiri Wae Irae (2014) and Buhwal (2005) until she received a big break in 2006. She was cast as the lead in the MBC series Eo-neu Meot-jin Nal (2006). Later, in the same year, she made her debut on the big screen through the film, Baekmanjangja-ui cheot-sarang (2006). She was cast in the romantic comedy alongside Hyun Bin. In 2007, she was cast in 2 films namely, [ink=tt0889615] and Nae sarang (2007). She played Gook Young ran/ Grace in the 2008 TV series, Edeonui dongjjok (2008). In the same year, she appeared in movies like U-Turn (2008) and Soon-jeong-man-hwa (2008). Until then, she had appeared in lots of music videos. Some of them were 'Timeless' by Zhang Liyin, 'The Left Shore Of Happiness' by Zhang Liyin and 'M Net Love Song'. Lee experienced a relatively low point in her career during the year 2009-2010 as she did not have a single film or TV series to her name. She just made 2 music video appearances in those two years, which were 'Wizard of OZ' by Zlazziquai and 'Miss You' by S. M. Ballad. However, she came back with a banging the acting industry in 2011, when she was cast in the SBS series Paradise Ranch (2011). She returned to the big screen in the same year through the film, Mai wei (2011). She became part of the mystery crime thriller TV series Yooryung (2012) along with Ji-seob So as the lead character. Lee played a supporting role in the martial arts historical drama series, Guga-ui Seo (2013). She was cast as the lead in the South Korean television series, Miss Korea (2013). In 2013, she was also cast for a film, Gyeol-hon-jeon-ya (2013), in which she was cast as So Mi, a nail artist. In 2015, she played Hisako, the lead female character in the period comedy adventure film, Detective K: Secret of the Lost Island (2015). In the same year, she was cast as Princess Jeongmyeong, the lead female character in the 50-episode MBS TV series, Hwajeong (2015). She was cast alongside Jin-gu Yeo in the TV series Dashi Mannan Segye (2017) in 2017. Later, she played Yoon So So, alongside Yong-hwa Jung in the television drama series, Deo Paekiji (2017). - IMDb Mini Biography By: Sam013024

Rakuten Viki has the most number of Yeon-hee Lee’s flixes, followed by Kocowa compared to other streaming platforms. See the full graph below.

On average the IMDB score of the movies that Yeon-hee Lee has worked on is 6.9.

A drama based on a cyber investigation squad. Kim Woo-Hyun is the only son of a high ranking police officer. Woo-Hyun entered the police academy ranked first and graduated from the academy ...

Sung Hae Sung (Yeo Jin Goo, Circle: Two Worlds Connected) is a cheery high school student. Being the eldest sibling, he wants to provide for his family instead of going to college. On the ...

Yoon So-So (Lee Yeon-Hee) works as a travel guide in France. She leads a group of tourists on a package tour. The travelers all have their own stories. San Ma-Roo (Jung Yong-Hwa) joined the...

Crime,Drama,Fantasy
The Game: Towards Zero (2020)

When Kim Tae Pyung looks into a person's eyes, he can see the moment preceding their death. He partners with Detective Seo Joon Young to solve a serial murder case.

Kim Hyung Joon, owner of a small cosmetics company and riddled with debts, decides to sponsor a contestant for 'Miss Korea' hoping that will help promote their products, and so he turns to Oh Ji Young the girl he broke up 10 years before.