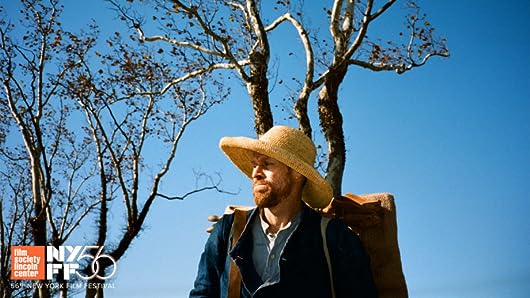 Having made over one hundred films in his legendary career, Willem Dafoe is internationally respected for bringing versatility, boldness, and dare to some of the most iconic films of our time. His artistic curiosity in exploring the human condition leads him to projects all over the world, large and small, Hollywood films as well as Independent cinema.In 1979, he was given a role in Michael's Cimino's Heaven's Gate, from which he was fired. Since then, he has collaborated with directors who represent a virtual encyclopedia of modern cinema: Kathryn Bigelow, Sam Raimi, Alan Parker, Walter Hill, Mary Harron, Wim Wenders, Anton Corbijn, Zhang Yimou, Wes Anderson, Martin Scorsese, David Lynch, Oliver Stone, William Friedkin, Werner Herzog, Lars Von Trier, Abel Ferrara, Spike Lee, Julian Schnabel, David Cronenberg, Paul Schrader, Anthony Minghella, Scott Cooper, Theo Angelopoulos, Christian Carion, Robert Rodriguez, Phillip Noyce, Hector Babenco, John Milius, Roger Donaldson, Paul McGuigan, Lee Tamahori, Roger Spottiswoode, Paul Weitz, Daniel Nettheim, The Spierig Brothers, Andrew Stanton, and Josh Boone.Dafoe has been recognized with four Academy Award nominations: Best Actor in a Supporting Role for Platoon, Best Actor in a Supporting Role for Shadow Of The Vampire, for which he also received Golden Globe and Screen Actors Guild nominations, Best Actor in a Supporting Role for The Florida Project, for which he also received Golden Globe and Screen Actors Guild nominations, and most recently, Best Leading Actor for At Eternity's Gate, for which he also received a Golden Globe nomination. Among his other nominations and awards, he has received two Los Angeles Film Critics Awards, a New York Film Critics Circle Award, a National Board of Review Award, an Independent Spirit Award, Venice Film Festival Volpi Cup, as well as a Berlinale Honorary Golden Bear for Lifetime Achievement.Willem was born in Appleton, Wisconsin, to Muriel Isabel (Sprissler), a nurse, and William Alfred Dafoe, a surgeon. He is of mostly German, Irish, Scottish, and English descent. He and his wife, director Giada Colagrande, have made three films together: Padre, A Woman, and Before It Had A Name.His natural adventurousness is evident in roles as diverse as the elite assassin who is mentor to Keanu Reeves in the neo-noir John Wick, in his voice work as Gil the Moorish Idol in Finding Nemo and as Ryuk the Death God in Death Note, and as the obsessed FBI agent in the cult classic The Boondock Saints, Sean Baker's The Florida Project and Kenneth Branagh's Murder on the Orient Express. That adventurous spirit continues with upcoming films including James Wan's Aquaman, Robert Eggers's The Lighthouse, Edward Norton's Motherless Brooklyn and Julian Schnabel's At Eternity's Gate in which he stars as Vincent Van Gogh.Dafoe is one of the founding members of The Wooster Group, the New York based experimental theatre collective. He created and performed in all of the group's work from 1977 thru 2005, both in the U.S. and internationally. Since then, he worked with Richard Foreman in Idiot Savant at The Public Theatre (NYC) and most recently two international productions with Robert Wilson: The Life & Death of Marina Abramovic and The Old Woman opposite Mikhail Baryshnikov. He is developing a new theatre piece, directed by Romeo Castellucci, based on Nathaniel Hawthorne's The Minister's Black Veil. - IMDb Mini Biography By: Anonymous

Amazon Video has the most number of Willem Dafoe’s flixes, followed by Vudu compared to other streaming platforms. See the full graph below.

On average the IMDB score of the movies that Willem Dafoe has worked on is 6.5.

A continuation of Spider-Man Far From Home

After his son is captured in the Great Barrier Reef and taken to Sydney, a timid clownfish sets out on a journey to bring him home.

A young soldier in Vietnam faces a moral crisis when confronted with the horrors of war and the duality of man.

Musician John Lurie knows nothing about fishing, but that doesn't stop him from embarking on fishing in exotic locations with friends.

The story of Togo, the sled dog who led the 1925 serum run yet was considered by most to be too small and weak to lead such an intense race.

Two F.B.I. Agents with wildly different styles arrive in Mississippi to investigate the disappearance of some civil rights activists.