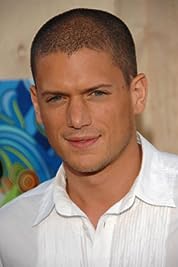 Wentworth Miller is a compelling and critically acclaimed actor whose credits span both television and feature film.Wentworth Earl Miller III was born June 2, 1972 in Chipping Norton, Oxfordshire, England, to American parents, Joy Marie (Palm), a special education teacher, and Wentworth Earl Miller II, a lawyer educator. He has two younger sisters, Gillian and Leigh. His father, who is black, is of Afro-Jamaican and African-American (along with English and German) descent. His mother, who is caucasian, has Dutch, French, Swedish, Lebanese/Syrian, Austrian, and Rusyn ancestry.When Miller turned a year old, his family moved to Park Slope, Brooklyn, New York. His father became an assistant district attorney over there. Wentworth retains a dual citizenship, but affirms that he has always been an American. He comes from a diverse background. Wentworth attended Midwood High School in Brooklyn, where he was a member of Sing!, an annual musical production that was started by Midwood. He later on transferred to Quaker Valley Senior High School in Sewickley, Pennsylvania. Wentworth was a straight As student in high school and was involved in the AV club and school newspaper. After graduating from high school in 1990, he attended Princeton University. He was also a cartoonist for the school paper and a member of the A Capella group, The Princeton Tigertones, where he sang baritone. It was then that he realized he was interested in performing in front of big and small audiences. Five years later, in 1995, he graduated from Princeton with a bachelor's degree in English Literature and moved to California. That same year, he was hired by a small company who made movies for television. About a year and a half later, he realized that he had unconsciously moved to Los Angeles to be an actor. He then decided to quit his job at the production company even after his employee at the production company had offered him another stable job position.Unfortunately for Wentworth, breaking into the industry was a tough job for him. He worked as a temp at several production companies before ending up working as a temp for his former employee's production office. It wasn't too long before Wentworth started landing guest roles on show such as Buffy vampyrdödaren (1997), Cityakuten (1994), and Popular (1999). He also starred in the Hallmark series, Dinotopia (2002), playing the character, David Scott. These guest spots later on led to a role in the feature film, The Human Stain (2003), which happened to be his breakthrough role, alongside Nicole Kidman and Sir Anthony Hopkins, where he played the younger version of Anthony Hopkins' character, Coleman Silk. Although the film didn't fare well in movie theaters, it was well received by viewers and critics, further catapulting Wentworth to bigger stardom.After The Human Stain (2003), he appeared in the movie _Underworld_, as Dr Adam Lockwood, opposite Kate Beckinsale and Scott Speedman, playing the voice of EDI. He also guest-starred in the series finale of CBS' Joan of Arcadia (2003), as Ryan Hunter, a charming-yet-sinister man who revealed to Joan that he also spoke to God. It was reported that his character would be Joan's greatest challenge, but in May, CBS decided to cancel the show, leaving fans to wonder what might have been. In 2005, Wentworth appeared in the pilot of Ghost Whisperer (2005) before eventually starring on FOX network's Prison Break (2005). Wentworth played the role of Michael Scofield, a character helping his brother, Lincoln Burrows, escape death row after being found guilty of a crime he did not commit. He stars alongside actors, Dominic Purcell, Amaury Nolasco and Robert Knepper. Prison Break (2005) became an instant hit and Wentworth secured a spot among viewers as one of the hottest up-and-coming actors around. His performance in the show earned him a Golden Globe nomination, a Saturn award nomination, as well as three Teen Choice Award nominations. The Brooklyn native also appeared in two of Mariah Carey's music videos, "It's Like That" and "We Belong Together" as Mariah's love interest.Brett Ratner, who was signed on to direct both the music videos, directed the pilot episode of Prison Break (2005) and already knew who Wentworth was. Brett then brought up the idea to the songstress about using Wentworth in the videos. After showing Mariah pictures of Wentworth, she agreed to use him and Wentworth managed to work on both the videos and Prison Break with the help of crew members who constructed a special set on the set of the videos. Wentworth even admits that the two days he spent working with Mariah, was in fact, one of his career highs - even topping anything he's ever done prior to Prison Break (2005) because it gave him so much exposure. Wentworth describes himself as a very private person who likes to spend time just relaxing at home when he's not working. He enjoys swimming, reading, taking naps as well as going to different restaurants every week. He enjoys spending time at The Art Institute of Chicago because he believes that music, painting, movies and theater can all contribute to the work of an actor.In 2013, he returned to his writing roots, linking up with acclaimed director Chan-wook Park and penning the screenplay for the film _Stoker_, which he submitted under an alias, Ted Foulke. He has also written a screenplay for a prequel called Uncle Charlie. - IMDb Mini Biography By: PMK/HBH and Anastasia Andrew Veno

Amazon Video has the most number of Wentworth Miller’s flixes, followed by Vudu compared to other streaming platforms. See the full graph below.

On average the IMDB score of the movies that Wentworth Miller has worked on is 6.6.

Due to a political conspiracy, an innocent man is sent to death row and his only hope is his brother, who makes it his mission to deliberately get himself sent to the same prison in order to break the both of them out, from the inside.

After India's father dies, her Uncle Charlie, whom she never knew existed, comes to live with her and her unstable mother. She comes to suspect this mysterious, charming man has ulterior motives and becomes increasingly infatuated with him.

After a plane crash, two opposing half-brothers find themselves on an amazing lost island where enlightened pacifist humans and intelligent talking dinosaurs have created a utopian medieval society. But imminent disaster approaches.

Five married guys secretly share a penthouse loft in the city where they can carry out hidden affairs. But the fantasy becomes a nightmare, when they discover the dead body of a woman in the loft one of the group must be involved.

While still out to destroy the evil Umbrella Corporation, Alice joins a group of survivors living in a prison surrounded by the infected who also want to relocate to the mysterious but supposedly unharmed safe haven known only as Arcadia.

A mother and her young son release unimaginable horrors from the attic of their rural dream home.