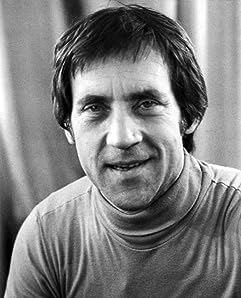 Vladimir Vysotsky was an iconic Russian actor, singer-songwriter and public figure, who wrote over 700 songs and gave over 2000 public and private performances as an anti-establishment singer of the 60s and 70s in the former Soviet Union. He was one of the Soviet Union's boldest and most celebrated actors who promoted individual freedom and helped lift Russian youth out of the state of apathy and fear under the Soviet dictator Brezhnev. In the movies, Vysotsky was best known as nifty detective Zheglov in Mesto vstrechi izmenit nelzya (1979) by director Stanislav Govorukhin.He was born Vladimir Semenovich Vysotsky on 25 January 1938, in Moscow, then the capital of the Soviet Union. His father, Semen Volfovich Vysotsky, was Jewish; he served in the Red Army during WWII, and was decorated for his courage rising to the rank of a Colonel. His mother, Nina Maximovna Seregina, was Russian; she worked as Russian-German interpreter. During WWII, Vladimir Vysotsky with his mother escaped from the advancing Nazis by evacuation from Moscow to Orenburg province in Siberia. After the war, the parents divorced and he was living with his father and stepmother in a Soviet Military garrison in East Germany. There, from 1947 to 1949, Vladimir Vysotsky was taking piano lessons; he also became an avid movie watcher.Upon returning to Moscow in the fall of 1949, he settled on Bolshoi Karetny, and went to the all-boys school No 186, from which he graduated in 1955. While at school, he attended the drama class of V. Bogomolov, an actor of the Moscow Art Theatre. From 1956 to 1960, he studied acting under Pavel Massalsky and Boris Vershilov at the Moscow Art Theatre Studio, graduating in 1960 as actor. He briefly worked at Moscow Pushkin Drama, then joined the troupe at the Taganka Theatre. Vysotsky made his film debut in Sverstnitsy (1959).In 1961, in Leningrad, during filming of 713 prosit posadku (1962) Vladimir Vysotsky met actress Lyudmila Abramova who became his wife and mother of his two sons Arkady Vysotsky (born 1962) and Nikita Vysotskiy (born 1964). He was later married to the French-Russian actress Marina Vlady. During the 70s, he toured all over the former USSR and also made stage appearances in France, USA, Germany, Hungary, Poland, and Yugoslavia.Breaking all traditions, Vysotsky appeared as Hamlet with the guitar in the Shakespare's play directed by Yuriy Lyubimov. Vysotsky's Hamlet, dressed as a contemporary young man and playing his guitar, shook the Moscow establishment by overthrowing the traditional interpretation of the Shakespearean character. Vysotsky's shows was always sold out, and tickets to his performances were the most demanded "currency" in Moscow.His opposition to Soviet authorities resulted in periodic bans of his songs. In 1968 Vysotsky wrote an open letter to the leading Soviet newspaper "Pravda" asking for fairness and equal rights; he requested that the official ban on his songs shall be lifted. That same year the first official recording of Vysotsky's songs from the film Vertikal (1966) was released on Melodia label and quickly became the best-selling record in the Soviet Union. However, the Soviet authorities stubbornly suppressed Vysotsky's film and music career, causing him much moral pain and suffering.During the late 60s and 70s Vysotsky had problems with drugs and alcohol and suffered of a severe heart disorder which sent him into cardiac arrests on several occasions. In one case, his wife, Marina Vlady, noticed that he collapsed at home and saved his life by calling an ambulance, so he was hospitalized. He died while asleep at his home in Moscow, on 25 July, 1980. His death caused a considerable mourning in Russia. Thousands lined up to attend his funeral at Vagankovskoe Cemetery in Moscow. His numerous fans across Russia and the world continue the tradition of memorial concerts and gatherings on the 25th of July every year. His flower-adorned grave is a site of pilgrimage for his fans.Vladimir Vysotsky's remarkable voice and style has been a lasting influence on many of Russia's actors and musicians. Though he was ostracized by the Soviet officialdom, he achieved remarkable fame during his lifetime, and remains a towering figure in Russian popular culture. Among his most notable followers and devotees are Mikhail Boyarskiy and Yuriy Shevchuk. - IMDb Mini Biography By: Steve Shelokhonov

Amazon Video has the most number of Vladimir Vysotskiy’s flixes compared to other streaming platforms. See the full graph below.

On average the IMDB score of the movies that Vladimir Vysotskiy has worked on is 7.4.

After WWII is over, a young officer Volodya Sharapov returns to Moscow to work in MUR - Moskovskiy Ugolovny Rozysk (Moscow Criminal Police). There he meets Gleb Zheglov who is a chief of a ...

This is a film about freedom. It opens to the songs of Vysotsky, about the journey across Siberia he planned with his friend Vadim Tumanov, to the most horrible death camps of the Gulag, ...