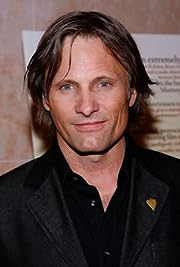 Since his screen debut as a young Amish farmer in Peter Weir's Witness: Témoin sous surveillance (1985), Viggo Mortensen's career has been marked by a steady string of well-rounded performances.Mortensen was born in New York City, to Grace Gamble (Atkinson) and Viggo Peter Mortensen, Sr. His father was Danish, his mother was American, and his maternal grandfather was Canadian. His parents met in Norway. They wed and moved to New York, where Viggo, Jr. was born, before moving to South America, where Viggo, Sr. managed chicken farms and ranches in Venezuela and Argentina. Two more sons were born, Charles and Walter, before the marriage grew increasingly unhappy. When Viggo was seven, his parents sent him to a a strict boarding school, isolated in the foothills of the mountains of Argentina. Then, at age eleven, his parents divorced. His mother moved herself and the children back to her home state of New York.Viggo attended Watertown High School, and became a very good student and athlete. He graduated in 1976 and went on to St. Lawrence University in Canton, New York. After graduation, he moved to Denmark - driven by the need for a defining purpose in life. He began writing poetry and short stories while working many odd jobs, from dock worker to flower seller. In 1982, he fell in love and followed his girlfriend back to New York City, hoping for a long romance and a writing career. He got neither. In New York, Viggo found work waiting tables and bar tending and began taking acting classes, studying with Warren Robertson. He appeared in several plays and movies, and eventually moved to Los Angeles, where his performance in "Bent" at the Coast Playhouse earned him a Drama-logue Critic's Award.He made his film debut with a small part in Witness: Témoin sous surveillance (1985). He appeared in Salvation!: Have You Said Your Prayers Today? (1987) and married his co-star, Exene Cervenka. The two had a son, Henry Mortensen. But after nearly eleven years of marriage, the couple divorced.In 1999, Viggo got a phone call about a movie he did not know anything about: The Lord of the Rings. At first, he didn't want to do it, because it would mean time away from his son. But Henry, a big fan of the books, told his father he shouldn't turn down the role. Viggo accepted the part and immediately began work on the project, which was already underway. Eventually, the success of Lord of the Rings made him a household name - a difficult consequence for the ever private and introspective Viggo.Critics have continually recognized his work in over thirty movies, including such diverse projects as Jane Campion's Portrait de femme (1996), Sean Penn's The Indian Runner (1991), Brian De Palma's L'impasse (1993), Ridley Scott's À armes égales (1997), Tony Scott's USS Alabama (1995), Andrew Davis's Meurtre parfait (1998), Ray Loriga's La pistola de mi hermano (1997), Tony Goldwyn's Le choix d'une vie (1999), and Peter Farrelly's Green Book: Sur les routes du sud (2018).Mortensen is also an accomplished poet, photographer and painter. - IMDb Mini Biography By: Grace Z and J.W. Braun

Amazon Video has the most number of Viggo Mortensen’s flixes, followed by Vudu compared to other streaming platforms. See the full graph below.

On average the IMDB score of the movies that Viggo Mortensen has worked on is 6.3.

Action,Adventure,Drama
The Lord of the Rings: The Return of the King (2003)

Gandalf and Aragorn lead the World of Men against Sauron's army to draw his gaze from Frodo and Sam as they approach Mount Doom with the One Ring.

Action,Adventure,Drama
The Lord of the Rings: The Two Towers (2002)

While Frodo and Sam edge closer to Mordor with the help of the shifty Gollum, the divided fellowship makes a stand against Sauron's new ally, Saruman, and his hordes of Isengard.

A working-class Italian-American bouncer becomes the driver of an African-American classical pianist on a tour of venues through the 1960s American South.

The Medieval and Renaissance blade, a profound and beautiful object handcrafted by master artisans of old. An object of great complexity, yet one with a singular use in mind- it is designed...

In the forests of the Pacific Northwest, a father devoted to raising his six kids with a rigorous physical and intellectual education is forced to leave his paradise and enter the world, challenging his idea of what it means to be a parent.

A Russian teenager living in London who dies during childbirth leaves clues to a midwife in her journal that could tie her child to a rape involving a violent Russian mob family.

Action,Crime,Drama
A History of Violence (2005)

A mild-mannered man becomes a local hero through an act of violence, which sets off repercussions that will shake his family to its very core in this action thriller.

Algeria, 1954. Two very different men thrown together by a world in turmoil are forced to flee across the Atlas mountains. Daru, the reclusive teacher, has to escort Mohamed, a villager accused of murder.