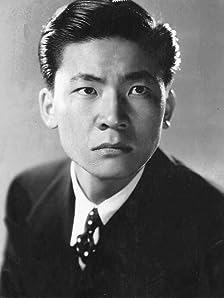 Achieving both film and TV notice during his lengthy career, this diminutive Asian-American character was born Sen Yew Cheung on October 18, 1915 in San Francisco of humble Chinese émigrés. When his mother died during the flu epidemic of 1919, his father placed Victor and his sister in a children's shelter and returned to his homeland. He arrived back in America in the mid-20s having remarried, and the children were released back to his guardianship where they began learning Chinese. To contribute to the family income, young Sen Yung was employed as a houseboy at age 11 and managed to earn his way through college at the University of California at Berkeley with an interest in animal husbandry and receiving a degree in economics.Following a move to Hollywood for some post graduate work at UCLA and USC, Victor gained an entrance into films via extra work, where he was in such roles as a peasant boy in Die gute Erde (1937), and a soldier in Mr. Moto Takes a Chance (1938), among others. During this early period he also worked as a salesman for a chemical firm. In one of Hollywood's more interesting tales of being "discovered", the story goes that Victor was on the Twentieth Century-Fox studio lot at the time trying to pitch one of his company's flame retardant compounds to industry techies when one of them suggested he check out casting. The original Charlie Chan, Warner Oland, had passed away and the series was undergoing a major casting overhaul. In the end, Sidney Toler, who was replacing the late Mr. Oland and received cast approval, chose the fledgling actor following a screen test to play his #2 son, Jimmy Chan, for the film Charlie Chan in Honolulu (1938). Victor went on to play the role for seventeen other "Charlie Chan" features. Needless, to say he quit the sales business for good.Victor enjoyed playing Jimmy, the earnest rookie detective who, to his chagrin, was always under the watchful eye of his famous father while trying to help solve murder cases. Outside the role, however, Victor (billed as Sen Yung, Victor Yung and Victor Sen Yung at different times) found the atmosphere oppressive. Usually cast in nothing-special Asian stereotypes, sometimes villainous, in war-era films, parts in such movies as Das Geheimnis von Malampur (1940) starring Bette Davis, Secret Agent of Japan (1942), Little Tokyo, U.S.A. (1942), Nacht im Hafen (1942), Abenteuer in Panama (1942), Manila Calling (1942), China (1943) and Night Plane from Chungking (1943), did little to advance his stature in Hollywood. His career was interrupted for U.S. Air Force duty as a Captain of Intelligence during WWII. His part in the Chan pictures was taken over by actor Benson Fong.Victor was able to pick up where he left off in Hollywood following the war and returned to his famous role as #2 son. The character's name, however, was eventually changed from "Jimmy" to "Tommy" after a third installment of Charlie Chan pictures were filmed with Roland Winters now the title sleuth after the passing of Mr. Toler in 1947. While Victor's workload was fairly steady, again the roles themselves were meager and hardly inspiring. Most were in "B" level crime mysteries and war pictures and many were accepted with no screen credit at all. Reduced often to playing middle-age servile roles (houseboys, laundrymen, valets, clerks, dock workers and waiters), some of his slightly more prominent roles include those in Einer weiß zuviel (1950), Strandgut (1953), Target Hong Kong (1953), and Trader Tom of the China Seas (1954). His last film appearance was in Der Mann mit Bogarts Gesicht (1980).On TV, Victor appeared in two familiar recurring roles. On the John Forsythe series Bachelor Father (1957), he showed up as "Peter Fong" on the final season of the sitcom. He played the cousin to houseboy Sammee Tong's regular character. Victor is better remembered, however, for the part of Hop Sing, the earnest, volatile cook to the Cartwright clan, provided sporadic comic relief on the long-running Bonanza (1959) western series. He also appeared in the TV pilot and in several episodes of the popular philosophical western series Kung Fu (1972), as well as popping up in dramatic episodes of Hawaiian Eye (1959), FBI (1965). and Hawaii Fünf-Null (1968). Sitcoms gave a hint of his gentle, humorous side in Here's Lucy (1968), Mini-Max oder die unglaublichen Abenteuer des Maxwell Smart (1965) and Mister Ed (1958), but there was not a single role that truly improved his standing in Hollywood.Married and divorced with one child, Victor was looking for work outside of acting by the mid-1970s. At one point he was giving cooking demonstrations in department stores. An accomplished chef who specialized in Cantonese-style cooking, he wrote the 1974 Great Wok Cookbook and dedicated the book to his father, Sen Gam Yung. Victor was working on a second cookbook when he was suddenly found dead in November of 1980 under initially "mysterious circumstances" in his modest San Fernando Valley bungalow. Following an investigation it was determined that Victor was accidentally asphyxiated in his sleep after turning on a faulty kitchen stove for heat. He was survived by his son and two grandchildren. - IMDb Mini Biography By: Gary Brumburgh / gr-home@pacbell.net

Google Play Movies has the most number of Victor Sen Yung’s flixes, followed by Apple iTunes compared to other streaming platforms. See the full graph below.

On average the IMDB score of the movies that Victor Sen Yung has worked on is 7.7.

The adventures of a Shaolin Monk as he wanders the American West armed only with his skill in Kung Fu.