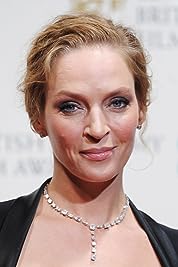 Uma Karuna Thurman was born in Boston, Massachusetts, into a highly unorthodox and internationally-minded family. She is the daughter of Nena Thurman (née Birgitte Caroline von Schlebrügge), a fashion model and socialite who now runs a mountain retreat, and of Robert Thurman (Robert Alexander Farrar Thurman), a professor and academic who is one of the nation's foremost Buddhist scholars. Uma's mother was born in Mexico City, Mexico, to a German father and a Swedish mother (who herself was of Swedish, Danish, and German descent). Uma's father, a New Yorker, has English, Scots-Irish, Scottish, and German ancestry. Uma grew up in Amherst, Massachusetts, where her father worked at Amherst College.Thurman's household was one in which the The Dalai Lama was an occasional guest; she and her siblings all have names deriving from Buddhist mythology; and Middle American behavior was little understood, much less pursued. And so it was that the young Thurman confronted childhood with an odd name and eccentric home life -- and nature seemingly conspired against her as well. She is six feet tall, and from an early age towered over everyone else in class. Her famously large feet would soon sprout to size 11 -- and even beyond that -- and although they would eventually be lovingly filmed by director Quentin Tarantino, as a child she generally wore the biggest shoes in class, which only provided another subject of ridicule. Even her long nose moved one of her mother's friends to helpfully suggest rhinoplasty -- to the ten-year-old Thurman. To make matters worse yet, the family constantly relocated, making the gangly, socially inept Thurman perpetually the new kid in class. The result was an exceptionally awkward, self-conscious, lonely and alienated childhood.Unsurprisingly, the young Thurman enjoyed making believe she was someone other than herself, and so thrived at acting in school plays -- her sole successful extracurricular activity. This interest, and her lanky frame, perfect for modeling, led the 15-year-old Thurman to New York City for high school and modeling work (including a layout in Glamour Magazine) as she sought acting roles. The roles soon came, starting with a few formulaic and forgettable Hollywood products, but immediately followed by Terry Gilliam's Münchausen báró kalandjai (1988) and Stephen Frears' Veszedelmes viszonyok (1988), both of which brought much attention to her unorthodox sensuality and performances that intriguingly combined innocence and worldliness. The weird, gangly girl became a sex symbol virtually overnight.Thurman continued to be offered good roles in Hollywood pictures into the early '90s, the least commercially successful but probably best-known of which was her smoldering, astonishingly-adult performance as June, Henry Miller's wife, in Henry és June (1990), the first movie to actually receive the dreaded NC-17 rating in the USA. After a celebrated start, Thurman's career stalled in the early '90s with movies such as the mediocre Veszett kutya és Glória (1993). Worse, her first starring role was in Néha a csajok is úgy vannak vele (1993), which had endured a tortured journey from cult-favorite book to big-budget movie, and was a critical and financial debacle. Fortunately, Uma bounced back with a brilliant performance as Mia Wallace, that most unorthodox of all gangster's molls, in Tarantino's lauded, hugely successful Ponyvaregény (1994), a role for which Thurman received an Academy Award nomination.Since then, Thurman has had periods of flirting with roles in arty independents such as Itália csókja (1995), and supporting roles in which she has lent some glamorous presence to a mixed batch of movies, such as Gyönyörű lányok (1996) and Vonzások és állatságok (1996). Thurman returned to smaller films after playing the villainess Poison Ivy in the reviled Joel Schumacher effort Batman és Robin (1997) and Emma Peel in a remake of Bosszúállók (1998). She worked with Woody Allen and Sean Penn on A világ második legjobb gitárosa (1999), and starred in Richard Linklater's drama Visszajátszás (2001) opposite Hawke. Thurman also won a Golden Globe award for her turn in the made-for-television film Pasifogó kísérletek (2002), directed by Mira Nair.A return to the mainstream spotlight came when Thurman re-teamed with Quentin Tarantino for Kill Bill (2003), a revenge flick the two had dreamed up on the set of Ponyvaregény (1994). She also turned up in the John Woo cautioner A felejtés bére (2003) that same year. The renewed attention was not altogether welcome because Thurman was dealing with the break-up of her marriage with Hawke at about this time. Thurman handled the situation with grace, however, and took her surging popularity in stride. She garnered critical acclaim for her work in Kill Bill 2. (2004) and was hailed as Tarantino's muse. Thurman reunited with Ponyvaregény (1994) dance partner John Travolta for the Szóljatok a köpcösnek! (1995) sequel Csak lazán (2005) and played Ulla in Producerek (2005).Thurman had been briefly married to Gary Oldman, from 1990 to 1992. In 1998, she married Ethan Hawke, her co-star in the offbeat futuristic thriller Gattaca (1997). The couple had two children, Levon and Maya. Hawke and Thurman filed for divorce in 2004. - IMDb Mini Biography By: Azure_Girl and Larry- 15

Amazon Video has the most number of Uma Thurman’s flixes, followed by Vudu compared to other streaming platforms. See the full graph below.

On average the IMDB score of the movies that Uma Thurman has worked on is 6.0.

A genetically inferior man assumes the identity of a superior one in order to pursue his lifelong dream of space travel.

Biography,Documentary
Without Lying Down: Frances Marion and the Power of Women in Hollywood (2000)

This documentary, first shown on the Turner Classic Movies cable channel, tells of the life and career of screenwriter Frances Marion. By the mid 1920s, she was the most respected and ...

Valjean, a former criminal, has atoned for his past and now finds himself in the midst of the French Revolution, avoiding a law-obsessed policeman hell-bent on capturing him.

Three old high school friends meet in a Michigan motel room to dissect painful memories from their past.

Natalie befriends three Tibetans sharing the same need to liberate themselves from suffering to achieve peace.