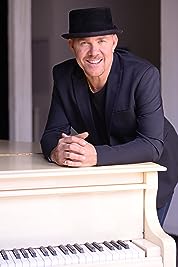 Born in Long Beach, California, to a family of musicians, it's no surprise Todd Schroeder climbed up on the piano and started lessons at only four years of age, before most children can speak full sentences. Musical influences ranging from Claude DeBussy to Ray Charles, Bob Seger, Elton John and Jerry Lee Lewis would all go on to shape Schroeder's own recognizable performance style, from his trademark Pork Pie hat to his ability to command an audience with just his skilled piano playing and on-stage charisma.When he was a teenager, he relocated to Sonora, a small country town in the foothills of Northern California's Sierra Mountains. There, he began making the rounds playing piano at local clubs and restaurants, often negotiating his own contracts and managing his career.Those restaurants and clubs have since been traded for performances at prestigious and venerable venues reaching from Carnegie Hall all the way to 1600 Pennsylvania Avenue. Schroeder has had the honor of being invited to perform with the Boston Pops, Mormon Tabernacle Choir and the Duke Ellington Orchestra, and has performed, musical directed and collaborated with a coterie of distinguished performers, including Angela Lansbury, Tom Jones, Rita Coolidge, Jason Alexander and Sam Harris; the latter for whom he's acted as musical director and collaborative partner for over 20 years, which helped him earn the coveted recognition of "Musical Director of the Year" from BroadwayWorld.com.Schroeder's masterful musical gifts are best showcased through a range of talents, including acting as Musical Director, Composer, Producer, Arranger, and Performer, all of which Schroeder seamlessly moves between with ease and precision. This is certainly most critical when taking on a supporting role for other acts' musical performances as Musical Director, not only with regard to his generous knowledge of musical theory and technique, but in his ability to adjust and perform each genre or style as well as his impeccable showmanship in continuously creating entertaining dialogue to keep the audience engaged.In addition to composing his own original music, for which he has had the opportunity to record and release six albums, Schroeder has also composed music for a variety of television series, including the American soap opera, "Guiding Light," as well as shows and television movies on Lifetime, Showtime and Cinemax. He's also appeared on TV, acting as musical director on a number of prominent television talk shows, including The Oprah Winfrey Show, The Rosie O'Donnell Show and The Late Late Show. He appeared as part-musical director, part-sidekick on a daytime talk show pilot for Buena Vista Television, engaging in banter with the host and even singing some duets.Schroeder has written a number of original musicals, including "Braveheart," "The Empower Pack," "Unbeatable" and "Longing4Love.com." And for over a decade, he served as vocal director for Disney's "Aladdin, A Musical Spectacular" and musical director for Universal Studios Japan's "Wicked" as well as a number of live performance shows at their park in Osaka.Not simply content with only furthering his career, Schroeder also seeks opportunities to give back. Each year he lends his talents as musical director to several high profile fundraisers including the Alzheimer's Association's annual celebrity benefit and star-studded musical revue, "A Night at Sardi's." He is also the founder and producer of The Todd Schroeder Young Artist Grant, a scholarship he launched in 1995 in his hometown of Sonora, to recognize and financially support graduating seniors from Sonora High School who want to pursue a career in the arts. The Young Artist Grant has given over 45 scholarships in the past 20 years to artists, dancers, actors, singers, instrumentalists and even stage managers. - IMDb Mini Biography By: Steven P. Le Vine

DIRECTV has the most number of Todd Schroeder’s flixes, followed by Amazon Prime Video compared to other streaming platforms. See the full graph below.

On average the IMDB score of the movies that Todd Schroeder has worked on is 4.9.

Angie is having no luck auditioning for movies. She thinks about going back home, but her roommate Claudia convinces her to try working at the "gentleman's club" with her in order to gain ...

Jeff meets up with a woman named Angela with whom he raised hell in high school when he attends his class reunion. She has become obsessed with 'the rush' of being spontaneous and wants ...