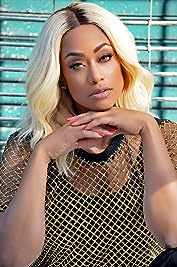 Tami Roman grew up in a middle-class, single-parent household in White Plains, NY. Since her mom worked three jobs to support the family, Tami spent many days and nights alone, undoubtedly a "latch-key" kid responsible for raising herself. It wasn't until her mother met and married Ali Akbar that her childhood changed drastically. Ali, a devout Muslim, taught Tami the value of higher education, spiritual foundation and strong family values, although it was the Muslim culture that would subconsciously teach Tami that women should be submissive and eternally supportive of their husbands, as they are the head of the household.Falling in line with the culture may have worked for Tami, but not her mother. Discovering that Ali had been unfaithful to her, Tami's mother immediately divorced him, leaving Tami broken and confused--the only man that she associated unconditional love with was snatched away and the only woman she ever loved and respected became a hardened, cynical workaholic. Tami would spend the better part of her life trying to find love lost and working hard to never become as distant as her mother.Over the next couple of years Tami and her mother would go through many trials and tribulations. They developed an incredibly close bond, so much so that they appeared to be more like sisters than mother and daughter. At one point they had to live on the streets for six months when her mother was unjustly terminated from her job, but they they stuck together, faced the toughest of storms and developed a relationship that would stand the test of time. Tami didn't attend her prom and almost didn't participate in her graduation ceremony because she couldn't afford her cap and gown. All of life's low points helped Tami and her mother to become strong, independent, knowledgeable, humble women who know, understand and appreciate the value of life.Tami had thought about a career in the modeling field and when she had a chance to get a role on MTV's hit reality series The Real World (1992) it seemed to be an answer to her prayers, and Tami's and her mother's lives suddenly took a major turn for the better.Over the course of Tami's career she has worked as a relief VJ for MTV, hosting MTV Beach House (1993), MTV Jams (1996), "Primetime MTV" and Rude Awakening (1998). Her career really ignited after her divorce in 2001. She has landed regular roles on several TV series, appeared in more than five pilots and got recurring roles on Summerland (2004), Sex, Love & Secrets (2005) and CBS' vampire hit Moonlight (2007), made guest-starring appearances on several shows, including JAG (1995), One on One (2001), The Drew Carey Show (1995), Silk Stalkings (1991) and Sabrina the Teenage Witch (1996). She has also appeared in several independent films, including MacArthur Park (2001) with Thomas Jefferson Byrd, Hair Show (2004) with Mo'Nique, The Last Stand (2013) and Something Like a Business (2010) with Kevin Hart. However, proving she is a jack of all trades, Tami has been a weather correspondent for Los Angeles' KTLA-TV news, co-air host of the revived game show Card Sharks (2001), and had a role on a "view" type talk show pilot with Telepictures.She has owned her own consignment boutique and spearheaded an interior decorating firm in partnership with her mother. Tami definitely represents a diverse view of life.+ Her diversity and outspoken nature have made her the guest speaker of choice on a plethora of topics, although she is highly sought after in particular for relationship issues, women's issues, inspirational panels, personal growth, celebrity oriented panels and hot celebrity gossip. In fact, Tami has already been a featured guest on The Oprah Winfrey Show (1986), 20/20 (1978), The Sharon Osbourne Show (2006), ESPN, E! News and several other outlets. Additionally, Tami was a featured speaker for the 2010 Circle of Sisters relationship panel with Laura Oz and radio personality Egypt.Tami can be seen as the newest cast member on VH1's hit reality show Basketball Wives (2010), which follows the lives of seven women linked to professional basketball players. "Basketball Wives" has consistently held over a million viewers since the show debuted in April 2010.Tami is never satisfied with the obvious; she recognizes that show business is a "business", and one has to capitalize when the iron is HOT!. Therefore, she has decided to take on some new challenges, one of which is writing her autobiographical memoir, entitled "The B.I.T.C.H. Chronicles". "The B.I.T.C.H. Chronicles" is an in-depth, no-holds-barred look at Tami's real world (no pun intended). She is also writing several screenplays, producing a short film and developing several reality show ideas.Tami is a mother of three teenage girls and resides in Bogota, New Jersey, with her soul mate. Always involved in her daughters' lives, she is working on securing a record deal for two daughters who have a hip-hop/r&b group and a fashion scholarship/internship for her stepdaughter. - IMDb Mini Biography By: Dean Gordon (qv's & corrections by A. Nonymous)

Amazon Video has the most number of Tami Roman’s flixes, followed by Vudu compared to other streaming platforms. See the full graph below.

On average the IMDB score of the movies that Tami Roman has worked on is 5.8.

A vampire lands work as a private investigator and falls for a mortal woman.

A true-crime podcaster tries to solve the mystery surrounding a family patriarch's death.

"Hit A Lick," tells the tragic story of Falicia Blakely, a teen mom who grows up in the fast-lane. When she becomes an exotic dancer, she attracts the attention of local pimp and predator, ...

By day, the Duncans are an upstanding family who run a thriving exotic car dealership in New York. By night, they live a dangerous secret life. When they come under siege the Duncans will have to stick together or die separately.

An ex convict on parole is set on becoming a world renowned motivational speaker.

In their struggle for survival, a group of neighbors from an affluent community turn to criminal actions.

A young adult learns that some boys in the hood are simply just goods to wealthy men in the area. It's a tale that truly questions how much you value your self-worth.

A group of women who are currently, or used to be in a relationship with a basketball player, come together on this show to tell their story.