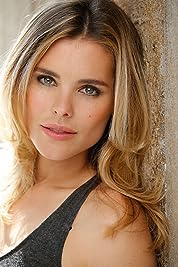 Susie Abromeit is mostly known for her breakout role in the hit Netflix/Marvel show Jessica Jones starring alongside Carrie Anne Moss and Krysten Ritter.She was a world class athlete by the age of 16, when she became a top ranked tennis player (#6 in the US), receiving a full scholarship to Duke University. She helped her team earn a number one ranking and a NCAA title during her freshman year before setting her sights on acting, music, and modeling.After she transitioned from tennis, she went on to record a song with Fat Joe with Atlantic Records, and their song "Slow Your Roll," became a summer hit playing on various radio stations in Florida. A few of her other songs that were sang, written, and produced by her, became top requested songs on radio stations across Florida.From there, she went on to grace the pages of Sports Illustrated Swimsuit edition, while simultaneously making her film debut as the lead in the Lionsgate film, Know Thy Enemy, playing a female rapper. Soon after, she began to book roles in films, such as Sydney White, Sex Drive, I Hope They Serve Beer in Hell, Setup, alongside Bruce Willis, and the blockbuster hit Battle:Los Angeles.She has also recurred on Chicago Med, Devious Maids, One Tree Hill, as well as Tyler Perry's, The Haves and Have Nots. Her guest spots include, Legends of Tomorrow, Rake, Code Black, Supernatural, NCIS, among many others.She has received a Best Actress Award from the Beverly Hills Film festival for the indie drama, Diving Normal.She is also passionate about her work as serving on the creative council for the non-partisan organization Represent.us that is supported by Jennifer Lawrence, JJ Abrams, Sia, Amy Adams, and more. She is also an ambassador for Not For Sale, an organization that helps survivors of human trafficking. - IMDb Mini Biography By: Helena Palmer

Vudu has the most number of Susie Abromeit’s flixes, followed by Amazon Video compared to other streaming platforms. See the full graph below.

On average the IMDB score of the movies that Susie Abromeit has worked on is 5.8.

Following the tragic end of her brief superhero career, Jessica Jones tries to rebuild her life as a private investigator, dealing with cases involving people with remarkable abilities in New York City.

A look at how tennis superstars Venus and Serena Williams became who they are after the coaching from their father Richard Williams.

Drama,Family,Fantasy
Much Ado About Christmas (2021)

Greta Kaine (Katrina Law) is always in search of juicy gossip. As a tabloid reporter of gossip in Los Angeles, it's her job to expose the rich and famous. So when word gets out that the ...

A Perfect Christmas follows a newlywed couple celebrating their first Christmas together.

When popular mother/daughter-bonding vlogger Stella Marshall finds herself on the outs with her own rebellious daughter Shay, she soon attracts the attention of a dangerous teen fan girl ...

After a mysterious death at the Abbey, Sister Talia finds herself caught in the center of the internal investigation. With strict orders from the newly elected Mother Superior, she must ...

The likeliest group of travelers meet in the strangest way. A few become a tight group as they fight to stay alive in a world unlike they have ever seen.