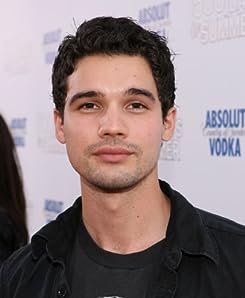 Steven Strait was born on March 23, 1986 in New York City, New York, the son of Jean (Viscione) and Richard Dyer Strait. He is of half English and half Italian descent. As a child, Steven grew up in Greenwich Village with his family. He attended Xavier High School and enrolled himself at the Stella Adler Studio of Acting to pursue his dream as an actor.But before he was recognized as an actor, Steven got early recognition as a model while he was a teenager. Steven modeled for Details, Pop, Spoon, Surface and even Vogue as a teen model. He's also worked with famous photographers such as Bruce Weber, Ellen Von Unwerth and also Herb Ritts. Working with Weber got Steven featured in his 2001 book, "All-American: Short Stories".Acting didn't come naturally for Steven. Even though most actors out there knew that they wanted to act as a kid, Steven actually didn't enjoy acting. He first learned about acting when he was with a family member at the age of eleven. Steven's parents thought acting could very well be Steven's career and they decided to enroll him in classes at the Village Community School.Not too long later, Steven caught the acting bug. He eventually got the chance to perform live and that was when Steven thought he could actually make something he enjoyed a lifetime career. This passion eventually brought him to work at the Stella Adler Acting Studio and the Black Nexus Acting Studio, which are both situated in New York City.When he turned 18, Steven graduated from Xavier High School and he moved to California with hopes of pursuing a real career in acting. It was only a matter of time. When Steven went to his first audition, he received an acting job which was a role in the movie, Sky High (2005). "Sky High" marked Steven's acting debut in the movie industry.Steven then signed on to do the movie, Undiscovered (2005), about a group of teenagers who aspire to be famous. "Undiscovered" wasn't a big hit at the box-office but critics enjoyed watching Steven playing the role of "Luke Falcon". The movie also starred another movie newcomer, songstress Ashlee Simpson.The time finally came when Steven was asked to star in the horror movie, The Covenant (2006), playing the role of "Caleb Danvers", a prep school student who comes from a wealthy family. In the cast, Steven worked with actors Taylor Kitsch, Toby Hemingway, Sebastian Stan, and Chace Crawford. The Covenant (2006) was a big hit in certain parts of the globe and fans got to learn more about Steven's acting talent. The critics were also impressed with Steven.The year 2008 is probably Steven's busiest year since he started acting. Steven signed on to do a couple of movies in the year 2007 and promotion work for his movies will start from March 2008, onwards. Critics are also already excited to see Steven's work in the movie, 10,000 BC (2008), also starring Camilla Belle. He appeared in the MTV Production movie, Stop-Loss (2008), as "Michael Colson". Steven recently completed working on a movie named City Island (2009) in New York.Aside from participating in fashion and acting, Steven is also known to most people as a singer. Steven has performed a few songs in the soundtrack album of Sky High (2005) and Undiscovered (2005).Steven, so far, has proved that he is a multi-tasking star in the business. Even though he may seem to be famous, Steven claims that he tries to keep himself grounded from all the fame. At 22, this star has already impressed most entertainment critics, whether in modeling, acting or singing. - IMDb Mini Biography By: Anastasia Andrew Veno

Amazon Video has the most number of Steven Strait’s flixes, followed by Google Play Movies compared to other streaming platforms. See the full graph below.

On average the IMDB score of the movies that Steven Strait has worked on is 6.6.

A police detective in the asteroid belt, the first officer of an interplanetary ice freighter, and an earth-bound United Nations executive slowly discover a vast conspiracy that threatens the Earth's rebellious colony on the asteroid belt.

Centers on Miami mobsters and other characters from Miami Beach in the late 1950s.

Prison guard Vince tells Molly from acting class, that one inmate is his 24 y.o. love child. Vince takes him home to stay with his family - straight A son with fat girl fetish, college dropout/stripper daughter and cute wife.

Terminally ill Anna returns to Oregon to reconnect with her estranged brother while simultaneously making the heart-wrenching choice to end her life putting to use the Death with Dignity Act.

Comedy
Sleeping with the Fishes (2013)

A woman's journey of self-discovery and the dynamics of her zany family.

When two bus crash survivors awake to discover that they are the only people left in their town, they work together to unravel the truth behind the strange events.

An idealistic, attractive young couple acquires a stunning, life-like robot for guilt-free help; but, as the three grow closer, their perception of humanity will be altered forever.

Four young men who belong to a New England supernatural legacy are forced to battle a fifth power long thought to have died out. Meanwhile, jealousy and suspicion threaten to tear them apart.