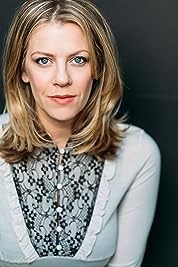 Stefanie Johnson is an American actress born in Bellingham, WA on July 4, 1974. Her love of performing sparked at an early age. Singing and dancing from age 5, she would entertain her family and friends at parties, direct short plays and take any opportunity to shine in a talent show. At age 10, Stefanie booked her first commercial in Seattle, after begging her Mom, Lindy Young to take her to her first ever professional audition. She continued to work as a young model in local fashion shows and was cast in productions at The Bellingham Theater Guild. She attended Bellingham High School, where she played basketball, was a cheerleader, sang in the choir, performed in many plays, and graduated in 1992.As a young adult in the early 90's, Stefanie moved to Seattle, WA and took acting classes at Northwest Actors Studio (which happened to be located in the same building as her Grandmother Jackie Watson's art studio). She was cast as a lead in an independent feature film by Sally Grace, called Strange Attractors. Although they finished principal photography, the film was never released. She then shifted her focus to academics and attended Shoreline Community College, transferring to University of Washington with honors in 1996. At the urge of many to get a "real job/have a back-up plan," Stefanie chose a Psychology major and hoped to become a child and family therapist. It didn't take long for her to realize that she would rather be in rehearsals for a show than in a small group study for her clinical research class. So she switched majors and dedicated her last year of college to the esteemed Drama Program, where she was fortunate to work with Robyn Hunt and Steven Pearson, learning the rigorous physical Japanese technique of the Suzuki Method. After graduating with honors from UW in 1998, Stefanie stayed in Seattle and worked with Pacific Performance Project, learning more about movement, dance, clowning, and physical comedy.At the start of 2000, a fearless 25 year old Stefanie packed her bags for New York City. She took several intensive workshops; studying Meisner Technique with Bill Esper at William Esper Studios, learning Viewpoints at SITI Company with Broadway Actor Tom Nellis, and continuing workshops with Robyn Hunt and Steven Pearson at Marymount Manhattan College. She performed in several off-Broadway showcases produced by David Spera, and was cast in plays in the New York International Fringe Festival. Commercially, Stefanie was represented by Ann Wright Representatives, and she booked a national Domino's commercial and was cast in a commercial campaign in Tokyo for AEON. Toward the end of her ten years in NYC, Stefanie worked with two productions of Cirque This! at Triskelion Arts in Brooklyn, reinvigorating her love of physical comedy and avant-garde ensemble performance.Stefanie moved to Los Angeles in December 2009 to focus her work on Film and Television. She hit the ground running, literally, taking buses and bumming rides to any audition she could find. She worked on student films, music videos, industrials and began classes at John Rosenfeld Studios. She took a hiatus from her career in 2011, when she gave birth to her son Jackson. She focused on raising her son, writing and creating her own work. Stefanie then booked a job with Veteran's Affairs, playing the role of a Veteran with bi-polar disorder on two videos for the Behavioral Family Therapy program with the National Education Director, Dr. Noosha Niv. Stefanie continued working with the VA in a study, playing the wife of a Veteran in over 100 mock therapy sessions.In 2016, Stefanie helped produce and acted in Actor Salon's 5th annual Hollywood Showcase at Zephyr Theater in West Hollywood. This networking opportunity led her to working in television on Investigation Discovery and Lifetime shows. She recently tackled a challenging role as an I.C.E. agent in the film Here I Am by Kevin Desmond, produced by RAI Pictures. - IMDb Mini Biography By: Stefanie Johnson

Netflix has the most number of Stefanie Johnson’s flixes compared to other streaming platforms. See the full graph below.

On average the IMDB score of the movies that Stefanie Johnson has worked on is 8.9.