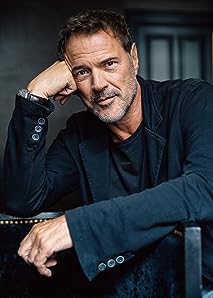 On stage, television or the movie theatre screen Sebastian Koch is undeniably one of Germany s most multi-faceted and successful actors. Born in Karlsruhe, Germany, May 31, 1962, he spent his childhood and youth in Stuttgart, southwestern Germany. He planned to become a musician, but in the late seventies a Stuttgart theater production by director Claus Peymann, inspired him to change his professional direction and choose a career as an actor. He graduated in 1985 from the renowned Otto Falckenberg School of Acting in Munich. Initial career performances at Munich´s Theater der Jugend were followed by roles including Schiller s "Die Raeuber", Goethe s "Iphigenie", and "Dirty Dishes" from Nick Whitby in engagements at the Staedtischen Buehnen Ulm, the Staatstheater Darmstadt and the Staatlichen Buehnen Berlin. In 1986 he commenced his television career debuting on the side of Commissioner Helmut Fischer in the famous long-running German television Sunday night crime series "Tatort"-- "Die Macht des Schicksals." Innumerable crime stories and thrillers followed but it was in 1997 when director Heinrich Breloer cast Koch as Andreas Baader in the highly-acclaimed movie-of-the week two-parter "Todesspiel" which overnight changed his career. Five years later in 2002 Sebastian Koch achieved a feat not achieved in over 30 years of German television, he was awarded the coveted Grimme Prize for the leading roles in two television films, "Der Tanz mit dem Teufel - Die Entfuehrung des Richard Oetker", the story of the abduction of the heir to the Oetker fortune, as well as for his role in the three-part historical family drama "The Manns". The production "The Manns" was awarded Germany's esteemed honor as the "Television Event of the Year 2002". Koch received additional accolades for his role as Klaus Mann, including the Bavarian Television Prize. His international breakthrough came with the historical mini-series "Napoleon," alongside prominent colleagues including Gerard Depardieu, John Malkovich and Isabella Rossellini, and his role as Cathereine Deneuve's young lover, Rodolphe Loewenstein in "MARIE AND FREUD". Koch' s continued choice of roles in his career have provided an extremely intense examination of many personalities and themes pertaining to German history. Beginning theatrically in Constantin Costa-Gavras adaptation of Rolf Hochhuth's "AMEN" released in 2002, and then in successive German television events including the 2001 production of "The Tunnel", a two-part movie-of-the-week from Roland Suso Richter about the underground tunnel built from west to east Berlin which succeeded in enabling 100 people to flee the GDR; followed in 2003 with director Peter Keglevic's historical drama "Zwei Tage Hoffnung" about the infamous strike in the former GDR on June 17, 1953; and, the next year, in "Operation Valkryrie", the spectacular docu-drama from Jo Baier, awarded the German Television Prize, about the aristocratic soldier Clemens von Stauffenberg's perfect plot in 1944 to murder Hitler by smuggling a bomb into Hitler's bunker. In 2005 Koch collaborated for the third time with director Heinrich Breloer in "Speer and Hitler", the story of Hitler and his architect Albert Speer, garnering Koch both the German Television Prize and Bavarian Television Prize for Best Actor. Sebastian Koch was awarded the Bambi Award for Best Male German Actor 2006. Sebastian Koch is drawn to complex, flawed characters with rough edges. A particular loneliness and/or reclusiveness surrounds Koch's characters, even a certain sadness through which he finds the energy and tension for his roles. In 2006 his stunning performance as GDR dramatist/playwright Georg Dreymann in Florian Henkel von Donnermarck's Oscar-winning theatrical success, the Stasi-drama, "THE LIVES OF OTHERS" earned him the 2007 Italian Foreign Press Award, the Globo d'Oro for Best European Actor. In Paul Verhoeven s film "BLACK BOOK", which celebrated in 2006 premieres in Venice and Toronto and was nominated from the Netherlands for the 2007 Academy Award for Best Foreign Language Film, Koch played the lead role as a Nazi officer in German-occupied Holland who falls in love with a Jewish Resistance Fighter (Carice van Houten). Under the direction of Hermine Huntgeburth ("The White Massai") alongside Julia Jentsch, Koch was most recently shooting EFFIE in the role of Geert von Instetten in the novel adaptation of "Effi Briest" by Theodor Fontane. Following the productions in Winter 2007/2008 of "Gegen den Strom" (Against the Current) and "The Interrogation of Harry Wind," Koch will travel to Canada for the lead role in the international coproduction of Jack London s classic "The Sea Wolf." The English language TV production, written by Nigel Williams ("Elizabeth I.") is being directed by Brit Mike Barker. Koch s German and international theatrical successes include the 2003 remake of Erich Kaestner s children s classic "DAS FLIEGENDE KLASSENZIMMER" from director Tomy Wiegand and "GLOOMY SUNDAY" from Rolf Schuebel (1999). In Spring 2007 Warner Brothers Germany released the family comedy sequel "RENNSCHWEIN RUDI RUESSEL 2" from Peter Timm. Sebastian Koch is alongside his theatrical and television activity a sought after reader for literary and musical audio books and the live performances of these productions. He returned to the theatre stage in 2006 after a long absence, performing the role of Lord Goring in Oscar Wildes "An Ideal Husband" under the direction of Armin Holz, a celebrated critical and audience success at the distinguished Schauspielhaus Bochum.Sebastian Koch makes his home in Berlin and has a daughter. - IMDb Mini Biography By: Anke Zindler, www.just-publicity.com

Amazon Video has the most number of Sebastian Koch’s flixes, followed by Apple iTunes compared to other streaming platforms. See the full graph below.

On average the IMDB score of the movies that Sebastian Koch has worked on is 6.5.

Drama,Mystery,Thriller
The Lives of Others (2006)

In 1984 East Berlin, an agent of the secret police, conducting surveillance on a writer and his lover, finds himself becoming increasingly absorbed by their lives.

German artist Kurt Barnert has escaped East Germany and now lives in West Germany, but is tormented by his childhood under the Nazis and the DDR-regime.

In the Nazi-occupied Netherlands during World War II, a Jewish singer infiltrates the regional Gestapo headquarters for the Dutch resistance.

In the former Czechoslovakia, 1950s, police captain Hakl investigates a jewelery robbery. An opened safe deposit leads to a known burglar. What seems an easy case soon starts to tangle. ...

Based on a true story, KALINKA is about the struggle of Andre Bamberski to bring justice to his daughter Kalinka who died in disturbing circumstances. After 27 years of investigation to ...

About a series of unsolved disappearances on the Galapagos Island of Floreana in the 1930s.

In 1944, in fear of a complete German defeat in the World War II, a group of high command officers plot an attempt against Hitler, and one of the leaders of the conspiracy, Stauffenberg (...

Beth, a bookish teenager, befriends Emilia, an aspiring novelist who has just arrived in town. Emilia soon begins an affair with Beth's father that threatens to have devastating consequences.