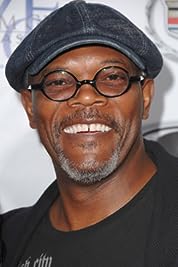 Samuel L. Jackson is an American producer and highly prolific actor, having appeared in over 100 films, including Die Hard - Az élet mindig drága (1995), A sebezhetetlen (2000), Shaft (2000), A hetedik mennyország (2001), A lánc (2006), Kígyók a fedélzeten (2006), and the Star Wars prequel trilogy (1999-2005), as well as the Marvel Cinematic Universe.Samuel Leroy Jackson was born in Washington, D.C., to Elizabeth (Montgomery) and Roy Henry Jackson. He was raised by his mother, a factory worker, and his grandparents. At Morehouse College, Jackson was active in the black student movement. In the seventies, he joined the Negro Ensemble Company (together with Morgan Freeman). In the eighties, he became well-known after three movies made by Spike Lee: Szemet szemért (1989), Mo' Better Blues (1990) and Dzsungelláz (1991). He achieved prominence and critical acclaim in the early 1990s with films such as Férfias játékok (1992), Amos és Andrew bilincsben (1993), Tiszta románc (1993), Jurassic Park (1993), and his collaborations with director Quentin Tarantino, including Ponyvaregény (1994), Jackie Brown (1997), and later Django elszabadul (2012). Going from supporting player to leading man, his performance in Ponyvaregény (1994) gave him an Oscar nomination for his character Jules Winnfield, and he received a Silver Berlin Bear for his part as Ordell Robbi in Jackie Brown (1997). Jackson usually played bad guys and drug addicts before becoming an action hero, co-starring with Bruce Willis in Die Hard - Az élet mindig drága (1995) and Geena Davis in Utánunk a tűzözön (1996).With Jackson's permission, his likeness was used for the Ultimate version of the Marvel Comics character, Nick Fury. He later did a cameo as the character in a post-credits scene from A vasember (2008), and went on to sign a nine-film commitment to reprise this role in future films, including major roles in Vasember 2 (2010), Bosszúállók (2012), Amerika kapitány: A tél katonája (2014) and Bosszúállók: Ultron kora (2015) and minor roles in Thor (2011) and Amerika kapitány: Az első bosszúálló (2011). He has also portrayed the character in the second and final episodes of the first season of the TV show, Marvel's A SHIELD ügynökei (2013). He has provided his voice to several animated films, television series and video games, including the roles of Lucius Best / Frozone in Pixar's film A hihetetlen család (2004), Mace Windu in Star Wars: A klónok háborúja (2008), Afro Samurai in the anime television series Afro szamuráj (2007), and Frank Tenpenny in the video game Grand Theft Auto: San Andreas (2004). - IMDb Mini Biography By: wladimir van Heemst and Pedro Borges

Amazon Video has the most number of Samuel L. Jackson’s flixes, followed by Google Play Movies compared to other streaming platforms. See the full graph below.

On average the IMDB score of the movies that Samuel L. Jackson has worked on is 6.5.

A survey of the musical form's history and major talents.

Biography,Documentary,Sport
Unforgivable Blackness: The Rise and Fall of Jack Johnson (2004)

A family of undercover superheroes, while trying to live the quiet suburban life, are forced into action to save the world.

Documentary,History
I Am Not Your Negro (2016)

Writer James Baldwin tells the story of race in modern America with his unfinished novel, Remember This House.

In the dead of a Wyoming winter, a bounty hunter and his prisoner find shelter in a cabin currently inhabited by a collection of nefarious characters.

As Steve Rogers struggles to embrace his role in the modern world, he teams up with a fellow Avenger and S.H.I.E.L.D agent, Black Widow, to battle a new threat from history: an assassin known as the Winter Soldier.

A spy organisation recruits a promising street kid into the agency's training program, while a global threat emerges from a twisted tech genius.