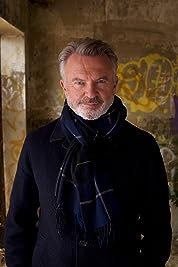 Sam Neill was born in Omagh, Co. Tyrone, Northern Ireland, to army parents, an English-born mother, Priscilla Beatrice (Ingham), and a New Zealand-born father, Dermot Neill. His family moved to the South Island of New Zealand in 1954. He went to boarding schools and then attended the universities at Canterbury and Victoria. He has a BA in English Literature. Following his graduation, he worked with the New Zealand Players and other theater groups. He also was a film director, editor and scriptwriter for the New Zealand National Film Unit for 6 years.Sam Neill is internationally recognised for his contribution to film and television. He is well known for his roles in Steven Spielberg's Jurassic Park (1993) and Jane Campion's Academy Award Winning film The Piano (1993). Other film roles include The Daughter (2015), Backtrack (2015) opposite Adrien Brody, MindGamers (2015), United Passions (2014), A Long Way Down (2014), Escape Plan (2013), The Hunter (2011) with Willem Dafoe, Daybreakers (2009), Legend of the Guardians: The Owls of Ga'Hoole (2010), Little Fish (2005) opposite Cate Blanchett, Skin (2008), Dean Spanley (2008), Wimbledon (2004), Yes (2004), Perfect Strangers (2003), Dirty Deeds (2002), The Zookeeper (2001), Bicentennial Man (1999) opposite Robin Williams, The Horse Whisperer (1998) alongside Kristin Scott Thomas, Sleeping Dogs (1977), and My Brilliant Career (1979).He received Emmy and Golden Globe nominations for the NBC miniseries Merlin (1998). He also received a Golden Globe nomination for One Against the Wind (1991), and for Reilly: Ace of Spies (1983). The British Academy of Film and Television honoured Sam's work in Reilly by naming him Best Actor. Sam received an AFI Award for Best Actor for his role in Jessica (2004).Other television includes House of Hancock (2015), Rake (2010), Doctor Zhivago (2002), To the Ends of the Earth (2005), The Tudors (2007) with Jonathan Rhys Meyers, Crusoe (2008), Alcatraz (2012) and recently in Old School (2014) opposite Bryan Brown, Peaky Blinders (2013) alongside Cillian Murphy and The Dovekeepers (2015) for CBS Studios. - IMDb Mini Biography By: Shanahan Management

Amazon Video has the most number of Sam Neill’s flixes, followed by Vudu compared to other streaming platforms. See the full graph below.

On average the IMDB score of the movies that Sam Neill has worked on is 6.6.

Sam Neill narates an in-depth exploration of New Zealand and its amazing and obscure wildlife.

Explore the wonders of our universe with Sam Neill.

A pragmatic paleontologist visiting an almost complete theme park is tasked with protecting a couple of kids after a power failure causes the park's cloned dinosaurs to run loose.

A dramatization of the missions and adventures of the greatest spy in British history.

Crime,Drama,Mystery
And Then There Were None (2015)

Ten strangers are invited to an island by a mysterious host, and start to get killed one by one. Could one of them be the killer?

Adventure,Comedy,Drama
Hunt for the Wilderpeople (2016)

A national manhunt is ordered for a rebellious kid and his foster uncle who go missing in the wild New Zealand bush.

Journalist David Farrier goes on a quest to small town New Zealand to find the average Kiwi. What he finds in this mockumentary series, is a lovable bunch of people who are anything but ...

Action,Adventure,Thriller
The Hunt for Red October (1990)

In November 1984, the Soviet Union's best submarine Captain in their newest sub violates orders and heads for the U.S. Is he trying to defect or to start a war?