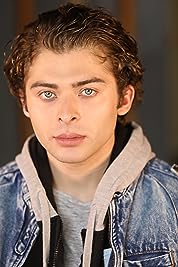 Ryan Ochoa was born in San Diego, CA. He has always loved to entertain family and friends since a toddler, imitating WWE Superstars including Dwayne Johnson, which to this day is still one of his favorite actors and biggest inspirations.He was discovered at 5 years old by a talent manager, running around at his dad's furniture store when she said he should be in commercials. He booked his first ever audition for a "Greyhound" bus commercial when he was just 7 and his first national "Dairy Queen" commercial at 8 years old. He caught the acting bug and went on to do more national commercials, one in particular was for "JCPenny," which his 2 younger brothers Robert Ochoa and Raymond Ochoa were in the spot with him.He began to expand his career by booking his first theatrical role in a short film, which led to a couple indie features and went on to book his first feature film The Perfect Game (2009) opposite Clifton Collins Jr., Cheech Marin, and Academy Award Winner Louis Gossett Jr.. The film was a true story about the 1957 Mexican Little League team from Monterrey, who were the first non-U.S team to win the Little League World Series. Ryan portrayed the catcher Norberto Villarreal, and to this day, he remains good friends with most of his cast.His big break came in 2008 when he was cast in the motion capture film A Christmas Carol (2009) written and directed by Academy Award winning director Robert Zemeckis and starring Jim Carrey, Gary Oldman, and many other big stars. Ryan had multiple credited roles in the film including the voice of Tiny Tim. After production ended, Ryan ended up working for Mr. Zemeckis on 2 more movies he was producing, "Calling All Robots" and Mars Needs Moms (2011).He then was cast as Chuck Chambers in a re-curring role on Nickelodeon's hit show iCarly (2007) as the nemesis to Spencer Jerry Trainor. A year later Disney came calling...They cast him as a series regular on Disney XD's Pair of Kings (2010). Ryan played Lanny, the disgruntled, bitter cousin to the twin kings, where his main goal was to steal the throne. He was on the show for 3 seasons where he appeared in all episodes produced.His first leading role in a film was with Universal/Disney in the movie Mostly Ghostly: Have You Met My Ghoulfriend? (2014) where he played Max Doyle opposite Bella Thorne.In 2012, Ryan formed a music "hip-hop-hype" group with his 3 brothers Rick Ochoa, Robert Ochoa, and Raymond Ochoa called the "Ochoa Boyz." They have toured the U.S. performing at hundreds of concerts and private events. Their music can also be heard in several of the movies Ryan and Raymond have starred in. They continue to write and co-produce their own music and music videos, which they produce, edit, and now direct together, with Ryan's own production company, Triple 'R' Productions. Ryan shows daily that he not only loves being in front of the camera, but behind the camera too.In 2018, Ryan starred opposite Emmy and Tony award winner Hal Linden in The Samuel Project (2018) directed and written by Marc Fusco. Ochoa plays Eli, an aspiring artist who builds a relationship with his grandfather Samuel, (Hal Linden) by making Samuel the subject of his art project. This earned both Ochoa and Mr. Linden "BEST ACTOR" nominations at the San Diego Film Awards, where their film also won "BEST NARRATIVE FEATURE FILM" and "BEST DIRECTOR," respectively.Following "The Samuel Project," Ochoa suited up in U.S. military attire in the Netflix documentary series, Medal of Honor (2018) marking this as his fourth project with Robert Zemeckis and his team, whom produced alongside Academy Award winner James Moll.Within one week of wrapping "Medal of Honor," Ochoa was off to Sedona, Arizona where he would portray the neighborhood street punk skater, Wayne, in the thriller Room for Rent (2019) starring Lin Shaye.Ryan credits Casey Nicholas Price, the 1st Assistant Director on the film, for referring him to the director. Ochoa worked with Casey earlier that year on "The Samuel Project," where he built a lifelong friendship with Casey and many of the cast and crew.Next up, Ochoa is not only producing films but now directing and editing short films, as well as music videos for other solo artists.Ryan's official debut album "R-TYPE" with the "Ochoa Boyz" was released at the top of 2020. Ryan, his brothers, and their standalone producer were the only writers on the album, being they are the only writers listed on all 17 tracks. Each brother feature on their own individual track as well, showcasing their musical talents in three different style records. Ryan quotes, "This is 'R-TYPE' of music, 'R-TYPE' of genre, and 'R-TYPE' of stories."Ochoa still feels like his journey is just beginning though, and spends his time studying his craft, creating new content, expanding his business mindset, accomplishing fitness goals, all while focusing to fulfill his quote, "If I can inspire just ONE person, then I have accomplished my purpose!"Whether it's with a camera or on stage with a mic, Ryan was born to entertain and inspire others along the way, making sure the world will always "DREAM, WISH, BELIEVE." - IMDb Mini Biography By: Anonymous

Apple iTunes has the most number of Ryan Ochoa’s flixes, followed by Amazon Video compared to other streaming platforms. See the full graph below.

On average the IMDB score of the movies that Ryan Ochoa has worked on is 6.7.

Eli, an outcast teen, connects with his isolated grandfather Samuel for the first time, and uncovers his surprising past, when he makes his grandpa the subject of an animated art project for school.

Teenage twins from Chicago discover they are heirs to the throne of an island nation.

Lonely widow Joyce rents out a room in her house and becomes dangerously obsessed with one of her guests.