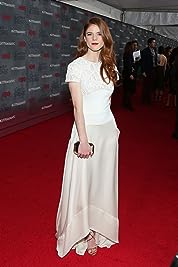 Rose Leslie is a Scottish actress. Her leading on screen debut was at age 21 in the television film New Town (2009). She is famous for playing Ygritte in the HBO fantasy series Game of Thrones (2011). Leslie also appeared in the films Voor ik doodga (2012) and The Last Witch Hunter (2015).Leslie was born Rose Eleanor Arbuthnot-Leslie in Aberdeen, Scotland, near Lickleyhead Castle, where her family has lived for more than 500 years. Rose is the daughter of Candida Mary Sibyl (Weld) and Sebastian Arbuthnot-Leslie, who is the Aberdeenshire Chieftain of Clan Leslie. She is the middle of five children, and went to the local primary school in Rayne, before going to Millfield, a co-ed public school in England. It was at Millfield that Rose really cultivated her love for acting, as the school had an excellent drama department. After five years at Millfield, Rose went on to the London Academy of Music and Dramatic Art (LAMDA) to earn a bachelor's degree with honors in 2008.Rose's first acting job was in a television documentary series, called Banged Up Abroad (2007), in 2008. In 2009, she appeared in the made-for-TV film, New Town (2009), in which she received a Scottish BAFTA Award for Best Acting Performance - New Talent Award. In 2010, Rose appeared in the British TV Series, Downton Abbey (2010), as "Gwen Dawson", for 7 episodes. Later that year, she appeared in the play, "Bedlam", at the Globe Theatre in London. In 2011, Rose appeared in the British drama television series, Case Histories (2011), as "Laura Wyre", for 2 episodes. In 2012, Rose played "Lena Holgate" in the episode, Vera: The Ghost Position (2012), in the British detective television series, Vera (2011). Later that same year, Rose would make her iconic appearance in the 2nd season of the HBO epic fantasy series, Game of Thrones (2011), opposite Kit Harington as the wildling "Ygritte". - IMDb Mini Biography By: Robert Ferguson and Pedro Borges

Amazon Video has the most number of Rose Leslie’s flixes, followed by Google Play Movies compared to other streaming platforms. See the full graph below.

On average the IMDB score of the movies that Rose Leslie has worked on is 6.5.

When Diane Lockhart's life savings are lost, she must start from scratch at a new firm.

Two half-hour animated films based on the much-loved rhymes written by Roald Dahl and illustrated by Quentin Blake.

Crime,Drama,Mystery
Death on the Nile (2022)

While on vacation on the Nile, Hercule Poirot must investigate the murder of a young heiress.

A story about love and loss. And maybe one day - love again.

The last witch hunter is all that stands between humanity and the combined forces of the most horrifying witches in history.

An insight into what happened on the night of 2 September 1666, the Great fire of London.

A corporate risk-management consultant must decide whether or not to terminate an artificially created humanoid being.

A newlywed couple finds their lake-country honeymoon descend into chaos after Paul finds Bea wandering and disoriented in the middle of the night.