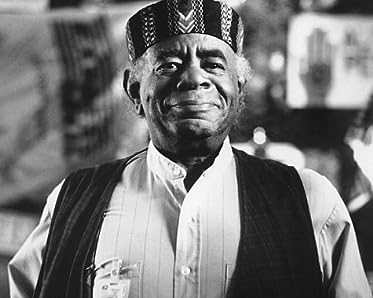 He was a master class in cerebral eloquence and audience command...and although his dominant playing card in the realm of acting was quite serious and stately, nobody cut a more delightfully dry edge in sitcoms than this gentleman, whose calm yet blistering put-downs often eluded his lesser victims.Acting titan Roscoe Lee Browne was born to a Baptist minister and his wife on May 2, 1922, in Woodbury, New Jersey. He attended Lincoln University, an historically black university in Pennsylvania until 1942, when he enlisted in the U.S. Army during World War II, where he served in Italy with the Negro 92nd Infantry Division and organized the Division's track and field team. He graduated from Lincoln University in 1946, and studied French through Middlebury College's summer language program. He received his master's degree from Columbia University, then subsequently returned to Lincoln and taught French and comparative literature, seemingly destined to settle in completely until he heard a different calling.Roscoe relished his first taste of adulation and admiration as a track star, competing internationally and winning the world championship in the 800-yard dash in 1951. He parlayed that attention into a job as a sales representative for a wine and liquor importer. In 1956, he abruptly decided to become an actor. And he did. With no training but a shrewd, innate sense of self, he boldly auditioned for, and won, the role of the Soothsayer in "Julius Caesar" the very next day at the newly-formed New York Shakespeare Festival. He never looked back and went on to perform with the company in productions of "The Taming of the Shrew", "Titus Andronicus", "Othello", "King Lear" (as the Fool), and "Troilus and Cressida".Blessed with rich, mellifluous tones and an imposing, cultured air, Roscoe became a rare African-American fixture on the traditionally white classical stage. In 1961 he appeared notably with James Earl Jones in the original off-Broadway cast of Jean Genet's landmark play "The Blacks". Awards soon came his way -- the first in the form of an Obie only a few years later for his portrayal of a rebellious slave in "The Old Glory". Additionally, he received the Los Angeles Drama Critic's Circle Award for both "The Dream on Monkey Mountain" (1970) and "Joe Turner's Come and Gone" (1989). Roscoe found less successful ventures on 1960s Broadway, taking his first curtain call in "A Cool World" in 1960, which folded the next day. He graced a number of other short runs including "General Seegar" (1962), "Tiger, Tiger Burning Bright" (1962), "The Ballad of the Sade Cafe" (1964), "Danton's Death" (1965), and "A Hand Is on the Gate: An Evening of Negro Poetry and Folk Music" (1966), which he also wrote and directed. He did not return to Broadway until 1983 with the role of the singing Rev. J.D. Montgomery in Tommy Tune's smash musical "My One and Only" in which his number "Kicking the Clouds Away" proved to be one of many highlights. Roscoe returned only once more to Broadway, earning acclaim and a Tony nomination for his supporting performance in August Wilson's "Two Trains Running" (1992).Although he made an isolated debut with Connection (1961), he wouldn't appear regularly in films until the end of the decade with prominent parts in the Elizabeth Taylor/Richard Burton film, Les comédiens (1967), Jules Dassin's Point noir (1968), Hitchcock's L'étau (1969) and, his most notable, On n'achète pas le silence (1970). Thereafter, he complimented a host of features, both comedic and dramatic, including Super Fly (1972) (and its sequel), Uptown Saturday Night (1974), L'âge de cristal (1976), L'affaire Chelsea Deardon (1986), Les mambo kings (1992) and Escroc malgré lui (1996)Elsewhere, Roscoe's disdainful demeanor courted applause on all the top 70s sitcoms including "All in the Family", "Maude," "Sanford and Son", "Good Times" and "Barney Miller" (Emmy-nominated), and he played the splendidly sardonic role of Saunders, the Tate household butler, after replacing Robert Guillaume's popular "Benson" character on Soap (1977). In 1986 he won an Emmy Award for his guest appearance on Cosby Show (1984). His trademark baritone lent authority and distinction to a number of documentaries, live-action fare, and animated films, as well as the spoken-word arena, with such symphony orchestras as the Boston Pops and the Los Angeles Philharmonic to his credit. A preeminent recitalist, he was known for committing hundreds of poems to memory. For many years he and actor Anthony Zerbe toured the U.S. with their presentation of "Behind the Broken Words", an evening of poetry and dramatic readings.At the time of his death of cancer on April 11, 2007, the never-married octogenarian was still omnipresent, more heard than seen perhaps. Among his last works was his narrations of a Garfield film feature and the most recent movie spoof Big Movie (2007). - IMDb Mini Biography By: Gary Brumburgh / gr-home@pacbell.net

Amazon Video has the most number of Roscoe Lee Browne’s flixes, followed by Vudu compared to other streaming platforms. See the full graph below.

On average the IMDB score of the movies that Roscoe Lee Browne has worked on is 6.8.

A present-day adaptation of Charles Dickens' "A Christmas Carol".

A young man with spider-like abilities fights crime as a superhero in New York City while trying to have a normal personal life.

A Disney animated version of "Treasure Island". The only difference is that this movie is set in outer space with alien worlds and other galactic wonders.

An idyllic science fiction future has one major drawback: life must end at the age of thirty.

Crime,Drama,Romance
The Liberation of L.B. Jones (1970)

A Southern lawyer uncovers the truth about a slain undertaker.