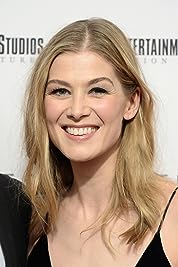 Born on January 27, 1979 in London, England, actress Rosamund Mary Elizabeth Pike is the only child of a classical violinist mother, Caroline (Friend), and an opera singer father, Julian Pike. Due to her parents' work, she spent her early childhood traveling around Europe. Pike attended Badminton School in Bristol, England and began acting at the National Youth Theatre. While appearing in a National Youth Theatre production of "Romeo and Juliet", she was first spotted and signed by an agent, although she continued her education at Wadham College, Oxford, where she read English Literature, eventually graduating with an upper second class honors degree.Pike appeared in a number of UK television series, including Wives and Daughters (1999), before scoring an auspicious feature film debut as the glacial beauty "Miranda Frost" in the James Bond film, Die Another Day (2002); when the film was released, she was only 23. Though her debut was a big-budget action film, the film work that followed was primarily in smaller, independent films, including Promised Land (2004), The Libertine (2004), (for which she won the Best Supporting Actress award at The British Independent Film Awards), and Pride & Prejudice (2005), as one of the Bennet daughters. A brief foray into Hollywood film followed with the action flick, Doom (2005), and the thriller, Fracture (2007), but she returned to smaller films with exceptional performances in three films: An Education (2009), Made in Dagenham (2010), and the lead opposite Paul Giamatti in Barney's Version (2010).As she continued her stage work in England, Pike appeared in the spy spoof, Johnny English Reborn (2011), and inhabited the role of "Andromeda" in the sci-fi epic, Wrath of the Titans (2012). She returned to action films with the female lead opposite Tom Cruise in Jack Reacher (2012).Pike entered into a relationship with a mathematical researcher named Robie Uniacke in 2009. She gave birth to their first son, named Solo, in May 2012. She returned to acting and landed the coveted title role in Gone Girl (2014). The film became a critical and box-office hit, with Pike earning the film's sole Academy Award nomination as Best Actress. She also earned nominations as Best Actress from Screen Actor's Guild, Golden Globes, and BAFTA. She gave birth to her second son with Uniacke in December 2014. - IMDb Mini Biography By: Anonymous

Amazon Video has the most number of Rosamund Pike’s flixes, followed by Vudu compared to other streaming platforms. See the full graph below.

On average the IMDB score of the movies that Rosamund Pike has worked on is 6.6.

With his wife's disappearance having become the focus of an intense media circus, a man sees the spotlight turned on him when it's suspected that he may not be innocent.

Comedy,Drama,Romance
State of the Union (2019)

State of the Union follows Louise and Tom who meet in a pub immediately before their weekly marital therapy session. Each episode pieces together how their lives were, what drew them together, and what has started to pull them apart.

The adventures of a care-free Chicken named Archibald.

The picaresque and touching story of the politically incorrect, fully lived life of the impulsive, irascible and fearlessly blunt Barney Panofsky.

In 1892, a legendary Army Captain reluctantly agrees to escort a Cheyenne chief and his family through dangerous territory.

An attorney intending on climbing the career ladder toward success finds an unlikely opponent in a manipulative criminal he is trying to prosecute.

Spanning a critical historical time from 1929 to 1940, three young women search for love. The young women leave behind their careless and innocent youth as they pursue love and happiness through places far beyond their expectations.