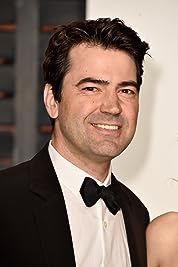 Ronald Joseph Livingston was born on June 5, 1967 in Cedar Rapids, Iowa, to Linda (Rinas), a Lutheran pastor, and Kurt Livingston, an aerospace engineer. He has three siblings, Nick, John Livingston, also an actor, and Jennifer Livingston, a TV news personality at CBS/WKBT in La Crosse, Wisconsin. He is of German, and smaller amounts of Welsh, Scottish, and English, ancestry.Livingston graduated from Marion High School, then attended Yale University with Paul Giamatti and Edward Norton. It was at Yale University that he earned his B.A. degree in Theatre Studies and English Literature. He began his acting career while still an undergraduate, getting his stage credits with the Williamstown Theatre Festival and Manhattan Class Company. In 1989, after graduating from Yale, Livingston moved to Chicago, where he acted in a number of stage productions, including shows at the Goodman Theatre and other venues. His film debut was in Dolly Parton's Sag's offen, Shirlee (1992). He accelerated his film career by moving to Los Angeles in 1993, gaining attention as one of the buddies in the popular hit Swingers (1996). His acting credits include the cult hit Alles Routine (1999), in which he starred opposite Jennifer Aniston, the mini-series Band of Brothers: Wir waren wie Brüder (2001), where he co-starred with Damian Lewis, eight episodes of Sex and the City (1998) (2002-2003), where he starred opposite Sarah Jessica Parker, and the Oscar-winning Adaption: Der Orchideen-Dieb (2002), among his other works. He was nominated for a Golden Globe in 2002 for his performance in Band of Brothers: Wir waren wie Brüder (2001). He also appears as Sebastian Charles in the episode "TB or not TB" (2005) of Fox's popular series Dr. House (2004).In 2006, Livingston became a new spokesman for Sprint Nextel telecommunications company in their new "Power Up" campaign. He is starring as Matt Flannery, the FBI senior negotiator, in the FOX's popular television series Standoff (2006), since the series opened in September 2006.Livingston resides in Los Angeles, California. He married actress Rosemarie DeWitt in 2009. The couple have two children. - IMDb Mini Biography By: Steve Shelokhonov

Amazon Video has the most number of Ron Livingston’s flixes, followed by Vudu compared to other streaming platforms. See the full graph below.

On average the IMDB score of the movies that Ron Livingston has worked on is 6.7.

The story of Easy Company of the U.S. Army 101st Airborne Division, and their mission in World War II Europe, from Operation Overlord, through V-J Day.

Centers on Sam Loudermilk, a recovering alcoholic and substance abuse counselor with a bad attitude. Although he has his drinking under control, Loudermilk discovers that when your life is a mess, getting clean is the easy part.

Three company workers who hate their jobs decide to rebel against their greedy boss.

Hickory, dickory, dock...the Dice Man's back and he's ready to rock. Twenty-five years after taking the entertainment world by storm, Andrew Dice Clay is eager to reclaim his comedy throne.

Paranormal investigators Ed and Lorraine Warren work to help a family terrorized by a dark presence in their farmhouse.

Lucky follows the spiritual journey of a 90-year-old atheist and the quirky characters that inhabit his off the map desert town.

Eight astronauts living aboard an international spacecraft on a mission through the solar system, as the world watches from billions of kilometers away.