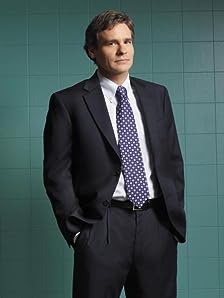 One actor who has deserved much acknowledgment and fame and has had to do without it on a number of occasions is Robert Sean Leonard, known by most as Dr. James Wilson on House M.D. (2004). But his career has spanned a number of classic films, alongside such greats as Daniel Day-Lewis, Christian Bale, Paul Newman, and Denzel Washington.Born Robert Lawrence Leonard in Westland, New Jersey, he attended first Fordham University and then Columbia University. Afterwards he was accepted into the Screen Actor's Guild, changing his middle name to 'Sean'. Leonard's first acting role was My Two Loves (1986) where he was cast in a small role. That same year he was also in The Manhattan Project (1986). The film is a suspense thriller starring John Lithgow and is about a science experiment taken too far.Leonard continued on from these firsts and landed a role in Bluffing It (1987) and then acted in another teen comedy: My Best Friend Is a Vampire (1987). His next role is easily one of his most memorable. He took the second billing in Dead Poets Society (1989) opposite Robin Williams and Ethan Hawke. His character of Neil Perry is a young student whose passion for acting is smothered in fear of his father's wrath and his parents' domination of his life. While Robin Williams earned himself an Oscar nomination, Leonard gave a truly Oscar-worthy performance.The 20-year old actor was well on his way now, and he proceeded to act in another Oscar-nominated film: Mr. & Mrs. Bridge (1990) starring Paul Newman. Leonard resumed the rebellious youth act from "Dead Poets" as he played one of the children caught between their father's conservative ways and their own ideas. Leonard followed up with the not-so successful Married to It (1991). Two years after that Leonard found massive success in three different films.Firstly, he acted in Kenneth Branagh's Much Ado About Nothing (1993). Pulling in 60 million on an 8 million dollar budget, it remains one of the most successful films based off of a play by Shakespeare. Leonard was surrounded by other talents apart in addition to Branagh, such as Brian Blessed, Kate Beckinsale, Denzel Washington, Michael Keaton, and Emma Thompson. Leonard played the character of Claudio and was sadly criticized by several critics for his acting. However others such as Roger Ebert defended the young lead whose character is deceived into thinking his betrothed is unfaithful.In the same year, Leonard took the lead in Swing Kids (1993), which also starred Christian Bale, Frank Whaley, Barbara Hershey and Kenneth Branagh who, rather than upstage Leonard, Bale and Whaley, refused any credit in the film. The film, another success for Leonard, told the story of a group of friends in the Hitler Youth attempting to hold onto something they love-- the Lindy hop. Reviews were mixed, but the film has a faithful following to this day.Also that year Leonard took a smaller role in Martin Scorsese's elaborate and artistic film The Age of Innocence (1993) starring Daniel Day-Lewis, Winona Ryder, and Michelle Pfeiffer. The film is about the aristocrat who must choose between two women and risk scandal. The film earned Ryder an Oscar nomination and a win for Best Costume. Leonard himself played the young son of Danny Archer and plays a crucial role at the end of the film.After these three great films Leonard's career slowed down. Despite acting in three different films in 1996 (the Oliver Stone-produced Killer: A Journal of Murder (1995) starring James Woods, the light-hearted The Boys Next Door (1996), and the romantic I Love You, I Love You Not (1996)) none were as successful as those he made in 1993. Leonard moved onwards to act in (among other things) The Last Days of Disco (1998) and the thriller Ground Control (1998) opposite Kiefer Sutherland, Henry Winkler, and Bruce McGill.Leonard's work changed as the new millennium began. He turned to television as well as continuing film. He acted in the series The Outer Limits (1995) and Wasteland (1999) as well as making movies such as the dramatic film Tape (2001) by Richard Linklater, A Glimpse of Hell (2001) opposite James Caan, and the box office bomb Driven (2001) starring Sylvester Stallone and Burt Reynolds. After a few more films Leonard was cast in the series that gave him much fame.House M.D. (2004) is a drama series about a cynical, antisocial, crippled doctor who is almost always correct in his solutions to medical problems. Leonard, the first actor to be cast in the series, plays the character of Dr. Wilson, the only person that House considers a friend. Wilson is a much more humane person than House, which leads to many debates between himself and House, though he is plagued by his own problems. It is the best known face that Leonard has ever portrayed in his career, and hopefully he will take on other fantastic roles and obtain the honors he so richly deserves. - IMDb Mini Biography By: Bob Stage

Amazon Video has the most number of Robert Sean Leonard’s flixes, followed by Google Play Movies compared to other streaming platforms. See the full graph below.

On average the IMDB score of the movies that Robert Sean Leonard has worked on is 7.0.

An antisocial maverick doctor who specializes in diagnostic medicine does whatever it takes to solve puzzling cases that come his way using his crack team of doctors and his wits.

Three old high school friends meet in a Michigan motel room to dissect painful memories from their past.

Danny, dying of Aids, returns home for his last months. Always close to his mother, they share moments of openness that tend to shut out Danny's father and his sister.

A close-knit group of young kids in Nazi Germany listen to banned swing music from the U.S. Soon, dancing and fun lead to more difficult choices, as the Nazis begin tightening their grip on...

A young boy, his family, and the migrant workers they hire to work their cotton farm struggle against difficult odds to raise and sell the crop. Meanwhile, the boy dreams of living in ...

Biography,Crime,Drama
Killer: A Journal of Murder (1995)

Carl Panzram is sent to Leavenworth Prison for burglary. While there, he is brutally beaten by a guard. Neophyte guard Henry Lesser feels sympathy for Panzram, befriends him, and gets him ...

An amnesiac discovers himself leaping through time between 2000 and 2002 as his past returns to him.