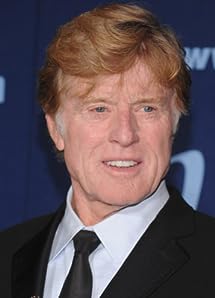 Charles Robert Redford, Jr. was born on August 18, 1936, in Santa Monica, California, to Martha (Hart), from Texas, and Charles Robert Redford, an accountant for Standard Oil, who was originally from Connecticut. He is of English, Scottish, Cornish, and Irish ancestry. Robert's mother died in 1955, the year after he graduated from high school. Robert was a scrappy kid who stole hubcaps in school and lost his college baseball scholarship at the University of Colorado because of drunkenness.After leaving UoC, he spent some time drifting across America, spending a time working in the California oil fields. Having saved enough he moved to Europe studying art in Paris and Florence.Back in the States he decided on a career as a theatrical designer in New York. Enrolling at the American Academy of Dramatic Art he turned to acting making his stage debut in 'Tall Story'. In 1962 he was signed for the stage production of 'Barefoot in the Park' which was a smash hit but it wasn't until 5 years later when it was filmed that he became an important star.Television and stage experience coupled with all-American good looks led to movies and television roles. His breakthrough role was "The Sundance Kid" in Zwei Banditen (1969), when the actor was 33. The Way We Were (1973) and Der Clou (1973), both in 1973, made Redford the number one box office star for the next three years. Redford used his clout to advance environmental causes and his riches to acquire Utah property, which he transformed into a ranch and the Sundance ski resort. In 1980, he established the Sundance Institute for aspiring filmmakers. Its annual film festival has become one of the world's most influential. Redford's directorial debut, Ordinary People (1980), won him the Academy Award as Best Director in 1981. He waited eight years before getting behind the camera again, this time for the screen version of John Nichols' acclaimed novel of the Southwest, The Milagro Beanfield War (1988). He scored with critics and fans in 1992 with the Brad Pitt film Aus der Mitte entspringt ein Fluß (1992), and again, in 1994, with Quiz Show (1994), which earned him yet another Best Director nomination.Lola Van Wagenen (consumer activist) dropped out of college to marry Redford on August 9, 1958. They divorced in 1985 after having four children, one of whom died of sudden infant death syndrome (SIDS). Daughter Shauna Redford, born November 15, 1960, is a painter who married Eric Schlosser on October 5, 1985, in Provo, UT. Her first child, born in January 1991, made Redford a grandfather. Son James Redford (aka Jamie Redford), a screenwriter, was born May 5, 1962. Daughter Amy Redford, an actress; was born October 22, 1970. Redford also has a brother named William. - IMDb Mini Biography By: Gustaf Molin <gumo@hem2.passagen.se> and tonyman 5

Amazon Video has the most number of Robert Redford’s flixes, followed by Google Play Movies compared to other streaming platforms. See the full graph below.

On average the IMDB score of the movies that Robert Redford has worked on is 7.0.

Two grifters team up to pull off the ultimate con.

At the height of the Roaring Twenties, music scouts set out across America to capture the breadth of American music and discovered the artists that would shape our world.

A look at the life, work, activism and controversies of actress and fitness tycoon, Jane Fonda.

Drama,History,Thriller
All the President's Men (1976)

"The Washington Post" reporters Bob Woodward and Carl Bernstein uncover the details of the Watergate scandal that leads to President Richard Nixon's resignation.

From BBC Earth Films, the studio that brought you Earth, comes the sequel - Earth: One Amazing Day, an astonishing journey revealing the awesome power of the natural world. Over the course ...

As Steve Rogers struggles to embrace his role in the modern world, he teams up with a fellow Avenger and S.H.I.E.L.D agent, Black Widow, to battle a new threat from history: an assassin known as the Winter Soldier.

Wrenched reveals how Edward Abbey's anarchistic spirit and riotous novels influenced and helped guide the nascent environmental movement of the seventies and eighties. Through interviews, ...

The accidental death of the older son of an affluent family deeply strains the relationships among the bitter mother, the good-natured father, and the guilt-ridden younger son.