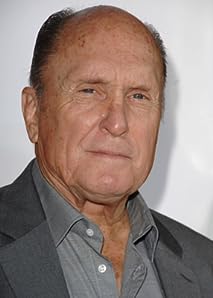 Veteran actor and director Robert Selden Duvall was born on January 5, 1931, in San Diego, CA, to Mildred Virginia (Hart), an amateur actress, and William Howard Duvall, a career military officer who later became an admiral. Duvall majored in drama at Principia College (Elsah, IL), then served a two-year hitch in the army after graduating in 1953. He began attending The Neighborhood Playhouse School of the Theatre In New York City on the G.I. Bill in 1955, studying under Sanford Meisner along with Dustin Hoffman, with whom Duvall shared an apartment. Both were close to another struggling young actor named Gene Hackman. Meisner cast Duvall in the play "The Midnight Caller" by Horton Foote, a link that would prove critical to his career, as it was Foote who recommended Duvall to play the mentally disabled "Boo Radley" in To Kill a Mockingbird (1962). This was his first "major" role since his 1956 motion picture debut as an MP in Somebody Up There Likes Me (1956), starring Paul Newman.Duvall began making a name for himself as a stage actor in New York, winning an Obie Award in 1965 playing incest-minded longshoreman "Eddie Carbone" in the off-Broadway revival of Arthur Miller's "A View from the Bridge", a production for which his old roommate Hoffman was assistant director. He found steady work in episodic TV and appeared as a modestly billed character actor in films, such as Arthur Penn's The Chase (1966) with Marlon Brando and in Robert Altman's Countdown (1967) and Francis Ford Coppola's The Rain People (1969), in both of which he co-starred with James Caan.He was also memorable as the heavy who is shot by John Wayne at the climax of True Grit (1969) and was the first "Maj. Frank Burns", creating the character in Altman's Korean War comedy MASH (1970). He also appeared as the eponymous lead in George Lucas' directorial debut, THX 1138 (1971). It was Francis Ford Coppola, casting The Godfather (1972), who reunited Duvall with Brando and Caan and provided him with his career breakthrough as mob lawyer "Tom Hagen". He received the first of his six Academy Award nominations for the role.Thereafter, Duvall had steady work in featured roles in such films as The Godfather: Part II (1974), The Killer Elite (1975), Network (1976), The Seven-Per-Cent Solution (1976) and The Eagle Has Landed (1976). Occasionally this actor's actor got the chance to assay a lead role, most notably in Tomorrow (1972), in which he was brilliant as William Faulkner's inarticulate backwoods farmer. He was less impressive as the lead in Badge 373 (1973), in which he played a character based on real-life NYPD detective Eddie Egan, the same man his old friend Gene Hackman had won an Oscar for playing, in fictionalized form as "Popeye Doyle" in The French Connection (1971).It was his appearance as "Lt. Col. Kilgore" in another Coppola picture, Apocalypse Now (1979), that solidified Duvall's reputation as a great actor. He got his second Academy Award nomination for the role, and was named by the Guinness Book of World Records as the most versatile actor in the world. Duvall created one of the most memorable characters ever assayed on film, and gave the world the memorable phrase, "I love the smell of napalm in the morning!"Subsequently, Duvall proved one of the few established character actors to move from supporting to leading roles, with his Oscar-nominated turns in The Great Santini (1979) and Tender Mercies (1983), the latter of which won him the Academy Award for Best Actor. Now at the summit of his career, Duvall seemed to be afflicted with the fabled "Oscar curse" that had overwhelmed the careers of fellow Academy Award winners Luise Rainer, Rod Steiger and Cliff Robertson. He could not find work equal to his talents, either due to his post-Oscar salary demands or a lack of perception in the industry that he truly was leading man material. He did not appear in The Godfather: Part III (1990), as the studio would not give in to his demands for a salary commensurate with that of Al Pacino, who was receiving $5 million to reprise Michael Corleone.His greatest achievement in his immediate post-Oscar period was his triumphant characterization of grizzled Texas Ranger Gus McCrae in the TV mini-series Lonesome Dove (1989), for which he received an Emmy nomination. He received a second Emmy nomination and a Golden Globe for his portrayal of Soviet dictator Joseph Stalin in Stalin (1992), and a third Emmy nomination playing Nazi war criminal Adolf Eichmann in The Man Who Captured Eichmann (1996).The shakeout of his career doldrums was that Duvall eventually settled back into his status as one of the premier character actors in the industry, rivaled only by his old friend Gene Hackman. Duvall, unlike Hackman, also has directed pictures, including the documentary We're Not the Jet Set (1977), Angelo My Love (1983) and Assassination Tango (2002). As a writer-director, Duvall gave himself one of his most memorable roles, that of the preacher on the run from the law in The Apostle (1997), a brilliant performance for which he received his third Best Actor nomination and fifth Oscar nomination overall. The film brought Duvall back to the front ranks of great actors, and was followed by a Best Supporting Actor Oscar nod for A Civil Action (1998).Robert Duvall will long be remembered as one of the great naturalistic American screen actors in the mode of Spencer Tracy and his frequent co-star Marlon Brando. His performances as "Boo Radley" in To Kill a Mockingbird (1962), "Jackson Fentry" in Tomorrow (1972), "Tom Hagen" in the first two "Godfather" movies, "Frank Hackett" in Network (1976), "Lt. Col. Kilgore" in Apocalypse Now (1979), "Bull Meechum" in The Great Santini (1979), "Mac Sledge" in Tender Mercies (1983), "Gus McCrae" in Lonesome Dove (1989) and "Sonny Dewey" in The Apostle (1997) rank as some of the finest acting ever put on film. It's a body of work that few actors can equal, let alone surpass. - IMDb Mini Biography By: Jon C. Hopwood

Amazon Video has the most number of Robert Duvall’s flixes, followed by Google Play Movies compared to other streaming platforms. See the full graph below.

On average the IMDB score of the movies that Robert Duvall has worked on is 6.7.

A U.S. Army officer serving in Vietnam is tasked with assassinating a renegade Special Forces Colonel who sees himself as a god.

A television network cynically exploits a deranged former anchor's ravings and revelations about the news media for its own profit.

Biography,Documentary,Music
The Gift: The Journey of Johnny Cash (2019)

Johnny Cash stands among the giants of 20th century American life, but his story remains tangled in mystery and myth. This documentary brings Cash the man out from behind the legend.

A veteran cowboy and his nephew save five Chinese girls from prostitution while trekking from Oregon to Wyoming.

An unemployed defense worker frustrated with the various flaws he sees in society begins to psychotically and violently lash out against them.

A lonely farmer takes in a pregnant woman and looks after her. After she gives birth, tragedy strikes.