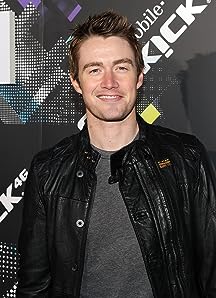 Robert Earl Buckley was born on May 2, 1981 in Los Angeles, California. As a child Robert was on the chubby side and he swam with a t-shirt on. He was also named the most likely to be a superhero by classmates after rescuing four students on horseback. The Southern California native earned an economics degree at the University of California. While in college, Robert appeared as a contestant on the The New Price Is Right (1972). One of his bids was for $1 less than another contestant. After earning his degree, he spent a year and a half working as an economic consultant before moving to Los Angeles to pursue an entertainment career. While working as an economic consultant, he was told that he should get involved in the fashion and show biz career. Robert then resigned from his job at that time and moved to Los Angeles. Right after that, he booked his first commercial.As time passed by, Robert caught the attention of fellow filmmakers. In 2006, he starred in two straight-to-video movies, When a Killer Calls (2006) and Petrified (2006). He then went on to star in in two MyNetworkTV's short-lived prime time soap operas, Fashion House (2006) as photographer Michael Bauer, and American Heiress (2007) as Matthew Wakefield. He also appeared in two short films, Capturing Q (2006) and Archer House (2007), playing the role of Lance alongside Kirstin Benson and Troian Bellisario. In 2007, he appeared in Ghost Whisperer: Unhappy Medium (2007), as Brandon Bishop, starring alongside Jennifer Love Hewitt. Between 2008 and 2009, Robert appeared in another short-lived TV-drama Lipstick Jungle (2008) as Kirby Atwood. He also appeared as Nik in another straight-to-video movie, Killer Movie (2008), directed by Jeff Fisher, and in the Lifetime TV-movie Flirting with Forty (2008), playing the role of Kyle Hamilton, starring opposite Heather Locklear. In 2009, he also appeared in two episodes of Privileged (2008) as David Besser.In 2009, he got his biggest break by then, when he was cast as Clay Evans on One Tree Hill (2003) and starred on it for three seasons as one of the regulars. When it ended in 2012, he began 666 Park Avenue (2012), which lasted for 13 episodes. In 2011, he also appeared in the independent film, The Legend of Hell's Gate: An American Conspiracy (2011) with Jenna Dewan and his One Tree Hill co-star James Lafferty. He also guest starred in Hart of Dixie (2011) and Play It Again, Dick (2014). Since 2015, he has starred in CW's iZombie (2015) by Diane Ruggiero-Wright and Rob Thomas, as Major Lilywhite, along with Rose McIver, Malcolm Goodwin, Rahul Kohli and David Anders.When he is not working he enjoys spending time with his loved ones. He is a huge comic book fan and collects original artwork of Comic Book artists like Jim Lee. - IMDb Mini Biography By: Anastasia Andrew Veno & imoth

Amazon Video has the most number of Robert Buckley’s flixes, followed by undefined compared to other streaming platforms. See the full graph below.

On average the IMDB score of the movies that Robert Buckley has worked on is 6.8.

A medical resident finds that being a zombie has its perks, which she uses to assist the police.

A recently-single woman dreads the thought of going back to her home town in Louisiana for Christmas when she finds out her ex-boyfriend will be there with his new girlfriend.

An anthology series that explores the wonders and terrors of our digital age, from outrageous horror comedy to mind-bending action adventure.

A look at the lives of Nico, Wendy, and Victory -- three of "New York's 50 Most Powerful Women," according to The New York Post.

Set in the world of the cutthroat fashion industry, a ruthless mogul (Derek) defends her company against a hostile takeover.

A divorced mother approaching her 40th birthday falls for a younger man while on vacation.