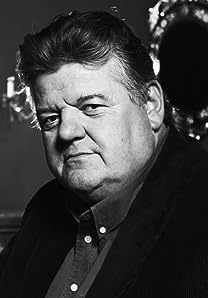 Robbie Coltrane, one of Britain's most popular comedians who was head of debating society at school and won prizes for his art, is now a film star who played in two James Bond films and in the "Harry Potter" franchise.Coltrane was born Anthony Robert McMillan on March 30, 1950, in Rutherglen, a suburb of Glasgow, Scotland, UK. His mother, Jean Ross (Howie), was a teacher and pianist. His father, Ian Baxter McMillan, was a general surgeon who also worked for police pathology. Young Robbie was fond of art, music, films and cars. He was a voracious reader of his dad's books on medicine and crime. At age 12 he made his acting debut on stage at Glenalmond College, delivering rants from "Henry V". At that time he was fascinated with Marlon Brando and Orson Welles.He attended Glasgow Art School, majoring in drawing, painting and film, then studied art at Edinburgh's Moray House College of Education for a year. In 1973 he made a documentary titled "Young Mental Health", which was voted Film Of The Year by the Scottish Education Council. At that time Robbie took the name Coltrane, due to his love of jazz, and began a career of a stand-up comedian at night clubs, at the Edinburgh Festival, as well as an actor with Edinburgh's renowned Traverse Theatre.In 1980 Coltrane made his debut on television as "Border Guard" in BBC's mini-series The Lost Tribe (1980), then made his big screen debut as a limousine driver in Death Watch - Der gekaufte Tod (1980). In 1981 he appeared in his first leading role as Detective Fritz Langley in Subway Riders (1981), by famed underground director Amos Poe.He became a well-known face through appearances in The Comic Strip series, then in Alfresco (1983) and Comic Strip movies Supergrass - Unser Mann bei Scotland Yard (1985) and Ein Papst zum Küssen (1991), among other films. At that time Coltrane had a drinking problem, downing as much as a bottle of whiskey a day. In 1986 he flew to a clinic in Mexico and was treated for obesity. In 1987 his partner for 15 years, Robin Paine, left him for good, leaving her portrait in Coltrane's barn.In 1988 Coltrane met then 18-year-old Rhona Gemmell in a pub. They married and had a son, Spencer, and a daughter, Alice. His career took off during the early 1990s with the leading role as Dr. Eddie "Fitz" Fitzgerald, a forensic psychologist, in the popular TV series Für alle Fälle Fitz (1993).He made such a good performance as Valentin Zukovsky, a KGB man turned St. Petersburg mafia lord, in James Bond 007: GoldenEye (1995) the producers called him back for the same character in James Bond 007 - Die Welt ist nicht genug (1999). Then Coltrane hit another lucrative franchise; he was personally selected by J.K. Rowling as her choice to play half-giant Rubeus Hagrid in the 'Harry Potter' films.In early 1990s Coltrane wrote an autobiography, "Coltrane in a Cadillac", and also starred in the eponymous TV series, Coltrane in a Cadillac (1993), in which he indulges his passion for vintage cars and tells with great humor about his 4000-mile journey across America from Los Angeles to New York. In 2003 he separated from his wife. His interests outside of his acting profession has been reading books, and rebuilding and collecting vintage cars. Robbie Coltrane resides in a converted farmhouse in Stirlingshire, Scotland, UK. - IMDb Mini Biography By: Steve Shelokhonov

Amazon Video has the most number of Robbie Coltrane’s flixes, followed by Google Play Movies compared to other streaming platforms. See the full graph below.

On average the IMDB score of the movies that Robbie Coltrane has worked on is 6.8.

Dr Edward "Fitz" Fitzgerald is a criminal psychologist. He is rather anti-social and obnoxious but he has a gift for solving crimes. Thus he is employed as a consultant by the Manchester Police.

A series of self contained television movies starring performers from London's "Comic Strip" comedy club and their friends. Noted for a high sense of parody of previous movies, literature, and generally everyone in sight.

Rick Spleen is a world-weary comedian who ends up doing far too many corporate jobs to pay the bills.

Paul Finchley (Robbie Coltrane) is a bona fide "national treasure", one half of a popular, long-running comedy double act. However, the famous comedian's world is thrown into chaos when he is accused of historic sexual abuse.

Our "Urban Myths" are stories that have been passed down over time and have now become part of urban folklore. But are they true? We take a slightly tongue in cheek, mischievous - and ...

A man recently released from prison manages to get a job driving a call girl from customer to customer.