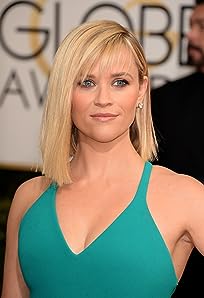 Laura Jeanne Reese Witherspoon was born on March 22, 1976 at Southern Baptist Hospital (now Memorial Medical Center) in New Orleans, Louisiana. She is the second child of Mary Elizabeth "Betty" (Reese) and Dr. John Draper Witherspoon, Sr. Her father was a military surgeon specializing in ear, nose and throat. Her mother was a Registered Nurse who later became a Ph.D in pediatric nursing. Reese spent the first four years of her life in Wiesbaden, Germany, where her father served as a lieutenant colonel in the US Army reserves. Shortly after, John moved the family back to the States, settling in Nashville, Tennessee.Reese was introduced to the entertainment industry at a very early age. At age 7, she began modeling. This led to appearances on several local television commercials. At age 11, she placed first in a Ten-State Talent Fair.In 1990, she landed her first major acting role in Robert Mulligan's Der Mann im Mond (1991). Her role as a 14-year old tomboy earned her rave reviews. Roles in bigger films such as Mein Vater, mein Freund (1993) and Die Spur des Windes (1993) followed shortly after.Following high school graduation in 1994 from Harpeth Hall, a Nashville all girls school, Reese decided to put her acting career on hold and attend Stanford University where she would major in English literature. However, her collegiate plans were shortly dashed when she accepted roles to star in two major motion pictures: Fear - Wenn Liebe Angst macht (1996), alongside Mark Wahlberg, and Freeway (1996) with Kiefer Sutherland. Although neither film was a huge box-office success, they did help to establish Reese as a rising starlet in Hollywood and open the door for bigger and better film roles. Those bigger roles came in movies such as Pleasantville - Zu schön, um wahr zu sein (1998), Election (1999) and Eiskalte Engel (1999).Her breakthrough role came as Elle Woods in the 2001 comedy, Natürlich blond! (2001). The movie was huge box-office smash and established Reese as one of the top female draws in Hollywood. The next year, she scored a follow-up hit with Sweet Home Alabama - Liebe auf Umwegen (2002), which went on to gross over $100 million dollars at the box office. In 2006, she took home the best actress Oscar for her role as June Carter Cash in the Johnny Cash biopic, Walk the Line (2005). In the late 2000s and early 2010s, Reese continued to star in more romantic comedies, such as Mein Schatz, unsere Familie und ich (2008) and Woher weißt du, dass es Liebe ist? (2010). In December 2010, she received a star on the Hollywood Walk of Fame. In the year 2014, she produced both Gone Girl - Das perfekte Opfer (2014) and Der große Trip - Wild (2014), for which she got nominated for best actress Oscar again for her role as Cheryl Strayed.Off the screen, she was married to Ryan Phillippe from 1999 to 2007. They met at her 21st birthday party and subsequently worked together in Eiskalte Engel (1999). They have two children: a daughter, Ava Elizabeth (born 9 September 1999) and a son, Deacon (born 23 October 2003). In March 2011, Reese remarried talent agent Jim Toth. She gave birth to a second son, Tennessee (born 27 September 2012). - IMDb Mini Biography By: SteveG

Amazon Video has the most number of Reese Witherspoon’s flixes, followed by Vudu compared to other streaming platforms. See the full graph below.

On average the IMDB score of the movies that Reese Witherspoon has worked on is 6.6.

An inside look at the lives of the people who help America wake up in the morning, exploring the unique challenges faced by the men and women who carry out this daily televised ritual.

With his wife's disappearance having become the focus of an intense media circus, a man sees the spotlight turned on him when it's suspected that he may not be innocent.

Based on Celeste Ng's 2017 bestseller, "Little Fires Everywhere" follows the intertwined fates of the picture-perfect Richardson family and the enigmatic mother and daughter who upend their lives.

Documentary
This Changes Everything (2018)

An investigative look and analysis of gender disparity in Hollywood, featuring accounts from well-known actors, executives and artists in the Industry.

The story of Vivian Liberto, Johnny Cash's first wife and the mother of his four daughters.

Documentary,Reality-TV
Shine On with Reese (2018)