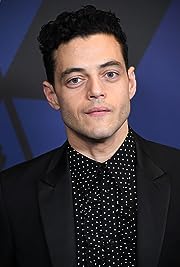 Rami Said Malek (born May 12, 1981) is an American actor. He won a Critics' Choice Award and the Primetime Emmy Award for Outstanding Lead Actor in a Drama Series for his lead role as Elliot Alderson in the USA Network television series Mr. Robot. He also received Golden Globe Award, Screen Actors Guild Award, and TCA Award nominations.Malek has acted in supporting roles for other film and television series such as Night at the Museum trilogy, Fox comedy series The War at Home (2005-2007), HBO miniseries The Pacific (2010), Larry Crowne (2011), Paul Thomas Anderson's The Master (2012), The Twilight Saga: Breaking Dawn - Part 2 (2012), the independent film Ain't Them Bodies Saints (2013) and the dramatic film Short Term 12 (2013). He was also in the video-game Until Dawn (2015) as Joshua "Josh" Washington. Malek is set to portray musician Freddie Mercury in the upcoming biographical drama Bohemian Rhapsody (2018).Rami Said Malek was born in Los Angeles, to an Egyptian Coptic Orthodox family. His late father was a tour guide in Cairo who later sold insurance. His mother is an accountant. Malek was raised in the Coptic Orthodox faith. Malek has an identical twin brother named Sami, younger by four minutes, who is a teacher, and an older sister, Yasmine, who is a medical doctor. Malek attended Notre Dame High School in Sherman Oaks, California, where he graduated in 1999 along with actress Rachel Bilson. Malek attended high school with Kirsten Dunst, who was a grade below and shared a musical theater class with him. He received his Bachelor of Fine Arts degree in 2003 from the University of Evansville in Evansville, Indiana.In 2004, Malek began his acting career with a guest-starring role on the TV series Gilmore Girls. That same year he voiced "additional characters" for the video game Halo 2, for which he was uncredited. In 2005, he got his Screen Actors Guild card for his work on the Steven Bochco war drama Over There, in which he appeared in two episodes. That same year, he appeared in an episode of Medium and was cast in the prominent recurring role of Kenny, on the Fox comedy series The War at Home. In 2006, Malek made his feature film debut as Pharaoh Ahkmenrah in the comedy Night at the Museum and reprised his role in the sequels Night at the Museum: Battle of the Smithsonian (2009) and Night at the Museum: Secret of the Tomb (2014). In the spring of 2007, he appeared on-stage as "Jamie" in the Vitality Productions theatrical presentation of Keith Bunin's The Credeaux Canvas at the Elephant Theatre in Los Angeles.Since 2015 he has played the lead role in the USA Network computer-hacker, psychological drama Mr. Robot. His performance earned him nominations for the Dorian Award, Satellite Award, Golden Globe Award, and Screen Actors Guild Award, as well as wins in the Critics' Choice Television Award for Best Actor in a Drama Series and Primetime Emmy Award for Outstanding Lead Actor in a Drama Series.In September 2016, Buster's Mal Heart, the first movie in which Malek plays a starring role, premiered at the Toronto International Film Festival to positive reviews. In it, Malek plays one man with two lives, Jonah and Buster. In August 2016, it was announced that Malek will co-star with Charlie Hunnam as Louis Dega in a contemporary remake of the 1973 film Papillon. Papillon premiered September 2017 at the 2017 Toronto International Film Festival. In November 2016, it was announced that Malek will star as Freddie Mercury in the upcoming Queen biopic, Bohemian Rhapsody, to be released on November 2, 2018. In February 2017, Malek won the Young Alumnus Award from his alma mater, University of Evansville. In 2017, he was invited to become a member of the Academy of Motion Picture Arts and Sciences. - IMDb Mini Biography By: ahmetkozan

Amazon Video has the most number of Rami Malek’s flixes, followed by Vudu compared to other streaming platforms. See the full graph below.

On average the IMDB score of the movies that Rami Malek has worked on is 7.2.

The Pacific Theatre of World War II, as seen through the eyes of several young Marines.

The story of the legendary British rock band Queen and lead singer Freddie Mercury, leading up to their famous performance at Live Aid (1985).

Documentary
The Show Must Go On: The Queen + Adam Lambert Story (2019)

A documentary on how Adam Lambert took over from the legendary Freddie Mercury as the frontman for the rock group Queen.

Action,Adventure,Thriller
No Time to Die (2021)

James Bond has left active service. His peace is short-lived when Felix Leiter, an old friend from the CIA, turns up asking for help, leading Bond onto the trail of a mysterious villain armed with dangerous new technology.

A family man's chance encounter with a conspiracy-obsessed drifter leaves him on the run from the police and an impending event known as the Inversion.

Dr. Hess Green becomes cursed by a mysterious ancient African artifact and is overwhelmed with a newfound thirst for blood. He however is not a vampire. Soon after his transformation he ...