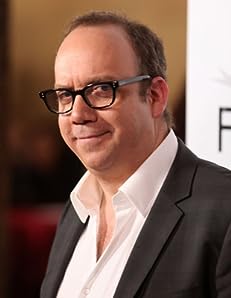 Paul Giamatti is an American actor who has worked steadily and prominently for over twenty years, and is best known for leading roles in the films American Splendor (2003), Sideways (2004), and Barney's Version (2010) (for which he won a Golden Globe), and supporting roles in the films Das Comeback (2005), The Illusionist - Nichts ist wie es scheint (2006), and San Andreas (2015).Paul Edward Valentine Giamatti was born June 6, 1967 in New Haven, Connecticut, and is the youngest of three children. His mother, the former Toni Marilyn Smith, was an actress before marrying. His father, Bart Giamatti (Angelo Bartlett Giamatti), was a professor of Renaissance Literature at Yale University, and went on to become the university's youngest president (in 1986, Bart was appointed president of baseball's National League. He became Commissioner of Baseball on April 1, 1989 and served for five months until his untimely death on September 1, 1989. He was commissioner at the time Pete Rose was banned from the game). Paul's father also wrote six books. Paul's older brother, Marcus Giamatti, is also an actor. His sister, Elena, designs jewelry. His ancestry is Italian (from his paternal grandfather), German, English, Dutch, Scottish, and Irish.Paul graduated from Choate Rosemary Hall prep school, majored in English at Yale, and obtained his Master's Degree in Fine Arts, with his major in drama from the Yale University School of Drama. His acting roots are in theatre, from his college days at Yale, to regional productions (Seattle, San Diego and Williamstown, Massachusetts), to Broadway. - IMDb Mini Biography By: SimeonSite@aol.com

Amazon Video has the most number of Paul Giamatti’s flixes, followed by Google Play Movies compared to other streaming platforms. See the full graph below.

On average the IMDB score of the movies that Paul Giamatti has worked on is 6.5.

Biography,Documentary,History
The Roosevelts: An Intimate History (2014)

A documentary that weaves together the stories of Theodore, Franklin and Eleanor Roosevelt, three members of one of the most prominent and influential families in American politics.

The life of one of the USA's Founding Fathers, its second President, and his role in the nation's first 50 years.

The story of James J. Braddock, a supposedly washed-up boxer who came back to become a champion and an inspiration in the 1930s.

An anthology of leading scientists and how their cutting-edge innovations and advancements will change our lives in the immediate future and beyond. The series intends to bring to life the ...

In turn-of-the-century Vienna, a magician uses his abilities to secure the love of a woman far above his social standing.

Two men reaching middle age with not much to show but disappointment embark on a week-long road trip through California's wine country, just as one is about to take a trip down the aisle.