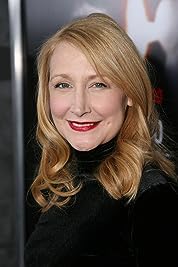 This remarkable, one-of-a-kind actress has, since the early 1990s, intrigued film and TV audiences with her glowing, yet careworn eccentricity and old world-styled glamour. Very much in demand these days as a character player, Patricia Clarkson nevertheless continues to avoid the temptation of money-making mainstream filming while reaping kudos and acting awards in out-of-the-way projects.The New Orleans born-and-bred performer with the given name of Patricia Davies Clarkson was born on December 29, 1959, the daughter of Arthur ("Buzz") Clarkson, a school administrator, and Jackie Clarkson, a local city politician and councilwoman. Patricia demonstrated an early interest in acting and managed to appear in a few junior high and high school-level plays while growing up. She took her basic college studies at Louisiana State University, studying speech for two years, before transferring to New York's Fordham University and graduating with honors in theatre arts.Accepted into the prestigious Yale School of Drama graduate program, she earned her Master of Fine Arts after gracing a wide range of productions including "Electra," "Pericles," "Twelfth Night", "The Lower Depths," "The Misanthrope," "Pacific Overtures" and "La Ronde". From there she took on New York City where she attracted strong East Coast notice in 1986 for her portrayal of Corrina in "The House of Blue Leaves" and in such other plays as "Eastern Standard" (1988) and "Wolf-Man" (1989).Known for her organic approach to acting, the flaxen-maned actress decided to try out her trademark whiskey voice in Hollywood at age 28, making her movie debut as Mrs. Eliot Ness in Brian De Palma's The Untouchables (1987) starring Kevin Costner. The following years she gained attention for playing Samantha Walker in The Dead Pool (1988) where she starred opposite Clint Eastwood's popular "Dirty Harry" character. Playing supportive, wifely types at the onset, she became a strong contender for character stardom by the mid-to-late 1990s, not only on stage but in the independent film arena.On stage Patricia received impressive notices for her contributions to the plays "Raised in Captivity," "The Ride Down Mt. Morgan," "Three Days of Rain" and, in particular, "The Maiden's Prayer," which nabbed her both Outer Critics Circle and Drama Desk Award nominations. In 2004, she finally enacted the classic part she seemed born to play, that of Southern belle Blanche DuBois in the Kennedy Center production of "A Streetcar Named Desire". She earned glowing notices. On camera she was offered roles of marked diversity. From the heavier dramatics of a film like Pharaoh's Army (1995), she could move deftly into light comedy, courtesy of Neil Simon in the TV-movie London Suite (1996). It was, however, her bleak, convulsive portrayal of Greta, a strung-out, heroin-happy German has-been actress, opposite a resurgent Ally Sheedy in the acclaimed art film High Art (1998) that truly put Patricia on the indie map. From this she was handed a silver plate's worth of excitingly offbeat roles. In 2003 alone, Patricia received a special acting prize at the Sundance Film Festival for her superb work in three films: as a somber, grieving artist in The Station Agent (2003), a cold-hearted cancer victim in Pieces of April (2003), and a jokey, get-with-it mom in All the Real Girls (2003). She was nominated for a "Best Supporting Actress" Oscar for the second film mentioned.On TV Patricia received two Emmys for her recurring guest part as Frances Conroy's free-spirited sister in the acclaimed black comedy series Six Feet Under (2001). She also received the New York Film Critics Circle and the National Society of Film Critics awards for her supporting work in the gorgeous, 1950s-styled melodrama Far from Heaven (2002), as a prim and proper Stepford-wife and deceptive friend to Julianne Moore.No matter the size, such as her extended cameos in The Green Mile (1999), All the Real Girls (2003), Miracle (2004) and Elegy (2008), Patricia manages to make the most of whatever screen time she has, often stealing scenes effortlessly. Seen everywhere because of her in-demand status in Hollywood, Patricia recently worked for director/actor Woody Allen. Impressed with her small but excellent contribution in Vicky Cristina Barcelona (2008), she was promoted to a lead in his more recent picture Whatever Works (2009). - IMDb Mini Biography By: Gary Brumburgh / gr-home@pacbell.net

Amazon Video has the most number of Patricia Clarkson’s flixes, followed by Google Play Movies compared to other streaming platforms. See the full graph below.

On average the IMDB score of the movies that Patricia Clarkson has worked on is 6.4.

The story of the American activist struggle against the influence of alcohol, climaxing in the failed early 20th century nationwide era when it was banned.

A reporter confronts the psychological demons from her past when she returns to her hometown to cover a violent murder.

Comedy,Drama,Romance
State of the Union (2019)

State of the Union follows Louise and Tom who meet in a pub immediately before their weekly marital therapy session. Each episode pieces together how their lives were, what drew them together, and what has started to pull them apart.

When his only friend dies, a man born with dwarfism moves to rural New Jersey to live a life of solitude, only to meet a chatty hot dog vendor and a woman dealing with her own personal loss.

The true story of Herb Brooks, the player-turned-coach who led the 1980 U.S. Olympic hockey team to victory over the seemingly invincible Soviet squad.

In 1950s Connecticut, a housewife faces a marital crisis and mounting racial tensions in the outside world.