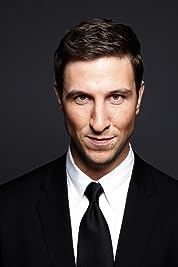 Pablo Tell Schreiber was born in Ymir, British Columbia, Canada, to Lorraine Reaveley, a Canadian psychotherapist, and Tell Schreiber, an American actor. His paternal half-brother is actor Liev Schreiber. Pablo, who is named after Chilean poet Pablo Neruda, was raised in Ymir, and moved to Seattle, Washington, as a teenager.Pablo Schreiber was nominated for a Tony Award for his Broadway debut performance in the revival of Clifford Odets' classic Awake and Sing! directed by Bartlett Sher.Schreiber has appeared in many films, including: Josh Radnor's Happythankyoumoreplease (2010), which won the Audience Award at Sundance, Vicky Cristina Barcelona (2008), Dogtown Boys (2005), Das schwarze Herz (2009), Das Lächeln der Sterne (2008), Der Manchurian Kandidat (2004), Before the War - Allegiance (2012), Breaking Upwards (2009), Fesseln der Tiefe (2005), The Mudge Boy (2003) and Invitation to a Suicide (2004). Upcoming he appears in the independent features Fort Bliss (2014), Die jungen Wilden - Eine sexy Komödie (2015) and Preservation (2014).Television credits include his classic role as "Nick Sobolka" in HBO's critically acclaimed The Wire (2002); and most recently as the menacing villain "William Lewis" on Law & Order: New York (1999), NBC's "Ironside" and as "Pornstache" in Jenji Kohan's hit series Orange Is the New Black (2013). He's also appeared in Stephen Frears' Muhammad Alis größter Kampf (2013) for HBO and on Weeds - Kleine Deals unter Nachbarn (2005), A Gifted Man (2011), Lights Out (2011), Good Wife (2009), White Collar (2009), The Beast (2009), Life on Mars (2008), It's Always Sunny in Philadelphia (2005), Fear Itself (2008), Dirt (2007), John Grisham's A Painted House (2003), Law & Order (1990), Criminal Intent - Verbrechen im Visier (2001), and The Black Donnellys (2007).Schreiber has performed in numerous Broadway and off-Broadway plays including: Desire Under the Elms on Broadway directed by Robert Falls, Rajiv Joseph's Gruesome Playground Injuries at Second Stage, Neil LaBute's Reasons to be Pretty at MCC (for which he won the Drama Desk Award), Dying City at Lincoln Center, Mr. Marmalade at Roundabout, Sin: A Cardinal Deposed at The New Group, Manuscript at the Daryl Roth Theatre, Julius Caesar at the New York Shakespeare Festival, and Blood Orange, his professional debut. - IMDb Mini Biography By: Anonymous

Amazon Video has the most number of Pablo Schreiber’s flixes, followed by Google Play Movies compared to other streaming platforms. See the full graph below.

On average the IMDB score of the movies that Pablo Schreiber has worked on is 6.3.

A former heavyweight boxing champion struggles to find his identity after retiring from the ring.

The limited drama series is a gripping, character-driven thriller based on the 2012 New York Times best selling novel of the same name by William Landay. An assistant DA's world is shattered when his beloved son gets charged with murder.

A recently released ex-convict named Shadow meets a mysterious man who calls himself "Wednesday" and who knows more than he first seems to about Shadow's life and past.

Top U.S. government and military scramble to prevent World War 3 from happening amidst the chaos of a geopolitical crisis.

During an attack on a U.S. compound in Libya, a security team struggles to make sense out of the chaos.

An elite unit of the LA County Sheriff's Dept. and the state's most successful bank robbery crew clash as the outlaws plan a seemingly impossible heist on the Federal Reserve Bank.

Centers on an ultra-competitive surgeon whose life is changed forever when his ex-wife dies and begins teaching him what life is all about from the here-after.

A story of family, of dreams deferred, and of a final chance at redemption. David Paxton, nearing the end of his minor league baseball career, returns to his hometown as much less the hero ...