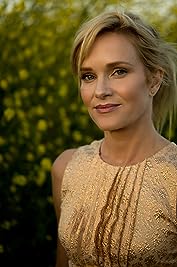 Nicholle is probably best known for her role as "Maggie Sheffield" on La niñera (1993) or "Ryce Newton" in Universals Beethoven: Uno más de la familia (1992), as well as the sequel, Beethoven 2: La familia crece (1993).Nicholle has been keeping busy doing both comedy and dramatic roles on some of Tv's most popular shows. Most recently portraying Peter Scolari's daughter, Miriam Loeb, on Fox's "Gotham" (2014- ) and Reoccurring as Brassy Blonde, Maureen, on ShowTimes "Masters of Sex"Other recent comedy guest stars include the sexually frustrated mother of two, Debby, on the NBC comedy "About a Boy" (TV Series) And struggling plantation actress, Hazel-Fay on Starz, Survivor's Remorse (TV Series)Audiences became familiar with Nicholles dramatic talents when she starred in the title role of the CBS movie, _The Book of Ruth (2004) (TV)_ (Reoccurring). Co-starring with Emmy-winner Christine Lahti, Nicholle portrays an emotionally abused young woman desperately seeking independence from her over-bearing mother.Nicholle was cast in the very first comedy series made for the Independent Film Channel (IFC) The Minor Accomplishments of Jackie Woodman (2006). Starring Laura Kightlinger (La dalia negra (2006), Will & Grace (1998)), Nicholle plays her very ambitious best friend and partner in crime, "Tara Winsel", who will sell her soul to make it in Hollywood.Nicholle Tom was born in Hinsdale, Illinois on March 23, 1978. She has a twin brother, David Tom, and a sister, Heather TomNicholle began classes with the Young Actors Space, when she was 10 and it was there that she discovered her passion for acting. Three years later, her dedication and hard work paid off when she was cast as Charles Grodin's oldest daughter in Ivan Reitman's Beethoven: Uno más de la familia (1992), as well as the sequel, Beethoven 2: La familia crece (1993). Nicholle feels very privileged to be able to play such versatile characters in both comedy and drama.Nicholle had a recurring role as "Sue Scanlon" on the hit TV show Sensación de vivir (1990). She also starred in several made-for-television movies such as CBS's Seducción prohibida (1996) (aka Indecent Seduction), portraying a high school girl seduced by her teacher.In 1992, Nicholle was cast as "Maggie Sheffield" in the CBS sitcom La niñera (1993). The show, starring Fran Drescher, was a huge hit and ran for six successful years.Nicholle has also costarred with Neve Campbell and William H. Macy in the film Panic (2000), which received critical acclaim at the 2000 Sundance Film Festival. She also had a supporting role in Disney's Princesa por sorpresa (2001) with Julie Andrews. Nicholle also voices the character Kara/Supergirl in the animated series La Liga de la Justicia (2001).Nicholle is also very proud of her siblings' success. Her twin brother, David Tom, and older sister, Heather Tom have both won Emmys for their performances on CBS's The Young and the Restless (1973).In the near future, Nicholle looks forward to working on more television, theater and film projects. - IMDb Mini Biography By: Anonymous

Amazon Video has the most number of Nicholle Tom’s flixes, followed by Google Play Movies compared to other streaming platforms. See the full graph below.

On average the IMDB score of the movies that Nicholle Tom has worked on is 5.8.

After being fired from her job and dumped by her boyfriend, a cosmetics saleswoman becomes the nanny to the three children of a rich English widower. As time passes, the two fall for each other.

High-budget science fiction series derived mostly from original stories by top SF authors. The unrelated stories (two by John Varley) are re-set in a future Utopia, Betaville, which is being undermined by out-of-control technologies.

Ava, an entrepreneur, and single dad, Liam meet when he hires her holiday event planning business. She thinks there may be a future for the two of them and his young son, Nathan. That is, ...

In Tate, Oklahoma a popular coach, Pete Nash, is accused of having a sexual relation with 14 years old Amy, one of his school's pupils.

A slobbering St. Bernard becomes the center of attention for a loving family, but must contend with a dog-napping veterinarian and his henchmen.

Beethoven, the St. Bernard dog, becomes a father, but his girlfriend Missy is dognapped, and his puppies are in danger of the same fate.

Crime,Drama,Thriller
I Didn't Kill My Sister (2016)

A woman is the prime suspect in the mysterious drowning death of her anchorwoman sister.