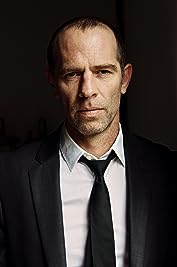 Neil Sandilands was born in a mining town Randfontein, South Africa, on the 1st of May 1975. He is arguably one of the country's most versatile actors and has been an industry professional for over three decades, having started his career at age 14. His most recent work is as "Uncle Wilhelm Leonberger" opposite Tom Hanks in "News of the World" (2019); directed by Paul Greengrass. Robert Brustein, critic, writes "...in the way he instantly segues from calm to rage, Sandilands reminds one of all those inarticulate movie heroes of the fifties, Ben Gazzara, James Dean, Marlon Brando in The Wild One...".A master of disguise, Sandilands formerly starred as the "Big Bad" Clifford Devoe/The Thinker on The CW's hit show "The Flash" (2018). Sandilands is the eldest of three children, his father having been a mining professional and his mother a teacher. He recalls his first performance as being the "mysterious missing sock" in an "epic" production whilst in Kindergarten. Neil attended boarding school in neighboring town Krugersdorp and with the help of an encouraging teacher booked his first television acting gig in "Meester" (The Master) in 1989. At age 17 he was an exchange student in California and in 1996 received his Bachelors Degree in Social Sciences from the Rand Afrikaans University (and) best student in Political Studies, Ethics, Journalism and Development Studies. He received an honorary award for his contribution to Arts & Culture from the University having won its Theatre Festival three years consecutively with plays he had written and starred in, as well initiating an International Film Festival.It is quite unfathomable that the eloquent Sandilands now performs largely in his second language English; his native tongue being Afrikaans - with an entire body of work and numerous awards from his country of origin, to boot. He crossed the international divide in 2003 with the arthouse film "Proteus" by Canadian director John Greyson. By 2007 he was a household name in South Africa and appeared on the cover of many magazines, most notably for his portrayal of the beloved, slightly idiotic character "Bart Kruger" in the soap opera "7de Laan"; but Sandilands had his sights on an international career, and made the transition seamlessly. Also by The CW, he starred as the contentious, mythological character "Titus" in "The 100" Season 3 (2016), whilst, at the same time, he could be seen as series regular in AMC/Sundance TV's popular flagship production "Hap and Leonard" (2016) as "Paco"; ft. James Purefoy, Michael K. Williams, Christina Hendricks, Jimmi Simpson and Bill Sage. He received the nod from ABC to be the mastermind in the 2017 pilot entitled "Salamander" - loosely based on the European version with the same title.Other works, in a long list of credits, include guest star and recurring guest performances in House MD, The Americans, NCIS LA and numerous independent films showcasing his chameleonesque quality. 2018 saw him starring opposite Eric Roberts in the Indie biopic about Frank Sinatra entitled "Frank and Ava" as famed Hollywood director Fred Zinneman. 2019 featured his portrayal as "The Violator" in Lionsgate's absurd Indie film "The Drone" - a contemporary homage to the film "Child's Play". "Coyote Lake" (2019) introduced Sandilands to the Latin market. He plays alongside Oscar Nominee Adriana Barrazza, as well as Manny Perez and Camilla Mendez. He plays "Dirk", a performance in which he doesn't say a single word.Sandilands has been living in Los Angeles since 2011, is single and has no children. He is recipient of the South African Academy of Arts and Sciences award for his directorial work on "Impresario" - a 21 episode documentary. In 2014 he received a Clio, also as documentary director. Sandilands is most proud of the fact that he played rugby in South Africa, America, England, Wales & Ireland and regards the South African Rugby World Cup victory in 2019, for the 3rd time, a miraculous anomaly. He plays the classical guitar and had a number one hit on Itunes South Africa in a duet with South African legend Karen Zoid. As far as acting is concerned he highlights the television series "Orion" (2006) and the film "Ballade van Robbie de Wee" (2013) - both from the pen of detective thriller novelist Deon Meyer. He enjoys fishing and cites his philosophical development as being most influenced by Camus, Wittgenstein, Deleuze and Nietzsche, in reverse order. He would love to portray Nietzsche or the character Meursault from Camus' L'etrenger.He is represented by Stewart Talent and managed by Luber Roklin Entertainment (USA). In Europe he is represented by Samuel & Shaw Ltd. "News of the World" is in post-production as well as "Marfa", starring Tony Todd. In development is "Pulse" by Media Musketeers/Red Mirror Films (2020). Henry Mylne (director) writes: "Vivid, flamboyant (and) thoroughly professional, he doubtlessly brings an electric excitement to both stage and screen that few actors can match." neilsandilands.com @realsandilands - IMDb Mini Biography By: Jay Schachter (Agent)

has the most number of Neil Sandilands’s flixes, followed by Amazon Video compared to other streaming platforms. See the full graph below.

On average the IMDB score of the movies that Neil Sandilands has worked on is 6.5.

Action,Adventure,Drama
News of the World (2020)

A Texan traveling across the wild West bringing the news of the world to local townspeople, agrees to help rescue a young girl who was kidnapped.

Ester and her overbearing mother run a small bed-and-breakfast near the US/Mexico border. One night, two unwanted guests arrive, threatening the safety of everyone. But the two women are ...

A librarian, his wife, and her lover become trapped in a house together and are forced to navigate the chaotic fallout of their indiscretions.