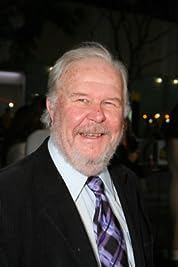 Stocky, genial-looking supporting actor Ned Beatty was once hailed by Daily Variety as the "busiest actor in Hollywood".Ned Thomas Beatty was born in Louisville, Kentucky, to Margaret (Fortney) and Charles William Beatty. He grew up fishing and working on farms. His hometown of St. Matthews, Kentucky, is hardly the environment to encourage a career in the entertainment industry, though, so when asked, "How did you get into show business?" Beatty responds, "By hanging out with the wrong crowd." That "crowd" includes some of the industry's most prominent names, such as John Huston, Steven Spielberg, Robert Altman, Paul Newman, Richard Burton, Charlton Heston, Marlon Brando and Robert Redford.Beatty has garnered praise from both critics and peers as a dedicated actor's actor. He started as a professional performer at age ten, when he earned pocket money singing in gospel quartets and a barber shop. The big city and bright lights did not come easy, though. The first ten years of Beatty's career were spent at the Barter Theater in Abingdon, Virginia. He then moved on to the Erie Playhouse in Pennsylvania, the Playhouse Theater in Houston, Texas, and the prestigious Arena Stage Company in Washington, D.C. He was also a member of Shakespeare in Central Park, Louisville, Kentucky. Later, he appeared in the Broadway production of "The Great White Hope". At the Mark Taper Forum in Los Angeles, he won rave reviews when he starred in "The Accidental Death of an Anarchist".In 1971, Beatty was chosen by director John Boorman for the role of Bobby Trippe in the hit film/backwoods nightmare Beim Sterben ist jeder der Erste (1972). Co-star Burt Reynolds and Beatty struck up a friendship together, and Ned has since been cast by Burt in several other films together, including Der Tiger hetzt die Meute (1973), Ein Supertyp haut auf die Pauke (1975), and the abysmal Der rasende Gockel (1983). Ned's talents were also noticed by others in Hollywood and he was cast in many key productions of the 1970s turning in stellar performance, including an Academy Award nomination of Best Supporting Actor for his role in Network (1976). Beatty was also marvelous in Nashville (1975), under fire from a crazed sniper in Turm des Schreckens (1975), an undercover FBI man in the action/comedy Trans-Amerika-Express (1976), as Lex Luthor's bumbling assistant, Otis, in the blockbuster Superman (1978)... and he returned again with Gene Hackman to play Otis and Lex Luthor again in Superman II - Allein gegen alle (1980).Beatty continued to remain busy throughout the 1980s with appearances in several big budget television productions including Die Tage von Pompeji (1984). However, the overall caliber of the productions in general did not match up to those he had appeared in during the 1970s. Nonetheless, Beatty still shone in films including The Big Easy - Der große Leichtsinn (1986) and Das vierte Protokoll (1987). Into the 1990s, Beatty's work output swung between a mixture of roles in family orientated productions (Gullivers Reisen (1996), Tom Sawyer und Huckleberry Finn - Die Rückkehr nach Hannibal (1990), etc.) taking advantage of his "fatherly" type looks, but he could still accentuate a hard edge, and additionally was cast in Radioland Murders - Wahnsinn auf Sendung (1994) and Im Sumpf des Verbrechens (1995). His many other films include Der Spielgefährte (1982), Die Unbestechlichen (1976), Der Ketzer (1979), Touchdown - Sein Ziel ist der Sieg (1993), Spring Forward (1999), Hear my Song - Ein Traum wird wahr (1991) -- for which he earned a Golden Globe nomination for Best Supporting Actor -- Zauberhafte Zeiten (1992), Spiel des Lebens (1998) and Aufruhr in Holly Springs (1999). Beatty's numerous television credits include three years on the NBC series Homicide (1993), Streets of Laredo (1995), and The Boys (1993).Beatty received an Emmy Award nomination for Best Actor for his performance in Fürs Vaterland zu sterben (1979) opposite Carol Burnett, and a Best Supporting Actor nomination for Family Channel's Last Train Home (1989). Other notable credits include Der Schutzengel (2004), The Execution of Private Slovik (1974), Golda Meir (1982), Pray TV (1982), the miniseries Robert Kennedy and His Times (1985), Lockerbie: A Night Remembered (1998) and T-Bone und Weasel (1992). He also had a recurring role on Roseanne (1988) and performed musically on television specials for Dolly Parton and The Smothers Brothers.In 2001, Beatty returned to his theatrical roots starring in London's West End revival production of Tennessee Williams' "Cat on a Hot Tin Roof" with Brendan Fraser. He also appeared in the production on Broadway in 2003/2004 with Jason Patric and Ashley Judd. In 2006, Beatty completed three features to be released next year: The Walker (2007); a Paul Schrader film also starring Woody Harrelson, Kristin Scott Thomas, and Lily Tomlin; Paramount's Shooter (2007) starring Mark Wahlberg; and Der Krieg des Charlie Wilson (2007), a Mike Nichols film with Tom Hanks, Philip Seymour Hoffman and Julia Roberts. Blessed with eight children, Beatty enjoys golf and playing the bass guitar. He gives himself until the age of 70 to become proficient at both.Also in the 21st century, Beatty turned out a terrific performance in the popular Where the Red Fern Grows (2003). - IMDb Mini Biography By: firehouse44 and Gabe Lang

Amazon Video has the most number of Ned Beatty’s flixes, followed by Google Play Movies compared to other streaming platforms. See the full graph below.

On average the IMDB score of the movies that Ned Beatty has worked on is 6.3.

The toys are mistakenly delivered to a day-care center instead of the attic right before Andy leaves for college, and it's up to Woody to convince the other toys that they weren't abandoned and to return home.

A homicide detective begins to suspect that the black teenager accused of murdering two white girls is being framed by his fellow detectives.

Intent on seeing the Cahulawassee River before it's dammed and turned into a lake, outdoor fanatic Lewis Medlock takes his friends on a canoeing trip they'll never forget into the dangerous American back-country.

An ex convict befriends an elderly coworker as they both try to find meaning in life and forgiveness for their past.

Rudy has always been told that he was too small to play college football. But he is determined to overcome the odds and fulfill his dream of playing for Notre Dame.

After three civil-rights workers are murdered in Mississippi in 1964, a team of FBI agents is sent there to find the killers.