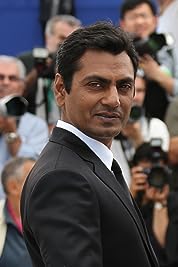 Nawazuddin Siddiqui (born 1974) also known as Nowaz is an Indian film actor who has appeared in some of Bollywood's major films including, Black Friday (2004), New York (2009), Peepli Live (2010), Kahani (2012), Gangs of Wasseypur (2012) and Gangs of Wasseypur - Part 2 (2012).Early life and educationNawazuddin Siddiqui is from Budhana a small town of Muzaffarnagar district in Uttar Pradesh, where his father is a farmer. [2][3][4] Siddiqui grew up amongst nine siblings, seven brothers and two sisters. [5][2]After graduating in science from a local college, he worked as a chemist in a petrochemical company for a short while. But boredom set in soon, and he moved to Delhi, here in the next one and a half year period, he started watching plays, while working a watchman at an office. He got associated with Sakshi Theatre Group and worked with actors like Manoj Bajpai and Saurabh Shukla.Eventually he graduated from the The National School of Drama (NSD), New Delhi in 1996.Now he is a well known actor. CareerAfter graduating from NSD, he moved to Mumbai. Nawazuddin made his Bollywood debut in 1999, with a small role in Sarfarosh starring Aamir Khan. After moving to Mumbai he tried to get work in television, but did not achieve much success. After his debut, he appeared in short roles, where he remained unnoticed, despite his strong performances. He did a short film, The Bypass in 2003, where he appeared with actor, Irrfan Khan. Between 2002 and 2005, he was out of work, and lived in an apartment where he shared with four others, and struggled through his acting carrier by conducting occasional acting workshops. His appearance in Anurag Kashyap's Black Friday (2007) paved way for other powerful roles. His first lead role in a feature film was in Prashant Bhargava's PATANG, which premiered at the Berlin Film Festival, for which Nawazuddin's performance was praised by the world renowned film critic Roger Ebert (awarding the film 4 stars), a role which 'transformed his acting styles'. In 2009, he appeared in a cameo role in hit song "emotional attyachar" in a movie Dev D, in his moniker as Rangila along with his duo Rasila (known together as Patna ke Presley). However it was his role of a journalist in Aamir Khan Productions's Peepli Live (2010). That movie first got him a recognition as an actor. This was followed by a role as police informer Gopi in biopic, Paan Singh Tomar, directed by Tigmanshu Dhulia, also in the same year.He, however became a household name post Kahaani (2012), where he played the archetypal short tempered cop Khan. Gangs of Wasseypur followed which furthered his fame. He played his first lead role as Sonu Duggal in Ashim Ahluwalia's Miss Lovely that premiered at the 2012 Cannes Film Festival, a role Nawazuddin describes as his "most real performance so far." Nawazuddin also played a lead role in his following films, Gangs of Wasseypur - Part II and Aatma. He appeared in Aamir Khan's 2012 release, Talash. Gangs of Wasseypur has been touted as a career defining film for Nawazuddin, where he played the role of Faizal Khan, a second son of Sardar Khan, played by Manoj Bajpai. His gaudy style of dress, magnificent accent and out-of-the-way mannerism in Gangs of Wasseypur left an impression on Bollywood critics. His film PATANG, initially released in the U.S. and Canada, garnered much attention for Nawazuddin with rave reviews from the New York Times, Los Angeles Times and Roger Ebert.Siddiqui is best known for his roles in The Lunchbox (2013), which premiered as part of the International Critics' Week at the 2013 Cannes Film Festival and won him multiple awards, Manto (2018), for which his groundbreaking performance won him Best Actor at the 2018 Asian Pacific Screen Awards[8] and Raman Raghav 2.0 for which he won the Fancine Malaga Award in Spain[9] and in Asia Pacific Screen Awards[10] both in the category of Best Actor. Nawazuddin Siddiqui is the only Actor in the world having 8 films officially selected and screened at the prestigious Cannes Film Festival.[11] Inspite of being very busy with film shoots, Siddiqui continues to take time out to do farming in his native place in Uttar Pradesh (North India).[12] He is an active motivational speaker, drawing on his struggles and experiences to inspire. He stars in two Emmy nominated series, Sacred Games (2019), a two-season Netflix original series for which he was conferred with the GQ - Men of the Year Award 2018 for the second time[13] and United Kingdom's McMafia directed by James Watkins. Recently Nawazuddin Siddiqui was awarded with the highest honorary, The Lesley Ho Asian Film Talent Award at the prestigious Singapore International Film Festival[14] for his globally appreciated series Sacred Games duology. - IMDb Mini Biography By: ajay saini

Netflix has the most number of Nawazuddin Siddiqui’s flixes, followed by Amazon Video compared to other streaming platforms. See the full graph below.

On average the IMDB score of the movies that Nawazuddin Siddiqui has worked on is 6.9.

A link in their pasts leads an honest cop to a fugitive gang boss, whose cryptic warning spurs the officer on a quest to save Mumbai from cataclysm.

A clash between Sultan and Shahid Khan leads to the expulsion of Khan from Wasseypur, and ignites a deadly blood feud spanning three generations.

An Indian man with a magnanimous heart takes a young mute Pakistani girl back to her homeland to reunite her with her family.

A pregnant woman's search for her missing husband takes her from London to Kolkata, but everyone she questions denies having ever met him.

A mistaken delivery in Mumbai's famously efficient lunchbox delivery system connects a young housewife to an older man in the dusk of his life as they build a fantasy world together through notes in the lunchbox.

An innocent man turns brutal when his family gets killed in a bank robbery and one of the perpetrators escapes. 15 years later, he begins his deadly game of vengeance.

The film is a biographical account of writer Saadat Hasan Manto's life and is set in 1940s India.