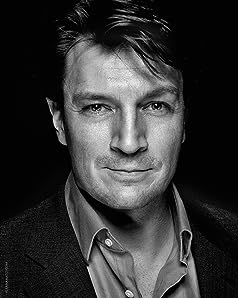 Nathan Fillion was born on 27 March 1971 in Edmonton, Alberta, Canada. He is the son of Cookie (Early) and Bob Fillion, both retired English teachers, and has an older brother, Jeff. In Canada, he attended Holy Trinity Catholic High School, Concordia University College of Alberta and University of Alberta. Before moving to New York City in 1994, he participated in improv theatre, including Theatresports with Rapid Fire Theatre and improvised soap opera Die-Nasty. He also appeared in a TV Movie Absturz in die weiße Hölle (1993) starring Richard Chamberlain and in Strange and Rich (1994).Fillion's first regular role was on a daytime soap opera, Liebe, Lüge, Leidenschaft (1968), as Joey Buchanan, for which role he was nominated in 1996 for a Daytime Emmy Award. He left the series after three years in 1997. During the late 1990's, he appeared in small roles in the films Der Soldat James Ryan (1998) and Eve und der letzte Gentleman (1999). Fillion also guest starred on Total Security: Das Bootie, Maggie Winters: Mama's Got a Brand New Bag (1998) and Outer Limits - Die unbekannte Dimension: Starcrossed (1999). His biggest break by then happened in 1998, when he was cast as Johnny Donnelly on the 2nd season of Ein Trio zum Anbeißen (1998) opposite Traylor Howard, Ryan Reynolds, Richard Ruccolo and Suzanne Cryer. He starred on the show for 60 episodes.After "Two Guys" ended in 2001, Fillion gained critical acclaim and a large cult of fans when he starred as Captain Malcolm Reynolds on the Joss Whedon's Firefly: Der Aufbruch der Serenity (2002). Unfortunately the show was prematurely canceled in late 2002. He also guest starred on several episodes of two short lived TV shows, Das Geheimnis von Pasadena (2001), as Rev. Glenn Collins and Miss Match (2003), as Adam Logan. In 2003, Whedon gave Fillion another chance to display his range when he cast Fillion as the twisted preacher Caleb, a villain, in the final season of Buffy: Im Bann der Dämonen (1997). Before and after "Firefly", Fillion appeared in many movies, Wes Craven präsentiert Dracula (2000), Alligator Point (2003), Wicked Game - Ein böses Spiel (2003), Outing Riley (2004) and Hollywood Division (2004).Whedon vowed to resurrect "Firefly" in some way, and Fillion played Captain Reynolds again in the feature-film Serenity: Flucht in neue Welten (2005). Fillion followed this film with more big screen leading roles, in the horror-comedy Slither - Voll auf den Schleim gegangen (2006), in White Noise: Fürchte das Licht (2007), in the indie hit Jennas Kuchen - Für Liebe gibt es kein Rezept (2007) opposite Keri Russell and in Trucker (2008). He also continued to be a force in television, starring in the short-lived Fox-TV series Drive (2007) and appearing on a recurring role as Dr. Adam Mayfair on the 4th season of ABC's Desperate Housewives (2004), opposite Dana Delany. He also appeared on Lost: I Do (2006) and was a voice actor on many video games (e.g. Halo 3 (2007)).In 2008, he took his first singing part (and cemented his cult appeal) as Captain Hammer in Whedon's musical Internet smash Dr. Horrible's Sing-Along Blog (2008), with Neil Patrick Harris, Felicia Day and Simon Helberg. In 2009, he was cast as the title character Richard Castle in ABC's hit television series, Castle (2009). The show has aired more than 160 episodes and Nathan Fillion has won four People's Choice Awards for Favorite Dramatic TV Actor, as of 2016. In 2018, Fillion took the starring role in The Rookie (2018) as John Nolan, a contractor who starts over as a rookie police officer in the LAPD after a life-altering event. Besides starring on "Castle", he has appeared in many movies, in Super - Shut Up, Crime! (2010) as The Holy Avenger, in Joss Whedon's Viel Lärm um nichts (2012) as Dogberry, the incompetent chief of security, in Percy Jackson: Im Bann des Zyklopen (2013) as Hermes and in Thrilling Adventure Hour Live (2015).His credits as a voice-actor are numerous: on The Venture Bros.: Bright Lights, Dean City (2010) as Brown Widow, in Wonder Woman (2009) as Steve Trevor, in Green Lantern: Emerald Knights (2011), Justice League: Doom (2012), Justice League: The Flashpoint Paradox (2013) and Justice League: Throne of Atlantis (2015) as Hal Jordan/Green Lantern, in Robot Chicken: DC Comics Special (2012) as Green Lantern/Mr. Freeze, on American Dad (2005), in Pixar's Die Monster Uni (2013) as Johnny, in Guardians of the Galaxy (2014) as Monstrous Inmate and on Willkommen in Gravity Falls (2012) as Preston Northwest. He also voices the lead, Shojun in the animated movie, Yamasong: March of the Hollows (2017). He has also continued voicing characters in video games, such as in Destiny (2014) and in Halo 5: Guardians (2015).He has also guest starred on The Daly Show: The Daly Superheroes (2012) as himself, on Community (2009) as Bob Waite, on The Big Bang Theory: The Comic Book Store Regeneration (2015) as himself, on Kroll Show: Twins (2015) as Mountie McMinniman, on Con Man (2015) as Jack Moore and on Drunk History: Space (2015) as Wernher Von Braun. He also narrated the documentary, Highway of Tears (2015). - IMDb Mini Biography By: Azure_Girl; imoth

Amazon Video has the most number of Nathan Fillion’s flixes, followed by Vudu compared to other streaming platforms. See the full graph below.

On average the IMDB score of the movies that Nathan Fillion has worked on is 7.2.

Five hundred years in the future, a renegade crew aboard a small spacecraft tries to survive as they travel the unknown parts of the galaxy and evade warring factions as well as authority agents out to get them.

An aspiring supervillain must balance his career and his pursuit of a beautiful do-gooder.

Dan Harmon and his celebrity friends get together to play a fantasy role playing game.

Starting over isn't easy, especially for John Nolan who, after a life-altering incident, is pursuing his dream of joining the LAPD. As their oldest rookie, he's met with skepticism from those who see him as just a walking midlife crisis.

After a serial killer imitates the plots of his novels, successful mystery novelist Richard "Rick" Castle receives permission from the Mayor of New York City to tag along with an NYPD homicide investigation team for research purposes.

Wray Nerely is a struggling actor who starred as a spaceship pilot on Spectrum, a cult classic science fiction series. He navigates the odd people and incidents he encounters along the way while learning to love the fans he has.

The crew of the ship Serenity try to evade an assassin sent to recapture one of their members who is telepathic.