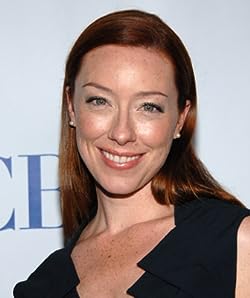 Molly Parker, the extremely talented and versatile Canadian actress is best known in the United States for playing the Western widow "Alma Garret" on the cable-TV series Deadwood (2004). Raised on a commune, she described as "a hippie farm" in Pitt Meadows, B.C., Parker got the acting bug when she was 16 years old, after 13 years of ballet training. Parker's uncle was an actor, and his agent took her on as a client, enabling her to launch her career in small roles on Canadian television. She enrolled at Vancouver's Gastown Actors' Studio after she graduated from high school, and continued to act on TV in series and TV-movies while learning her craft at acting school.Parker began attracting attention when she appeared as the daughter of a lesbian military officer in the TV-movie Serving in Silence: The Margarethe Cammermeyer Story (1995). She earned a Gemini nomination (the Canadian TV industry's equivalent of the Emmy) for her performance in the TV-movie Der Vatermörder (1994). However, it was her debut in theatrical films that gave her her big breakthrough, playing a necrophiliac in Lynne Stopkewich's 1996 film Kissed (1996). It was "Kissed" that set Molly's career into overdrive.A friend got her an audition for the low-budget independent feature film, and she hit if off with the director, who not only cast her, but became her friend. As the character "Sandra Larson", a poetic soul obsessed with death who engages in sexual congress with a corpse, Parker created a sympathetic character in a difficult role. The film garnered her rave revues and she won a Genie Award, the Canadian cinema's Academy Award, for her performance. She parlayed the accolades into a sustained career on film and in TV.On TV, Parker was part of the cast of CBC-TV's six-part sitcom Twitch City (1998), playing the girlfriend of Don McKellar, which enabled her to showcase her comedic skills. Other memorable TV roles was the female rabbi on Home Box Office's series Six Feet Under - Gestorben wird immer (2001) and, of course, the regular role on HBO's Deadwood (2004). She has appeared in many ambitious films, including Jeremy Podeswa's The Five Senses (1999), István Szabó's Sunshine - Ein Hauch von Sonnenschein (1999) and Michael Winterbottom's Wonderland (1999). She also re-teamed with director Lynne Stopkewich for Suspicious River - Fatale Berührung (2000).Parker made waves with another provocative film with sex as its subject, director Wayne Wang's The Center of the World (2001). In the movie, Parker played a San Francisco lap dancer who becomes a paid escort to a Silicon Valley nerd. For her performance, she was nominated for an Independent Spirit Award. In 2002, she was nominated twice as best supporting actress at the Genies for her roles in the British/Canadian co-production The War Bride (2001) and Bruce Sweeney's Last Wedding (2001), winning for her appearance in the latter film.Parker's reputation as an outstanding actress is based on her assaying of strong, yet flawed, definitely complex women in character-leads and supporting parts in challenging films. Not only does she convey intelligence, but there is an unconscious elegance to her, a true inner beauty that radiates on-screen. She will be gracing the screen, both large and small, with her unique presence for many years to come. - IMDb Mini Biography By: Jon C. Hopwood

Amazon Video has the most number of Molly Parker’s flixes, followed by Vudu compared to other streaming platforms. See the full graph below.

On average the IMDB score of the movies that Molly Parker has worked on is 6.5.

As America celebrates its 200th birthday, two generations of friends and neighbors in a Chicago suburb explore new freedoms and seek connections with each other in the midst of the socio/sexual revolution.

After crash-landing on an alien planet, the Robinson family fight against all odds to survive and escape, but they're surrounded by hidden dangers.

A teenager coping with paranoid schizophrenia hopes his new experimental drug treatment will help him navigate high school and the outside world.

In 1953, Army scientist Frank Olson takes a fatal plunge from a hotel window. In 1975, a bombshell report ties his death to a top-secret experiment.

Defense Attorney Mitch McDeere is targeted for execution by the Chicago Mob in retaliation for bringing down a profitable Mob-operated Memphis law firm ten years earlier.

In 1965, 13 y.o. paperboy Andy is paired up with a geek on a project in the popular junior high teacher's class. Andy learns and grows from it.