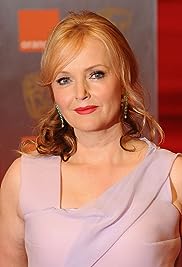 Miranda Richardson was born in Southport, Lancashire, England on March 3, 1958, to Marian Georgina (Townsend) and William Alan Richardson, a marketing executive. She has one sister, eight years her senior. Her parents and sister are not involved in the performing arts. At an early age she performed in school plays, having shown a talent and desire to "turn herself into" other people. She has referred to it as "an emotional fusion; you think yourself into them". This mimicry could be of school friends or film stars.She left school (Southport High School for Girls) at the age of 17, and originally intended becoming a vet. She also considered studying English literature in college, but decided to concentrate on drama and enrolled at the Bristol Old Vic Theatre School (as did many well-known British actors). After three years she graduated and moved into repertory theatre. She became affiliated with the Library Theatre in Manchester in 1979, where she became an assistant stage manager. She obtained her Equity card, and after several regional productions, first appeared on the London stage (Moving at Queens Theatre) in 1981. British television roles soon followed, and then film.Since then, Miranda has moved into the international arena, and has made films in America, France and Spain. Television work (on both sides of the Atlantic) continues, as does some stage work. Her roles are diverse, but powerful and engaging. She has been quoted as stating "what I basically like is doing things I haven't done before" and this continually comes through in the variety of roles she has played in her career. She is also selective in the roles she takes, being uninterested in performing in the standard Hollywood fare, and preferring more offbeat roles. She was approached to play the Glenn Close role in Eine verhängnisvolle Affäre (1987), but found it "regressive in its attitudes". Her attitude is summed up by a quote from an interview that appeared in the New York Times (Dec 27 1992): "I would rather do many small roles on TV, stage or film than one blockbuster that made me rich but had no acting. And if that's the choice I have to make, I think I've already made it".According to "1994 Current Biography Yearbook", she resides in South London with her two Siamese cats, Otis and Waldo. She has now moved to West London. Her hobbies include drawing, walking, gardening, fashion, falconry, and music. She, by her own admission, is a loner and lives rather modestly. An actor who studied with Ms Richardson at the Bristol Old Vic Theatre in the late 1970s described her as "a strong minded, specially gifted, rather pretty young woman who enjoys wearing jewelry. She wore toe rings, which in the late 1970s and especially in England, were a rarity and considered rather racy." He also remarked on her drive, even then, to be an actress of the highest caliber. - IMDb Mini Biography By: Michael G Hebert

Amazon Video has the most number of Miranda Richardson’s flixes, followed by Google Play Movies compared to other streaming platforms. See the full graph below.

On average the IMDB score of the movies that Miranda Richardson has worked on is 6.6.

A tale of the bungling of Armageddon features an angel, a demon, an eleven-year-old Antichrist, and a doom-saying witch.

Crime,Drama,Mystery
And Then There Were None (2015)

Ten strangers are invited to an island by a mysterious host, and start to get killed one by one. Could one of them be the killer?

Will Travers is an analyst at a New York City-based federal intelligence agency who is thrown into a story where nothing is as it appears to be.

After a genial spirit shows the benevolent Ebenezer Blackadder visions of his unscrupulous ancestors, he resolves to mend his generous ways.

A mysterious Inspector investigates the wealthy Birling family and their dinner guests following the suicide of a young woman.

Revolves around a love triangle between a conservative English aristocrat, his mean socialite wife and a young suffragette.

The social rivalry between two women in the 1930s when Lucia rents Mapp's house for the summer.