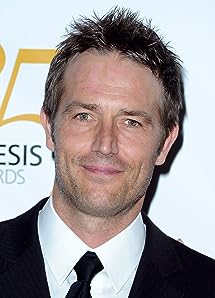 Michael Vartan came to international acclaim with his starring role as 'Agent Michael Vaughn' on the worldwide hit ABC series, "Alias," which ran for five seasons. With upcoming film and television roles, he continues to explore the different facets of his talent and versatility.Vartan currently stars in E!'s original one-hour drama series "The Arrangement," about the relationship between an A-list movie star 'Kyle West' (Josh Henderson) and his beautiful young co-star 'Megan Morrison' (Christine Evangelista). Vartan portrays 'Terrence Anderson,' best friend, producing partner and mentor to 'Kyle,' as well as leader of a fictitious self-help organization called the Institute of the Higher Mind. His influence on Kyle's life is pervasive, and when 'Kyle' begins to date 'Megan,' 'Terrence' becomes particularly invested, presenting her with a marriage contract to ensure that the 'The Arrangement' goes as planned. E! will debut the 10-episode first season on March 5, 2017.He played a key role in Season 2 of A&E's "Bates Motel" as 'George,' a charming divorcé who caught the eye of Norma (played by Emmy-nominee Vera Farmiga). He also had a recurring role in USA Network's "Satisfaction." He previously starred for three seasons alongside Jada Pinkett Smith in TNT's medical drama "HawthoRNe."On the feature front, Vartan next appears in the indie thriller "Small Town Crime," with Academy Award nominee John Hawkes. The storyline revolves around a boozing ex-cop 'Mike' (Hawkes) who becomes a makeshift private investigator to solve the murder of a young prostitute. Vartan plays 'Detective Scott Crawford' who is investigating the murder and knows that 'Mike' has messed up in the past, yet to a certain extent still believes in him and trusts him to carry out his private investigation as long as he reports back to him with his findings. The film will make its World Premiere at the SXSW Film Festival on March 11, 2017.Vartan previously starred opposite Zoe Saldana ("Avatar") in TriStar Pictures' "Colombiana." In 2011, he starred opposite Jessica Chastain, as 'Brad Benton' in the independent film "Jolene: My Life," for director Dan Ireland ("The Whole Wide World"). Based on a story from critically acclaimed author, E.L. Doctorow ("Ragtime," "Billy Bathgate").He previously starred opposite Jane Fonda and Jennifer Lopez in New Line's summer blockbuster, "Monster-In-Law." He also starred opposite Robin Williams in the psychological thriller, "One Hour Photo." Additional film credits include a starring role opposite Drew Barrymore in the romantic comedy "Never Been Kissed."Born in Paris to a French father and an American mother, Vartan grew up in the tiny Normandy village of Fleury until the age of 16 when he moved to Los Angeles to live with his mother, who encouraged him to take acting classes.After starring in two small French films, Vartan grabbed the attention of the film world with his breakthrough performance in the 1993 Italian epic, "Fiorile," directed by Paolo and Vittorio Taviani. Soon after, Vartan signed with an agent and landed a role in "To Wong Foo, Thanks for Everything! Julie Newmar," playing the bigoted small-town thug who harasses three drag queens (Wesley Snipes, Patrick Swayze and John Leguizamo). He went on to star opposite David Schwimmer as one of his best friends in "The Pallbearer," a comedy of escapades surrounding three old high school pals coping with bachelorhood, marriage and a case of mistaken identity. He also starred in Sony Pictures Classics' "The Myth of Fingerprints" with Julianne Moore.For television, Vartan appeared in the two-part TNT mini-series "The Mists of Avalon," a retelling of the legendary story of Camelot. He portrayed 'Sir Lancelot,' opposite Angelica Huston, Julianna Margulies and Joan Allen.In his limited free time, Vartan feeds his obsession with sports, particularly ice hockey. "If it weren't for acting, I'd give anything to play a professional sport," he says, still holding onto his life-long dream. - IMDb Mini Biography By: Core PR

Amazon Video has the most number of Michael Vartan’s flixes, followed by Vudu compared to other streaming platforms. See the full graph below.

On average the IMDB score of the movies that Michael Vartan has worked on is 6.2.

Sydney Bristow (Jennifer Garner) is an international spy recruited out of college, trained for espionage and self-defense.

A mentally unstable photo developer targets a middle-class family after his obsession with them becomes more sick and disturbing than any of them could imagine.

A young woman, after witnessing her parents' murder as a child in Bogota, grows up to be a stone-cold assassin.

An American journalist on assignment in the Australian outback encounters a man-eating crocodile while trapped on a rapidly flooding mud island.

A newspaper reporter enrolls in high school as part of research for a story.

As a single mother and the Chief Nursing Officer at Richmond Trinity Hospital in Richmond, Virginia, Christina Hawthorne makes care-taking her life's work.

Two college students kill their roommate and make it look like a suicide.