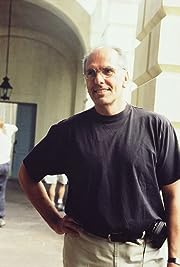 Michael Cristofer was awarded a Pulitzer Prize and an Antoinette Perry "Tony" Award for the Broadway production of his play, The Shadow Box. Other plays include Breaking Up (Primary Stages), ICE, (Manhattan Theatre Club); Black Angel, (Circle Repertory Company); The Lady and the Clarinet starring Stockard Channing, Amazing Grace starring Marsha Mason and Man in the Ring, the story of prize fighter Emile Griffith, which received the American Theater Critics Award for best American play in 2017.Mr. Cristofer's film work includes the screenplays for Endstation Malibu (1980) directed by Paul Newman (Golden Globe Award, Emmy nomination), Der Liebe verfallen (1984), with Meryl Streep and Robert DeNiro, Die Hexen von Eastwick (1987) with Jack Nicholson, Fegefeuer der Eitelkeiten (1990) directed by Brian De Palma, Breaking Up (1997) starring Russell Crowe and Salma Hayek, Georgia O'Keeffe (2009) (Writers Guild Award) with Joan Allen and Jeremy Irons, Casanova (2005) starring Heath Ledger, and Chuck - Der wahre Rocky (2016) starring Liev Schreiber. His directing credits include Gia - Der Preis der Schönheit (1998), for HBO Pictures starring Angelina Jolie, Mercedes Ruehl, and Faye Dunaway, which was nominated for 5 Emmys and for which he won a Director's Guild Award. He next directed Body Shots (1999) for New Line Cinema and Original Sin (2001) starring Antonio Banderas.For eight years he worked as co-artistic director of River Arts Repertory in Woodstock, N.Y., where he wrote stage adaptations of the films Love Me Or Leave Me and the legendary Casablanca, directed Joanne Woodward in his own adaptation of Ibsen's Ghosts and produced the American premier of Edward Albee's Three Tall Women - a production which later moved to Off-Broadway. His most recent works for the theater are in workshop at the Actor's Studio where he is a member. After a fifteen year hiatus, Mr. Cristofer has returned to his acting career appearing in Romeo and Juliet (NY Shakespeare Festival), Trumpery by Peter Parnell, Three Sisters (Williamstown Theater), Body of Water with Christine Lahti, and the acclaimed Broadway revival of A View from the Bridge with Liev Schreiber and Scarlett Johansson.His film work includes The Girl in the Book (2015), The Other Woman (2009) with Natalie Portman and Michel Franco's Chronic with Tim Roth. He created the role of Gus in Tony Kushner's The Intelligent Homosexual... at the Public Theater and starred in Stephen Belber's Don't Go Gentle at MCC Theater. He appeared as the infamous Truxton Spangler in the AMC series Rubicon (2010) and was recently seen in the NBC series, Smash (2012), American Horror Story (2011), Showtime's Ray Donovan (2013). On the USA Network series, Mr. Robot (2015), he plays Evil Corp CEO, Philip Price. - IMDb Mini Biography By: Michael Cristofer

Amazon Video has the most number of Michael Cristofer’s flixes, followed by Vudu compared to other streaming platforms. See the full graph below.

On average the IMDB score of the movies that Michael Cristofer has worked on is 6.5.

Will Travers is an analyst at a New York City-based federal intelligence agency who is thrown into a story where nothing is as it appears to be.

After the assassination of U.S. President Abraham Lincoln in 1865, his widow Mary Todd Lincoln's life becomes more difficult at every turn.

The story of the life of Gia Carangi, a top fashion model from the late 1970s, from her meteoric rise to the forefront of the modeling industry, to her untimely death.

Comedy,Fantasy,Horror
The Witches of Eastwick (1987)

Three single women in a picturesque village have their wishes granted, at a cost, when a mysterious and flamboyant man arrives in their lives.

A drama inspired by the life of heavyweight boxer Chuck Wepner, who had a once-in-a-lifetime bout with Muhammad Ali that would inspire the film Rocky (1976).

The fabled romantic Giacomo Casanova, after failing to win the affection of the Venetian woman Francesca Bruni, strives to discover the real meaning of love.