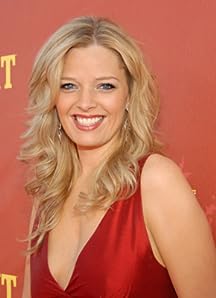 Actress, Melissa Peterman, is from Minneapolis, Minnesota, USA. After graduating from Minnesota State University with theater as one of her majors, she was cast as "Madeline Monroe" in Hey City Theater's production of "Tony & Tina's Wedding". After more than 600 performances, she went on to work as a writer and performer at the improvisational comedy theater, "The Brave New Workshop". While with "The Brave New Workshop", she also performed at the "Chicago Improv Festival" and the "Big Stink Comedy Festival" in Austin, Texas. She made her film debut, with character role, "Hooker #2" in the Coen brothers' Oscar-winning movie, Fargo - Blutiger Schnee (1996). On TV, she appeared in the Oxygen sketch comedy show, Running with Scissors (2000) and guest-starred on Just Shoot Me - Redaktion durchgeknipst (1997). Actress, Melissa Peterman lives in Los Angeles, California, with her husband & actor, John Brady + their son, Riley David Brady. The duo became parents on Thursday, October 20th, 2005. Their parenthood began 2,329 days, (332 weeks & 5 days), after their matrimony occurred on Saturday, June 5th, 1999.Melissa Peterman's date of birth, Thursday, July 1st, 1971, & her motherhood date, Thursday, October 20th, 2005, differs 12,600 days, equaling 1,800 weeks exactly. - IMDb Mini Biography By: Ryan McIntosh

Amazon Video has the most number of Melissa Peterman’s flixes, followed by DIRECTV compared to other streaming platforms. See the full graph below.

On average the IMDB score of the movies that Melissa Peterman has worked on is 6.1.

A 20-something bachelor bartender becomes an unlikely parent when an ex-girlfriend leaves a baby girl on his doorstep.

Reba McEntire stars as the titular character in this smash sitcom about a single mom of three, navigating life in a Houston suburb.

Family
My Babysitter the Super Hero (2022)

A teenage boy and his little sister are thrust into an adrenaline-charged adventure when they find out their gregarious babysitter is in fact the legendary super hero known as Agent-Action.

Follows the life of a single blue collar mom, who has recently moved her family to a rich suburban neighborhood to try and provide a better life for her kids, while proudly retaining her 'working class' roots.

Rebecca Korda and her two brothers, Sam and Max, are left alone on opening night of their family-owned restaurant.

"Bet on Your Baby" is a game show that focuses on five families that have toddlers between two and three and a half years old. The families make bets on what their child will do next and the money won goes towards a college fund.