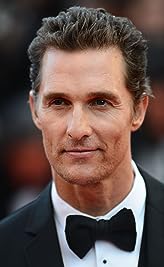 American actor and producer Matthew David McConaughey was born in Uvalde, Texas. His mother, Mary Kathleen (McCabe), is a substitute school teacher originally from New Jersey. His father, James Donald McConaughey, was a Mississippi-born gas station owner who ran an oil pipe supply business. He is of Irish, Scottish, English, German, and Swedish descent. Matthew grew up in Longview, Texas, where he graduated from the local High School (1988). Showing little interest in his father's oil business, which his two brothers later joined, Matthew was longing for a change of scenery, and spent a year in Australia, washing dishes and shoveling chicken manure. Back to the States, he attended the University of Texas in Austin, originally wishing to be a lawyer. But, when he discovered an inspirational Og Mandino book "The Greatest Salesman in the World" before one of his final exams, he suddenly knew he had to change his major from law to film.He began his acting career in 1991, appearing in student films and commercials in Texas and directed short films as Chicano Chariots (1992). Once, in his hotel bar in Austin, he met the casting director and producer Don Phillips, who introduced him to director Richard Linklater for his next project. At first, Linklater thought Matthew was too handsome to play the role of a guy chasing high school girls in his coming-of-age drama Tökéletlen idők (1993), but cast him after Matthew grew out his hair and mustache. His character was initially in three scenes but the role grew to more than 300 lines as Linklater encouraged him to do some improvisations. In 1995, he starred in A texasi láncfűrészes gyilkos visszatér (1995), playing a mad bloodthirsty sadistic killer, opposite Renée Zellweger.Shortly thereafter, moving to L.A., Matthew became a sensation with his performances in two high-profile 1996 films Lone Star - Ahol a legendák születnek (1996), where he portrayed killing suspected sheriff and in the film adaptation of John Grisham's novel Ha ölni kell (1996), where he played an idealistic young lawyer opposite Sandra Bullock and Kevin Spacey. The actor was soon being hailed as one of the industry's hottest young leading man inspiring comparisons to actor Paul Newman. His following performances were Robert Zemeckis' Kapcsolat (1997) with Jodie Foster (the film was finished just before the death of the great astronomer and popularizer of space science Carl Sagan) and Steven Spielberg's Amistad (1997), a fact-based 1839 story about the rebellious African slaves. In 1998, he teamed again with Richard Linklater as one of the bank-robbing brothers in A Newton fiúk (1998), set in Matthew's birthplace, Uvalde, Texas. During this time, he also wrote, directed and starred in the 20-minute short The Rebel (1998).In 1999, he starred in the comedy Ed TV (1999), about the rise of reality television, and in 2000, he headlined Jonathan Mostow's U-571 (2000), portraying officer Lt. Tyler, in a WW II story of the daring mission of American submariners trying to capture the Enigma cipher machine.In the 2000s, he became known for starring in romantic comedies, such as Szeretném, ha szeretnél (2001), opposite Jennifer Lopez, and Hogyan veszítsünk el egy pasit 10 nap alatt? (2003), in which he co-starred with Kate Hudson. He played Denton Van Zan, an American warrior and dragons hunter in the futuristic thriller 2020: A tűz birodalma (2002), where he co-starred with Christian Bale. In 2006, he starred in the romantic comedy Anyám nyakán (2006), and later as head coach Jack Lengyel in Több, mint sport (2006), along with Matthew Fox. In 2008, he played treasure hunter Benjamin "Finn" Finnegan in Bolondok aranya (2008), again with Kate Hudson. After playing Connor Mead in Excsajok szelleme (2009), co-starring with Jennifer Garner, McConaughey took a two year hiatus to open different opportunities in his career. Since 2010, he has moved away from romantic comedies.That change came in 2011, in his first movie after that pause, when he portrayed criminal defense attorney Mickey Haller in Az igazság ára (2011), that operates mostly from the back seat of his Lincoln car. After this performance that was considered one of his best until then, Matthew played other iconic characters as district attorney Danny Buck Davidson in Börni, az eszelős temetős (2011), the wild private detective "Killer" Joe Cooper in Gyilkos Joe (2011), Mud in Mud (2012), reporter Ward Jensen in Az újságos fiú (2012), male stripper club owner Dallas in Magic Mike (2012), starring Channing Tatum. McConaughey's career certainly reached it's prime, when he played HIV carrier Ron Woodroof in the biographical drama Mielőtt meghaltam (2013), shot in less than a month. For his portrayal of Ron, Matthew won the Best Actor in the 86th Academy Awards, as well as the Golden Globe Award for Best Actor, among other awards and nominations. The same year, he also appeared in Martin Scorsese's A Wall Street farkasa (2013). In 2014, he starred in HBO's A törvény nevében (2014), as detective Rustin Cohle, whose job is to investigate with his partner Martin Hart, played by Woody Harrelson, a gruesome murder that happened in his little town in Louisiana. The series was highly acclaimed by critics winning 4 of the 7 categories it was nominated at the 66th Primetime Emmy Awards; he also won a Critics' Choice Award for the role.Also in 2014, Matthew starred in Christopher Nolan's sci-fi film Csillagok között (2014), playing Cooper, a former NASA pilot. - IMDb Mini Biography By: Tzvetislav Samardjiev, tzvetislav@abv.bg, Marcelo Gaia, and Pedro Borges

Amazon Video has the most number of Matthew McConaughey’s flixes, followed by Vudu compared to other streaming platforms. See the full graph below.

On average the IMDB score of the movies that Matthew McConaughey has worked on is 6.6.

A team of explorers travel through a wormhole in space in an attempt to ensure humanity's survival.

In 1985 Dallas, electrician and hustler Ron Woodroof works around the system to help AIDS patients get the medication they need after he is diagnosed with the disease.

An American expat tries to sell off his highly profitable marijuana empire in London, triggering plots, schemes, bribery and blackmail in an attempt to steal his domain out from under him.

Action,Adventure,Animation
Kubo and the Two Strings (2016)

A young boy named Kubo must locate a magical suit of armour worn by his late father in order to defeat a vengeful spirit from the past.

An examination of the Oscar-winning director who brought to life some of cinema's most beloved motion pictures.

The adventures of high school and junior high students on the last day of school in May 1976.