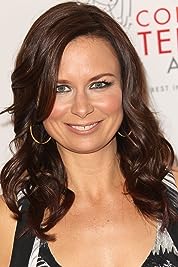 Mary Lynn Rajskub is an American actress, comedienne and singer who is best known as a co-star of Kiefer Sutherland on the popular television series 24: Twenty Four (2001).She was born on June 22, 1971, in Detroit, Michigan, into a family of Irish, Czech, and Polish ancestry. She was brought up in Trenton, Michigan. In 1989 she graduated from Trenton High School, then attended Detroit's College for Creative Studies, majoring in painting, before she transferred to the San Francisco Art Institute, graduating as a painter. She also studied music and acting, and for a few years she performed as a stand-up comedian at various clubs and restaurants. In 1995, Rajskub made her debut on television, she was cast by David Cross as one of the original cast members of Mr. Show with Bob and David (1995). After her split from Cross, she left the show during its second season, and briefly took a job as a coffee brewer at Seattle's Best Coffee. In 1999 she joined the cast of 'Veronica's Closet' TV series, as Cloe, appearing in 15 episodes of the show.As a skilled guitar player, Rajskub has been part of the comic duo called 'Girls Guitar Club' and appeared on the NBC's 'Late Friday' TV show. In the 2000s she has ventured into more dramatic roles, most notably her role as analyst Chloe O'Brian opposite Kiefer Sutherland on the popular TV series 24: Twenty Four (2001). She joined the show in 2003 at the beginning of the show's third season, then returned in the show's fourth season as a recurring cast member. Her character has been a hit with viewers and critics. Rajskub became a main cast member in the show's fifth season, then replaced Kim Raver as a female lead, with top billing second only to Kiefer Sutherland in the season of 2006 - 2007, until her character was arrested and skipped a few episodes in 2007.While she has been mainly a television star, Rajskub also played bit parts on the big screen in Magnolia (1999), Der Mondmann (1999), Heißer Trip nach Texas (2000), among her other works. She offered mesmerizing performances in Mysterious Skin - Unter die Haut (2004), Sweet Home Alabama - Liebe auf Umwegen (2002), and in Punch-Drunk Love (2002), then played a few more visible roles such as Janet Stone in Firewall (2006), opposite Harrison Ford, and as Pam in Little Miss Sunshine (2006). In 2006 Harrison Ford presented Rajskub with the Female Breakthrough Award for her "high concept comedic stage productions, as well as her TV and film acting skills." She was also nominated for the Screen Actors Guild Awards two times, in 2005, and in 2007.Besides her work in film and on television, Mary Lynn Rajskub has been performing locally in Hollywood with her Girls Guitar Club show. Outside of her acting profession she is fond of art and is known as a regular visitor of LA's best museums, she also has been writing, painting and exhibiting her works at art shows and art auctions.Mary Lynn Rajskub is currently residing in Los Angeles, California. - IMDb Mini Biography By: Steve Shelokhonov

Amazon Video has the most number of Mary Lynn Rajskub’s flixes, followed by Vudu compared to other streaming platforms. See the full graph below.

On average the IMDB score of the movies that Mary Lynn Rajskub has worked on is 5.9.

Jack Bauer comes out of hiding in London to head off a massive terrorist attack while being hunted down by American forces dispatched by President James Heller.

Jack Bauer, Director of Field Ops for the Counter-Terrorist Unit of Los Angeles, races against the clock to subvert terrorist plots and save his nation from ultimate disaster.

Anthology television series based on Steven Soderbergh's "The Girlfriend Experience."

Comedian Doug Benson sits on stage during the stand up performances of his friends and interrupts, sometimes adding to the performances and sometimes distracting it.

Chicks dig a British accent so either learn from the real deal or prepare to swoon when the Daily Show's John Oliver headlines his own series featuring wildly original stand-up sets from ...

Cooked with Cannabis is a competitive cooking show where three chefs make cannabis infused meals for a chance to win $10,000. Co-hots Kelis and Leather Storrs judge the contestants with the...

Cold Brook is the story of two ordinary guys in a small town who embark on an extraordinary adventure. It's a story about coming home; something everyone, everywhere has an innate desire to do.

Peter and Raquel are on a mission to get their oddball son into the best preschool in the country. Unfortunately, they accidentally run over the dog of the school's elitist admissions officers on their way to the interview.