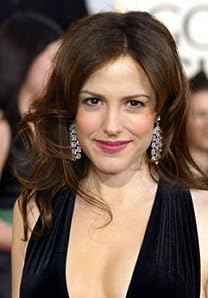 Southern-bred Mary-Louise Parker was born on August 2, 1964 in Fort Jackson, South Carolina, the youngest of four children of Judge John Morgan Parker, and the former Caroline Louise Morell. She is of mostly Swedish, English, and Scottish descent. Her father's occupation took the family both around the country and abroad while growing up.Parker showed potential in her teens and majored in acting in her college years, graduating from the North Carolina School of the Arts. Beginning her acting career with a part on the daytime soap Ryan's Hope (1975), Mary decided to test the waters in New York, and after work on the off-Broadway stage in the late 1980s, made her Broadway debut with "Prelude to a Kiss" in 1990, where she won the Theatre World Award, the Clarence Derwent Award and a Tony nomination. Films and TV quickly followed and she quickly gained attention. She provided both poignant and amusing as the token femme friend to a group of gay men in the AIDS drama Longtime Companion (1989), but really caught fire with her feisty, standout performance in Fried Green Tomatoes (1991), holding her own against such female powerhouses as Jessica Tandy, Kathy Bates and Mary Stuart Masterson. Dubbed by some as the "long-suffering girl next door", she played such noble offbeat miserables and cast-asides in Grand Canyon (1991), Naked in New York (1993), Bullets Over Broadway (1994), The Client (1994) Boys on the Side (1995), in which she was the AIDS victim this time, The Portrait of a Lady (1996), The Maker (1997), Let the Devil Wear Black (1999), Red Dragon (2002) and Pipe Dream (2002). Preferring quality over quantity, she perfected her craft with offbeat roles in independent features and did not abandon her theater roots. She copped a slew of acting prizes for her stage work in "How I Learned to Drive" (1996) and, most notably, "Proof" in 2000, wherein she won nearly every award there is to attain, including the prestigious Tony. Her marquee name still does not command what it should, but a picture or production with Mary-Louise Parker in it usually guarantees a strong critical reception. Unmarried, she did enter into a longtime companionship with actor Billy Crudup after the twosome appeared opposite each other in the 1996 play, "Bus Stop". They went their separate ways in 2003, amid major controversy (she was pregnant at the time).Mary Louise continues to divide her time equally and skillfully on TV, film and the stage. The powerful TV miniseries adaptation of Tony Kushner heralded award-winning Broadway play Angels in America (2003), directed by Mike Nichols, earned the actress supporting performance Golden Globe and Emmy awards. She also earned a Tony nomination for the Broadway show, "Reckless", a year later but truly turned heads and wowed audiences the year after that in the highly acclaimed 7-season Showtime series Weeds (2005), earning another Golden Globe and several Emmy nominations for her amazing performance as Nancy Botwin, a relatively naïve suburban housewife and mother who courts serious trouble with the law and drug cartels when she turns into a neighborhood drug dealer for sustenance after her husband dies suddenly. Since then she has appeared in RED 2 (2013), R.I.P.D. (2013), Jamesy Boy (2014), Behaving Badly (2014), Chronically Metropolitan (2016)Adopting a second child from Ethiopia, Mary Louise was acknowledged in 2013 for her significant contributions to Hope North, an organization that works in the educating and healing of young victims caught in Uganda's civil war. Her memoir-in-letters, Dear Mr. You, came out in 2015. - IMDb Mini Biography By: Gary Brumburgh / gr-home@pacbell.net

Amazon Video has the most number of Mary-Louise Parker’s flixes, followed by Vudu compared to other streaming platforms. See the full graph below.

On average the IMDB score of the movies that Mary-Louise Parker has worked on is 6.3.

When a suburban mother turns to dealing marijuana in order to maintain her privileged lifestyle after her husband dies, she finds out just how addicted her entire neighborhood already is.

A housewife who is unhappy with her life befriends an old lady in a nursing home and is enthralled by the tales she tells of people she used to know.

Biography,Crime,Drama
The Assassination of Jesse James by the Coward Robert Ford (2007)

Robert Ford, who's idolized Jesse James since childhood, tries hard to join the reforming gang of the Missouri outlaw, but gradually becomes resentful of the bandit leader.

The social stigma and discrimination of autistic children is present in the movie Miracle Run. The life of Corrine Morgan-Thomas, the mother of autistic twins Stephen and Philip, changes ...

A ninety-one-year-old carpenter (Sidney Poitier), who is still in completely good health, has to fight developers who are trying to force him to sell his land.

A nurse fights for custody of her H.I.V. positive foster daughter with her inept, junkie mother. Finally they come to an agreement that they should all live together.