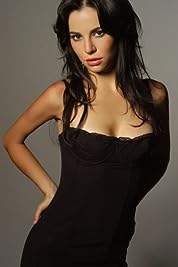 Amazon Video has the most number of Martha Higareda’s flixes, followed by Pantaya compared to other streaming platforms. See the full graph below.

On average the IMDB score of the movies that Martha Higareda has worked on is 6.0.

Set in a future where consciousness is digitized and stored, a prisoner returns to life in a new body and must solve a mind-bending murder to win his freedom.

Teams of chefs vie to impress some of the world's toughest palates as they whip up iconic dishes from different nations in this reality cooking competition.

Claudio Caballero decides to gamble $500,000 dollars in a desperate attempt to raise the cash necessary to bring the world's biggest band (U2) to Mexico.

A Marichi group will leave their hometown for the first time to perform at a national competition in Mexico City. After being selected, this band of seven set out to find an eighth member ...

A stifled, small-town man stuck in a dead end life, runs away to Mexico to be a mariachi singer. MARIACHI GRINGO is a musical tour-de-force exploring the reality of "following your dreams" ...

The story of Eva and her blind cousin Sofia (Martha Higareda), who were inseparable as children, with Eva the loyal companion who helped Sofia through her tough adolescent years. When Eva ...

The movie takes place in the year 1807 in the city of Puebla, New Spain. Leo San Juan, a shy 9-year-old boy, lives with his grandmother and his older brother Nando. Leo is constantly ...

Young lady that goes by multiple names pursues ways of relieving her guilt from her dark past.