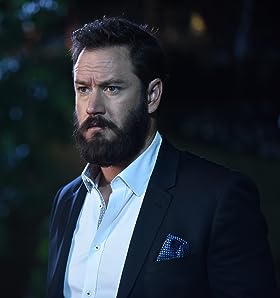 Mark-Paul Gosselaar was born March 1, 1974 in Panorama City, California. His father, Hans Gosselaar, who is from the Netherlands, is of German and Dutch Jewish descent, and was a plant supervisor at Anheuser-Busch. His mother, Paula (van den Brink), is of Dutch-Indonesian background; she worked as an airline hostess. His parents are divorced. He has an older brother, Mike, and two older sisters, Linda and Sylvia. In 1989, after a career with small movies and commercials, Gosselaar started in the teen hit Saved by the Bell (1989), co-starring Tiffani Thiessen who played his girlfriend, Kelly Kapowski, throughout the show's run. The characters eventually married each other after the show and its spin-off, Saved by the Bell: The College Years (1993) , ended production.He starred with Geena Davis in Commander in Chief (2005) for executive producer Steven Bochco, with whom he also worked when he starred as detective John Clark in Bochco's critically-acclaimed drama NYPD Blue (1993) Gosselaar's other television credits include TV movies Atomic Twister (2002), The Princess & the Marine (2001), For the Love of Nancy (1994), Saved by the Bell: Wedding in Las Vegas (1994), She Cried No (1996), Dying to Belong (1997) and Born Into Exile (1997).On the big screen, Gosselaar appeared in Dead Man on Campus (1998), as well as the independent films Beer Money (2001) and Sticks and Stones (2008).In 2019, Mark-Paul began starring on the show Mixed-ish (2019).Gosselaar's sporting interests include cycling, motocross and auto racing. He is also an avid pilot. Gosselaar lives outside of Los Angeles. He married model Lisa Ann Russell in 1996 in Maui, Hawaii. The two divorced in 2011. In 2012, he married advertising executive Catriona McGinn. He has two children with Lisa and two children with Catriona. - IMDb Mini Biography By: R Brown

Amazon Video has the most number of Mark-Paul Gosselaar’s flixes, followed by Vudu compared to other streaming platforms. See the full graph below.

On average the IMDB score of the movies that Mark-Paul Gosselaar has worked on is 6.1.

Lawyers and lifelong friends Jared Franklin and Peter Bash are recruited by a large firm's major partner after winning a high-profile case.

Former law school classmates reunite in court when they take on rival clients.

When a botched U.S. government experiment turns a group of death row inmates into highly infectious vampires, an orphan girl might be the only person able to stop the ensuing crisis.

A young pitcher becomes the first woman to play in the Major Leagues.

Comedy,Family,Romance
Saved by the Bell (1989)

A close-knit group of six friends get through their teens together while attending Bayside High School in Palisades, California.

Fourteen-year-old Chris Mills goes to court to prevent his parents from ending their marriage.

Follows Bow's parents, Paul and Alicia, who are forced to move from a hippie commune to the suburbs to better provide for their family after the dissolution of their cult.

Based on a true story about the forbidden love between Jason Johnson, a U.S. Marine, and Meriam Al-Khalifa, a Bahraini princess.