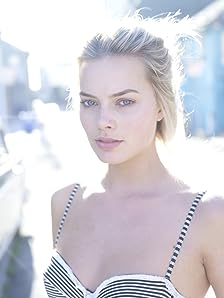 Margot Elise Robbie was born on July 2, 1990 in Dalby, Queensland, Australia to Scottish parents. Her mother, Sarie Kessler, is a physiotherapist, and her father, is Doug Robbie. She comes from a family of four children, having two brothers and one sister. She graduated from Somerset College in Mudgeeraba, Queensland, Australia, a suburb in the Gold Coast hinterland of South East Queensland, where she and her siblings were raised by their mother and spent much of her time at the farm belonging to her grandparents. In her late teens, she moved to Melbourne, Victoria, Australia to pursue an acting career.From 2008-2010, Robbie played the character of Donna Freedman in the long-running Australian soap opera, Les voisins (1985), for which she was nominated for two Logie Awards. She set off to pursue Hollywood opportunities, quickly landing the role of Laura Cameron on the short-lived ABC series, Pan Am (2011). She made her big screen debut in the film, Il était temps (2013).Robbie rose to fame co-starring alongside Leonardo DiCaprio, portraying the role of Naomi Lapaglia in Martin Scorsese's Oscar nominated film, Le loup de Wall Street (2013). She was nominated for a Breakthrough Performance MTV Movie Award, and numerous other awards.In 2014, Robbie founded her own production company, LuckyChap Entertainment. She also appeared in the World War II romantic-drama film, Suite française (2014). She starred in Diversion (2015) and Les Survivants (2015), and made a cameo in The Big Short: Le casse du siècle (2015).In 2016, she married Tom Ackerley in Byron Bay, New South Wales, Australia.She starred as Jane Porter in Tarzan (2016), Tanya Vanderpoel in Whiskey Tango Foxtrot (2016) and as DC comics villain Harley Quinn in Suicide Squad (2016), for which she was nominated for a Teen Choice Award, and many other awards.She portrayed figure skater Tonya Harding in the biographical film Moi, Tonya (2017), receiving critical acclaim and a Golden Globe Award nomination for Best Actress - Motion Picture Comedy or Musical. - IMDb Mini Biography By: Pedro Borges

Amazon Video has the most number of Margot Robbie’s flixes, followed by Google Play Movies compared to other streaming platforms. See the full graph below.

On average the IMDB score of the movies that Margot Robbie has worked on is 6.4.

A faded television actor and his stunt double strive to achieve fame and success in the final years of Hollywood's Golden Age in 1969 Los Angeles.

A young woman, traumatized by a tragic event in her past, seeks out vengeance against those who cross her path.

Competitive ice skater Tonya Harding rises amongst the ranks at the U.S. Figure Skating Championships, but her future in the activity is thrown into doubt when her ex-husband intervenes.

The relationship between writer AA Milne and his son, Christopher Robin, and how this became the inspiration for Winnie the Pooh.

Period drama about the pilots and flight attendants who once made Pan Am the most glamorous way to fly.