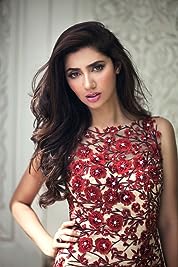 Mahira Khan, born December 21, 1984, is a Pakistani actress often regarded as Pakistan's biggest superstar. She is adored and lauded for playing a variety of roles and characters since she embarked on her acting career in 2011. Mahira first started out as a VJ on MTV Pakistan hosting a widely popular live show 'Most Wanted'. She then went on to make her film debut with the critically acclaimed and commercially successful 'Bol' directed by Shoaib Mansoor, in 2011. The film went on to become one of Pakistan's highest grossing films of all time. Mahira rose to prominence by playing the lead role in the Pakistani drama 'Humsafar'. The TV drama is regarded as a turning point for the Pakistani Television industry with many attributing the series for playing a huge role in the revival of the local drama industry. Since then Mahira has played lead roles in the country's most popular television dramas and movies, including Humsafar, Shehrezaat, Sadqay Tumhare, Bin Roye, Ho Mann Jahan and Verna. With three Pakistani box office hits to her name now, Mahira was cast opposite Bollywood superstar Shahrukh Khan in Hindi film 'Raees' in 2017. This marked an important milestone for Pakistani actors since no actor before her had ever been handed a Bollywood debut opposite any of the three Khans of Hindi cinema. She also achieved a unique feat when she became the first and only Pakistani actress to enter Bollywood's '100 crore' (100 million) club after her latest movie Raees amassed more than 100 crore rupees at the box office. Mahira's recent performance in Shoaib Mansoor's 'Verna', where she plays the lead, garnered tremendous praise and appreciation from the world over. This was a small film with a big message highlighting rape, misogyny and the worth of women in Pakistani society and culture. According to the New York Times "The film - which overcame an initial ban imposed because of its subject matter - has inspired Pakistani women to tap into the spirit of the viral #MeToo campaign to expose sexual harassment and create their own public platform for victims and their supporters. With the Pakistani film industry struggling to survive and wary of issue-oriented projects, the film's release has provided a timely opportunity to talk about a difficult topic," You can read the full article online. Throughout the short span of her acting career, Mahira has garnered immense love, admiration and accolades. She has won a series of local awards for 'Best Actor Female'; including Lux Style Awards, Hum Awards, and ARY Awards, and international recognition; the Masala Awards, the Femina ME Awards, Vogue Beauty Awards and most recently the Beirut International Awards Festival for her work in the Film and TV Industry. Mahira was recently announced as the very first Pakisani ambassador for Loreal Hair Care. She is also the face of many big brands in Pakistan; Lux, Veet and Coca Cola to name a few. Mahira has transcended borders when it comes to her fan base with millions following the superstar's dramas and films in India, Bangladesh, the Middle East and the US and UK. Her TV drama Humsafar has been dubbed into Arabic and broadcast by MBC in the Middle East, while it was also broadcast in India on Zee Zindagi. She is the number one Pakistani Actor with the largest following on social media with numbers surpassing millions on Facebook, Instagram and Twitter. Mahira is a source of inspiration for many and has actively spoken on many platforms such as the Global Teacher's Prize Ceremony by the Varkey Foundation in Dubai, the Aga Khan University Special Lecture Series in Karachi and TEDxLahore, motivating audiences of all ages with her zest and wisdom. An avid reader and Mahira enjoys writing in her spare time. She dreams of one day directing her very own film and working in an Academy Award winning movie. With three new projects in the pipeline, Mahira will be starring in 'Saath Din Mohabbat In' opposite Sheheryar Munawar this Eid followed by Bilal Lashari's 'Maula Jutt 2' opposite Fawad Khan later this year. - IMDb Mini Biography By: Seher Hafeez

Netflix has the most number of Mahira Khan’s flixes, followed by Amazon Video compared to other streaming platforms. See the full graph below.

On average the IMDB score of the movies that Mahira Khan has worked on is 7.3.

Ashar and Khirad are forced to get married due to desperate circumstances. Sara is Ashar's childhood friend and believed she would marry Ashar. Khirad is caught within this love-triangle with other internal and external forces at play.

An arranged engagement between a village girl and her city cousin shows signs of true love, but an indiscretion decades ago could doom their romance.

Three college friends are passionate for music and face difficulties for their common dream.

An aspiring actress falls in love with a big movie star.

The story follows a young man on a quest to find his true love in a crowded Karachi neighbourhood. He must overcome the obstacles, both spiritual and physical, to achieve his goals.