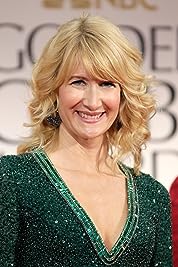 Laura Dern was born on February 10, 1967 in Los Angeles, the daughter of actors Bruce Dern and Diane Ladd. Dern was exposed to movie sets and the movie industry from infancy, and obtained several bit parts as a child. Her parents divorced when Dern was two and Dern lost contact with her father for several years as a result.Her parents' background and her own early taste of the moviemaking world soon convinced the young Dern to pursue acting herself. Like so many young actors, her decision may have been influenced by social awkwardness -- the child of 60s counterculture parents, she was steeped in Eastern mysticism and political radicalism, and was seen as an oddball by her more conservative classmates. Her gawky physical appearance didn't help - even before her teens, she had achieved most of her impressive 5' 10" height, was rail-skinny (other than precociously wide hips), had huge feet and a slouching posture, and for all this was often teased by classmates. Perhaps the nine-year-old Dern found refuge by studying acting at the Lee Strasberg Theater Institute.The first success for the young Dern came in 1980, with a role in Adrian Lyne's Foxes (1980), a teen movie starring Jodie Foster. She followed this with several small parts, or parts in small movies, such as Ladies and Gentlemen, the Fabulous Stains (1982) and Teachers (1984), as a student who has an affair with a teacher. (Her mother objected to her active presence on movie sets at age thirteen, which required Dern to sue for emancipation so she could play her role in "The Fabulous Stains"). Her next roles, as the blind girl who befriends the deformed boy in Mask (1985), and as a teenaged girl whose sexual awakening collides with a mysterious older man in Smooth Talk (1985), gave her career an important boost. Dern appeared to have made it with a leading role in David Lynch's acclaimed Blue Velvet (1986), but it was four years before her next notable film, and this was the bizarre Wild at Heart (1990), also directed by Lynch.The following year, Dern starred in Rambling Rose (1991), which would become her signature performance, as a sexually-precocious, free-spirited young housemaid in the South in the 1930s. Dern earned an Oscar nomination for her performance, and so did her mother and co-star, Diane Ladd. Dern continues to win prominent roles on the big screen, often in smaller, highly-regarded human dramas such as October Sky (1999), I Am Sam (2001) and We Don't Live Here Anymore (2004), although she is perhaps most widely known for her repeat role as Ellie Sattler in the summer adventure movies Jurassic Park (1993) and Jurassic Park III (2001), or for her guest performance on Ellen (1994), as the woman to whom Ellen finally comes out as a lesbian.Dern's pre-teen gawkiness matured into lithe beauty, but this doesn't prevent Dern from fearlessly throwing herself into a wide variety of roles which are sometimes unflattering, an excellent example being her unflinchingly comic portrayal of an intensely annoying loser whose pregnancy becomes a social and political football in Citizen Ruth (1996). This results in Dern being one of the most interesting actors working in Hollywood today.Having previously dated such Hollywood talent as Treat Williams, Renny Harlin, Kyle MacLachlan, Jeff Goldblum and Billy Bob Thornton, Dern eventually married musician Ben Harper in 2005. Early in her career, Dern was roommate to Marianne Williamson, the spirituality guru. Dern attended two days of college at UCLA and one semester at USC. - IMDb Mini Biography By: Larry-115

Amazon Video has the most number of Laura Dern’s flixes, followed by Google Play Movies compared to other streaming platforms. See the full graph below.

On average the IMDB score of the movies that Laura Dern has worked on is 6.7.

A pragmatic paleontologist visiting an almost complete theme park is tasked with protecting a couple of kids after a power failure causes the park's cloned dinosaurs to run loose.

Animation,Comedy,Drama
F Is for Family (2015)

Follow the Murphy family back to the 1970s, when kids roamed wild, beer flowed freely and nothing came between a man and his TV.

The true story of Homer Hickam, a coal miner's son who was inspired by the first Sputnik launch to take up rocketry against his father's wishes.

The discovery of a severed human ear found in a field leads a young man on an investigation related to a beautiful, mysterious nightclub singer and a group of psychopathic criminals who have kidnapped her child.