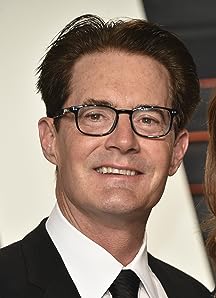 The "boy next door, if that boy spent lots of time alone in the basement", is how Rich Cohen described Kyle MacLachlan in a 1994 article for "Rolling Stone" magazine. That distinctly askew wholesomeness made MacLachlan a natural to become famous as the alter ego of twisted director David Lynch.MacLachlan was born and raised in Yakima, Washington, to Catherine Louise (Stone), a public relations director, and Kent Alan McLachlan, a lawyer and stockbroker. He has Scottish, English, Cornish, and German ancestry. MacLachlan graduated from the University of Washington in 1982. The darkly handsome actor made his feature film debut when he starred in the big-budget David Lynch adaptation of Frank Herbert's Dune (1984), but only enjoyed real success after appearing in a second Lynch project, the moody and perverse classic, Blue Velvet (1986).The following year saw MacLachlan appearing as an otherworldly FBI agent in the cult classic sci-fi film, Hidden (1987). This turned out to be a sign of things to come, as MacLachlan soon took on another oddball G-man, "Special Agent Dale Cooper", on Lynch's cryptic ABC-TV series, Twin Peaks (1990), perhaps, along with Blue Velvet (1986), his most famous role. MacLachlan's remarkable work as Agent Cooper earned him a Golden Globe award and a pair of Emmy nominations, as well as steady work in television and films, including a part as Ray Manzarek in the Oliver Stone film, Les Doors (1991), and villain "Cliff Vandercave" in the live action version of La famille Pierrafeu (1994).His career took a hit after he appeared in the infamous flop, Showgirls (1995). However, MacLachlan returned to prominence in the early 2000s with a re-occurring role on HBO's Sex and the City (1998), as well as a starring role in the TV movie, Le prix de l'éternité (2000), and a turn as "Claudius" in director Michael Almereyda's version of Hamlet (2000). MacLachlan later took advantage of his resemblance to Cary Grant, when he played the classic actor's spirit in Un soupçon de rose (2004).MacLachlan has remained a popular actor with independent filmmakers, and he has also been a familiar face on television, appearing on the ABC-TV shows, Dernier recours (2006) and Desperate Housewives (2004). - IMDb Mini Biography By: Azure_Girl

Amazon Video has the most number of Kyle MacLachlan’s flixes, followed by Vudu compared to other streaming platforms. See the full graph below.

On average the IMDB score of the movies that Kyle MacLachlan has worked on is 6.5.

A documentary series that looks to explore the big questions of today.

A sketch-comedy series that parodies life in Portland, Oregon.

The discovery of a severed human ear found in a field leads a young man on an investigation related to a beautiful, mysterious nightclub singer and a group of psychopathic criminals who have kidnapped her child.

Documentary
CinemAbility: The Art of Inclusion (2012)

An investigation into the way media portrayals impact the actual inclusion of people with disabilities in society.

In Maoist China, a boy is taken from his family and trained to become a dancer, but everything he knows is challenged when he is chosen to attend a ballet summer school in Houston, Texas.